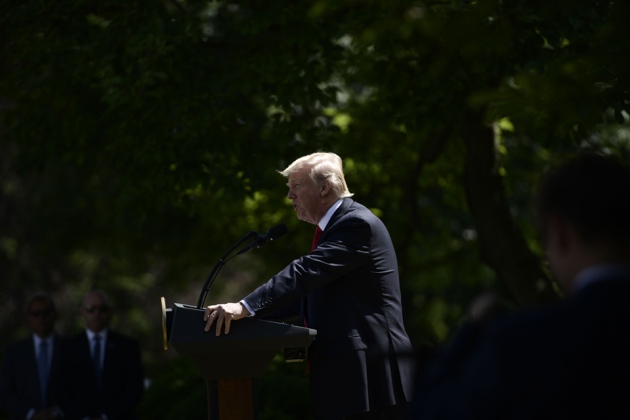 US President Donald Trump says the Paris climate pact is unfair to the United States.

US President Donald Trump has decided to withdraw the United States from the 2015 Paris climate accord, after months of heated debate among members of his administration. More than 190 nations agreed to the pact in December 2015, pledging to hold average global temperatures to 1.5–2 °C above pre-industrial levels.

“The United States will withdraw from the Paris climate accord but begin negotiations to re-enter either the Paris accord or an entirely new transaction on terms that are fair to the United States and its businesses, workers and taxpayers,” Trump said during a press conference in the White House rose garden on 1 June. “This agreement is less about the climate and more about other countries gaining a financial advantage over the United States.”

How scientists reacted to the US leaving the Paris climate agreement

The president added that “as of today,” the United States would stop implementing its Paris pledges, including contributions to the Green Climate Fund to help developing countries deal with the effects of climate change. But Trump also pledged to “ensure that the United States remains the world leader on environmental issues”.

The mechanics of the US exit are complicated. The terms of the Paris agreement prevent the United States from withdrawing from the pact for four years, which means that the final word on US participation would not come before November 2020 — around the time of the next presidential election.

Meanwhile, the United States remains a party to the United Nations Framework Convention on Climate Change (UNFCCC), the foundational agreement under which the Paris accord was negotiated. This means that the country is likely to participate to some degree in international climate talks, just as it did when former President George W. Bush pulled out of another global climate pact ― the 1997 Kyoto Protocol.

In a statement, the UNFCCC said that the Paris agreement “cannot be renegotiated based on the request of a single Party”.

Changing of the guard

Trump's announcement fulfils one of his campaign promises and plays well to his core Republican supporters. But it goes against the wishes of many US business leaders — including some representing fossil-fuel interests — who had lobbied fiercely to remain in the agreement. Twenty-five companies, including technology giants Apple, Facebook and Google, took out an advertisement in major newspapers on 1 June arguing that exiting the Paris accord would harm US economic competitiveness.

The White House has also faced fierce pressure to participate in the Paris agreement from the leaders of other nations, who have vowed to push forward with or without the United States. China, which has overtaken the United States to become the world’s largest greenhouse-gas emitter, has said that it will continue to uphold its Paris pledge.

China is expected to announce a new climate partnership with the European Union on 2 June. But it is not clear whether China and the EU can fill the leadership void left by the United States, which under President Barack Obama played a major part in negotiating the Paris agreement.

“I think it’s very hard to fill the American shoes here,” says David Victor, a climate-policy expert at the University of California, San Diego. “This is more about the diminishing of American leadership and credibility than about the rise of others — yet.”

He notes that even before Trump intervened, the United States was probably not going to meet its Paris commitment, and many other industrialized countries are likely to come up short.

Climate impact of US exit

Trump's move could still give some countries the political cover to scale back their efforts to reduce greenhouse-gas emissions, says Niklas Höhne, a founding partner at the NewClimate Institute in Cologne, Germany. But the US decision does not yet spell doom for the climate itself. That’s because big companies and US states have said that they will go on with their own plans to reduce greenhouse-gas emissions, and energy markets continue to shift away from coal and toward renewable energies.

“Even with the Trump administration in place, the global trend toward renewable energies is continuing — including in the United States,” Höhne says.

An analysis by the Climate Action Tracker, a consortium of researchers, suggests that climate-change policies instituted by Obama would have cut US greenhouse-gas emissions by 10% below 2005 levels in 2025. That is well short of the country's Paris pledge to reduce emissions by 26% over the same period.

The consortium also estimates that US emissions would remain relatively flat if Trump succeeds at rolling back those Obama policies, increasing the country's total greenhouse-gas emissions by 400 million tonnes of carbon dioxide by 2030, compared with previous projections. By contrast, the analysis finds, China and India's efforts to shift from coal to renewable energy are gaining momentum, and could reduce projected emissions by 2-3 gigatonnes of CO2 by 2030.

This story originally misstated the amount that US greenhouse-gas emissions are likely to rise given the US withdrawal from the Paris agreement. It is 400 million tonnes of carbon dioxide, not 400,000.