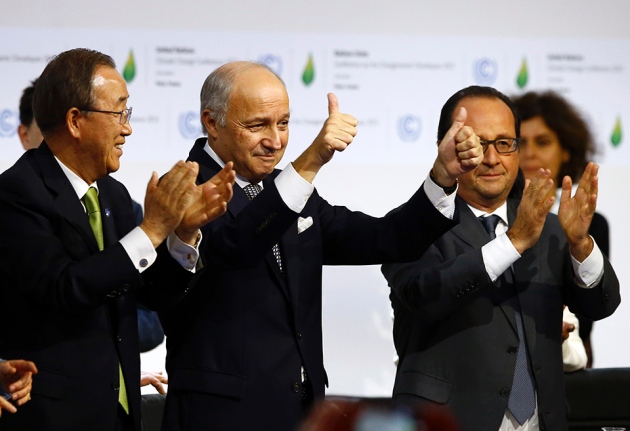 When the gavel came down for the final time at the climate summit in Paris on 12 December, representatives from 195 countries erupted into cheers.

They had approved a landmark plan to combat climate change after two weeks of gruelling negotiations. The agreement commits most countries to reduce their greenhouse-gas emissions, while seeking to protect low-lying islands from rising seas and helping poor nations to develop their economies without relying on cheap, dirty fossil fuels.

The accord, years in the making, seeks to hold warming “well below” 2 °C above pre-industrial temperatures. Countries’ current climate pledges fall short of that goal, but many scientists and governments see the Paris agreement as the last, best hope to set the planet on a course to avoid catastrophic climate change.

“History is written by those who commit, not those who calculate,” French president François Hollande told negotiators after the accord was adopted. “Today you have committed.”

The ambitious 32-page package contains a multitude of provisions to accelerate the world’s transition from fossil fuels to solar, wind, nuclear, hydropower and other clean energy sources.

Nearly every country is asked to play its part in ensuring that greenhouse-gas emissions peak, and then begin to decline, as soon as possible. Countries will assess their progress towards reducing emissions in 2018, and must revisit their climate pledges every five years, beginning in 2020. The aim is that these pledges will become more ambitious over time.

To ensure that countries are keeping to their commitments, the agreement creates a transparent system for measuring, reporting and verifying emissions, while allowing some flexibility for countries that have little capacity to do so. The plan allows for an independent technical review, and all but the smallest, poorest countries will have to report their emissions every two years. But negotiators have left many of the details to be debated at the next major climate talks, in 2016.

“On transparency, the agreement is a little bit loosey-goosey,” says Michael Oppenheimer, a climate scientist at Princeton University in New Jersey. “It could be turned into something that is very effective, but the delegates kicked the can down the road.”

After two weeks of intense negotiations, nations agreed to a global climate deal. Nature Video reports from the heart of the conference.

Others worry about how developing countries can be helped to build their capa­city to monitor emissions. “Transparency and governance are not something you obtain with a decree,” says Joseph Armathé Amougou, director of Cameroon’s National Observatory on Climate Change. He will be responsible for developing and reporting his country’s greenhouse-gas inventory, but he currently has neither the budget nor the employees to do so.

The Paris agreement includes non-binding language that outlines a plan for wealthy nations to increase their climate aid to poorer nations beyond their current commitment of US$100 billion per year by 2020. And developing nations pushed successfully for the pact to recognize that vulnerable countries will face damage from rising seas, raging storms and other impacts of climate change.

The official recognition of damage was a huge achievement, says Mohamed Adow of Christian Aid, an advocacy group based in London. “We now have loss and damage as an integral part of the climate regime.” But the pact explicitly bars poorer nations from seeking compensation or from holding wealthy, major polluters liable for these losses.

Weary negotiators, running on nervous energy and caffeine, approved the Paris agreement a day after their self-imposed deadline — and only after a major push by leaders of the United Nations and the host country.

In a soaring speech, Hollande implored delegates to pass an accord that would send “a message of life” to rebuke the perpetrators of the terrorist attacks that killed 130 people in Paris on 13 November. 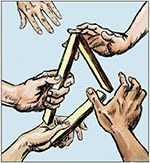 “I will be delighted, relieved, proud, that it be launched from Paris, because Paris was attacked almost exactly a month ago,” he said. “France asks you, calls upon you, to adopt the first universal agreement on climate.”

The long road to the Paris agreement began in Rio de Janeiro in 1992, when nations approved a general ‘framework’ to combat climate change that left the details for later agreements. After 20 annual meetings with little progress to curb ever-soaring emissions, representatives arrived in Paris with pledges from 187 countries that outlined the steps each would take to cut its emissions by 2030.

Never before had so many promises been on the table — but many pledges were hedged with conditions, such as calls for financial aid to build alternative energy plants, save remaining forests or relocate people living in harm’s way. Even if all of the promises were fulfilled, and were followed by substantial additional emissions reductions, the world would warm 2.7 °C by 2100 (see ‘Tight budget’). This is deep into the territory that scientists expect would prompt catastrophic, irreversible climate changes. 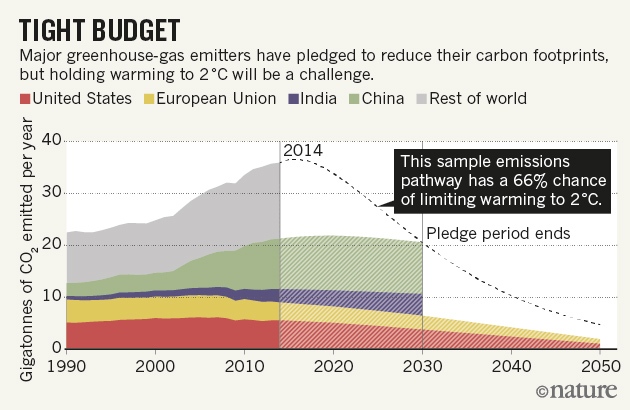 Yet the Paris agreement seeks to limit planetary warming to well below 2 °C, urging nations to pursue an even stricter target, 1.5 °C. To put this in perspective, the average global temperature has already risen 1 °C since the start of the Industrial Revolution.

Many environmentalists say that the agreement and the goals are strong enough to create momentum and put pressure on governments moving forward. “We see the key elements that we have always said we need for a good agreement,” says Nathaniel Keohane, who heads the global climate programme for the Environmental Defense Fund in New York City.

Others say that the Paris accord should prod businesses to pursue clean energy and green growth. “Markets now have the clear signal that they need to unleash the full force of human ingenuity and scale up investments that will generate low-emissions, resilient growth,” said United Nations secretary-general Ban Ki-moon. “What was once unthinkable has now become unstoppable.”

Climate scientists who gathered in Paris to observe the negotiations were pleased with the accord’s ultimate goal, but wanted more details about how nations would achieve significant emissions reductions. “This does not send a clear signal about the level and timing of emission cuts, and does not provide a useful yardstick against which to measure progress,” says Steffen Kallbekken, research director at the Center for International Climate and Energy Policy in Oslo. Although the Paris plan is not inconsistent with the science, he says, it does not reflect the best available research.

The science behind the 2°C limit

The Intergovernmental Panel on Climate Change (IPCC) has concluded that holding warming to 2 °C will probably require emissions to be cut by 40–70% by 2050 compared with 2010 levels, Kallbekken notes. Achieving the 1.5 °C target would require substantially larger emissions cuts — of the order of 70–95% by 2050.

The Paris agreement directs the IPCC to study scenarios for limiting warming to 1.5 °C, and to deliver a report to nations by 2018 to help them determine how much to strengthen their climate commitments.

The fact that the accord prominently mentions the 1.5 °C target is a huge victory for vulnerable countries, says Saleemul Huq, director of the International Centre for Climate Change and Development in Dhaka, Bangladesh. “Coming into Paris, we had all of the rich countries and all of the big developing countries not on our side,” says Huq, an adviser to a coalition of least-developed nations. “In the 14 days that we were here, we managed to get all of them on our side.”