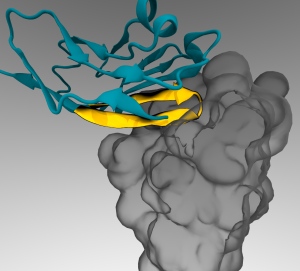 By binding to an immune system cell's receptor (grey), a man-made component (yellow) of a protein could prevent the body from getting rid of a therapeutic nanoparticle.

Small man-made peptides can help to sneak drug-bearing nanobeads past the ever-vigilant immune system, a group of US researchers has found.

To work effectively, drugs and imaging agents need to get to the diseased cells or tumours where they’re needed most. Although scientists are developing nanoparticles that help to deliver drugs to the right place, all therapeutic molecules face a deadly foe — the immune system. Its macrophages are designed to spot any intruding molecules in the blood and destroy them in a process called phagocytosis.

Researchers at the University of Pennsylvania in Philadelphia have now found a way to stop macrophages from destroying drug-bearing nanoparticles. They have designed and made a small segment of a crucial membrane protein called CD47, which is recognized by macrophages as being safe. This means that molecules that contain CD47 can get past macrophages and into blood cells.

Biophysicist Dennis Discher, who led the work, says that he was inspired when he saw another group's work describing the structure of CD47. “I saw a minimal part of CD47 we could take out and make,” he says. This was the part of CD47 that attaches to a macrophage receptor protein, allowing the macrophage to let the protein, and its cargo, into the cell the macrophage is guarding. The work of Discher and his team is published today in Science1.

Using computer simulations to make sure that the CD47 fragment was folded correctly and was stable, the group designed and made a 21-amino-acid peptide based on the fragment. They then stuck the peptide to commercially available polystyrene nanobeads. The beads also carried a dye (or fluorophore) that showed up under fluorescence spectroscopy.

The beads were injected into mice along with the same amount of other beads tagged with a different colour fluorophore but not the peptide. After half an hour, the mouse blood had four times as many beads with the peptide fragment than the other bead, showing that many more of the peptide-tagged beads had got past the macrophage defence.

Buoyed by the evidence that the peptide-carrying nanobeads were circulating in the blood, Discher and his team also tagged their nanobeads with the anticancer drug paclitaxel. They saw that their peptide-carrying system shrank tumours just as well as the standard paclitaxel carrier, Cremophor, but without that carrier's toxic side effects.

Neil Barclay of the University of Oxford, UK, was part of the team that worked out the CD47 structure that inspired Discher’s work2. “It’s neat,” he says of Discher’s research. “It’s a new way of trying to get the immune system to prevent phagocytosis of drugs or particles.”

Discher hopes that the system can be improved with custom-made nanobeads, rather than being limited to the off-the-shelf ones he and his team used. “We want to make this accessible and reproducible,” he says.