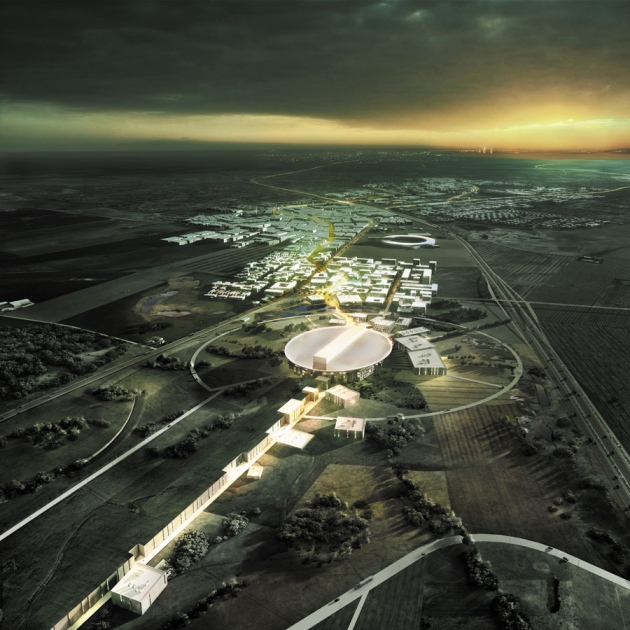 The European Spallation Source will be built in Lund, Sweden (artist’s impression).

There is much to cheer as the celebrations for the International Year of Crystallography begin. Since modern crystallography dawned with X-ray diffraction experiments on crystals by Max von Laue in 1912 and William and Lawrence Bragg (a father and son team) in 1913, and was recognized by Nobel prizes in physics for von Laue in 1914 and the Braggs in 1915, the discipline has informed almost every branch of the natural sciences.

Aeroplanes fly safely because crystallography tests computer models of materials under stress. Drugs are more potent because crystallographers can see and modify how molecules interact with target sites in cells. An X-ray diffraction instrument on NASA's Curiosity rover is now even studying the mineralogy of Mars.

Yet the very strengths of the field — its size and diversity — could prove to be its downfall within a decade. Crystallography is increasingly focusing its resources on large multidisciplinary facilities, such as powerful X-ray and neutron sources. And too few researchers are involved in making decisions about these. As a result, national and local interests are being put ahead of science.

Crystallographers should take a lesson from particle physicists and create a body run by scientists for the governance of large international X-ray and neutron facilities. It should be guided by input from regular meetings of researchers from across the scientific community. This will ensure that the next generation of infrastructure will have the strongest possible scientific case, articulated clearly.

Crystallographers have a raft of methods at their disposal. Von Laue scattered X-ray photons from atoms. Now experimenters can also bombard crystal lattices with electrons and neutrons, and exploit properties such as the polarization of photons and neutrons and their interactions with magnetic fields.

It is still possible to conduct world-class crystallographic research in the laboratory. Materials scientist Dan Shechtman's 2011 Nobel-prizewinning discovery of quasicrystals — metallic alloys that organize themselves in a way that was thought to be forbidden by crystallographic theory — required only an electron microscope of the kind found in most physics and chemistry departments. But increasingly, large national and international synchrotron and neutron source facilities are used to produce the powerful photon or particle beams needed for the most demanding experiments, such as detailed studies of complex macromolecules.

Structural biology has seen particularly exciting progress in the past decade, culminating in the structure of the ribosome, the complex molecular machine that builds proteins from DNA. Driven by the desire to establish the structures of proteins and other biological molecules that are difficult to crystallize, many countries are busy building a new generation of intense X-ray sources — free-electron lasers.

The enormous investments involved — more than €1.1 billion (US$1.5 billion) for the European X-ray Free Electron Laser (XFEL) — have been justified by the hope of illuminating protein nanocrystals, or even single molecules, with intense femtosecond pulses, to capture diffraction patterns before the radiation destroys the structures1. Such 'molecular movies' will benefit other fields, such as the study of matter at extreme temperatures and pressures, and high-temperature superconductivity.

But the enormous political and financial stakes attached to this infrastructure are not matched by the scientific governance necessary to define clear research priorities. As a result, individual crystallographers are disenfranchised and have little control over their future 'means of production'.

Particle physicists, by contrast, chart the future of their discipline2 through an open process designed to get maximum input from the community on a frequent basis. The May 2013 European Strategy for Particle Physics, for example, was drafted at an open symposium in Krakow, Poland, in September 2012 and was coordinated by CERN, Europe's high-energy physics laboratory near Geneva, Switzerland. Such processes allow particle physicists to present a common road map that is scientifically robust enough to withstand political pressures and adverse funding decisions. 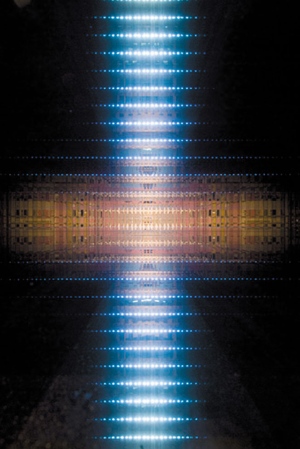 A view down the beam guides at the ISIS neutron source, UK.

Crystallography's lack of an international equivalent to CERN has left national institutes and councils pushing their vested interests. The community's priorities are unclear and its calls for funding are fragmented.

The effects of politics trumping science are being felt everywhere. In the United States, rivalry between national laboratories, state politics and a tendency by the Department of Energy to underfund instrumentation are widely believed to have hampered flagship facilities such as the Advanced Photon Source X-ray synchrotron in Argonne, Illinois, and the Spallation Neutron Source in Oak Ridge, Tennessee.

In the United Kingdom, the ISIS neutron source in Oxfordshire — one of the most innovative and productive neutron facilities worldwide — is run as a national facility, albeit with 25% of the beam time allocated to international proposals. In recent years, UK research councils have left it idle for one-third of the available operating time to save 10% of its energy costs3. This is a disgrace. An international review of ISIS concluded that a 10% increase in its budget would increase productivity by almost 50% (see go.nature.com/3xmjab). Overseas colleagues rarely push their funding bodies for further internationalization of ISIS, instead muttering about the United Kingdom's poor record as a European partner.

For future large-scale facilities, the spotlight is firmly on Europe. The European XFEL, under construction near Hamburg, Germany, will from 2015 deliver short X-ray pulses of around 100 femtoseconds with wavelengths of 0.05–6 nanometres. XFEL will be perfect for studying extremely small crystals of macromolecules and perhaps even single biological molecules. It will also be able to investigate the mechanisms underlying high-temperature superconductivity by taking snapshots of these materials at femtosecond timescales that are relevant for their electronic and magnetic excitations (see pages 604 and 620).

The €1.5-billion European Spallation Source (ESS), for which construction is about to begin near Lund, Sweden, is set to become the most powerful spallation neutron source in the world when it opens in 2019. Neutrons are insightful probes of many material properties, and are complementary to X-rays, but they are in short supply compared to photons, and neutron experiments take much longer. An increase in flux and brilliance over existing sources, coupled with adequate resolution, would enable neutron crystallography on small enzyme crystals, for example.

These large, international facilities are funded by multilateral agreements between governments. The European XFEL will be run as a non-profit company, with the German Electron Synchrotron centre (DESY) as the only shareholder, and 12 European nations currently contribute to the construction and operation costs. The ESS is a public company owned by the Swedish and Danish governments with, at present, 17 partner countries but no final commitment to the construction phase.

European large-infrastructure road maps are drawn up by organizations — such as the European Commission's European Strategic Forum for Research Infrastructures — that are populated by political appointees4. Although these delegates are usually excellent scientists, they mainly represent their governments rather than the research community.

For example, when funding difficulties plagued the European XFEL, following the withdrawal of the United Kingdom in 2009 and reductions in the contributions of other partners5, structural scientists had no way to rush to the project's defence despite the fact that the vast increase in brilliance, by several orders of magnitude, guarantees that XFEL will facilitate discoveries. Fortunately, other countries, including the Russian Federation, have plugged XFEL's €150-million financial hole, and signs are good for a renewed UK participation.

By comparison, the future of European neutron scattering looks precarious. With many smaller sources scheduled to close in the next few years, a lot of budgetary eggs are being put in the ESS basket. But, unlike XFEL, the record power of the ESS is no guarantee of exceptional performance.

The power gain of the ESS, driven mostly by longer pulses (of around 2 milliseconds instead of 10–300 microseconds), improves on existing sources by less than a factor of five in most cases. Longer pulses mean more complex instruments, so scientists will need ingenuity to translate its potential from paper to reality.

Breakthroughs will follow only if the ESS gets the source and instrument design, sample environment, software, support model and staff profile right. Yet the site and scope of the ESS were finalized by a small team long after the last open scientific debate of the technical and scientific cases (ref. 6).

Long pulses are good for many applications in soft matter and biology. But they would be hard pressed to deliver the high resolutions necessary to determine the structures of complex biological molecules, for example. With the running cost of the ESS estimated at €150 million per year, any serious blunder will be a disaster from which European neutron science may never recover.

To maximize scientific output, it is imperative that the ESS and other neutron sources in Europe are used round the clock and fitted with the most potentially ground-breaking instruments. A string of early breakthroughs will persuade the paymasters that neutron science is worth the high investments. And success will encourage them to fund upgrades to ISIS and the Laue–Langevin Institute neutron source in Grenoble, France.

Particle physicists know what the 'next big things' are for them — an upgrade of the Large Hadron Collider (LHC) at CERN and an electron–positron linear collider. Crystallographers should state their priorities with the same confidence.

The first step is for users of multidisciplinary facilities to muster existing bodies, such as the International Union of Crystallography (IUCr) and the European Neutron Scattering Association (ENSA), to establish and present the community view. These organizations should commission independent scientific and technical reviews, similar to the US Astronomy and Astrophysics Decadal Survey, and make recommendations for future projects.

Although this approach may be adequate to coordinate road maps for national facilities of the scale of ISIS, higher-level political power play is necessary for multinational facilities such as the European XFEL and the ESS. An international organization of facility users, with the political muscle of CERN, should be set up urgently to provide governance, mediate with national and international political bodies, and implement community decisions.

In fact, it is questionable whether the multilateral funding model for the largest international facilities is still fit for purpose. With its reputation for excellence, the European Research Council could become the primary funder for the next generation of European facilities, with a suitable increase in its budget (currently €13.1 billion for 2014–20). Extra contributions would come from the host nations, as for the LHC, and other international partners. Such a radical change will not happen immediately, but these ideas should be discussed ahead of the renewal of the European Union Framework Programme for Research and Innovation in 2020.

The 23rd IUCr Congress and General Assembly in Montreal, Canada, in August will provide plenty of opportunities to celebrate the past triumphs of crystallography. It would also be wise for the community to use the occasion to start discussions about securing the field's future.