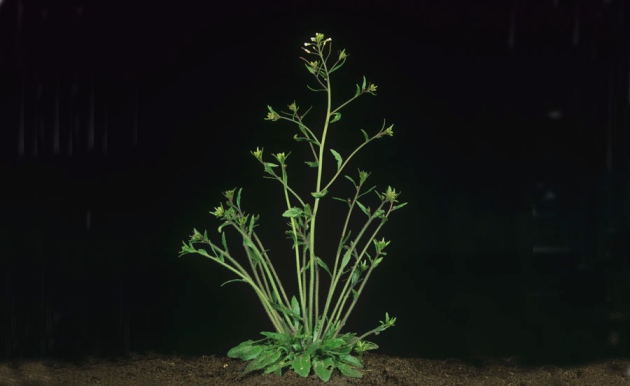 As if making food from light were not impressive enough, it may be time to add another advanced skill to the botanical repertoire: the ability to perform — at least at the molecular level — arithmetic division.

Computer-generated models published in the journal eLife illustrate how plants might use molecular mathematics to regulate the rate at which they devour starch reserves to provide energy throughout the night, when energy from the Sun is off the menu1. If so, the authors say, it would be the first example of arithmetic division in biology.

But it may not be the only one: many animals go through periods of fasting — during hibernations or migrations, for example — and must carefully ration internal energy stores in order to survive. Understanding how arithmetic division could occur at the molecular level might also be useful for the young field of synthetic biology, in which genetic engineers seek standardized methods of tinkering with molecular pathways to create new biological devices.

“This is a new framework for understanding the control of metabolic processes,” says Rodrigo Gutiérrez, a plant-systems biologist at the Pontifical Catholic University of Chile in Santiago, who was not involved in the work. “I can immediately think of applying it to other problems.”

Plants make the starch reserves they produce during the day last almost precisely until dawn. Researchers once thought that plants break down starch at a fixed rate during the night. But then they observed that the diminutive weed Arabidopsis thaliana, a plant favoured for laboratory work, could recalculate that rate on the fly when subjected to an unusually early or late night2.

To Alison Smith and Martin Howard of the John Innes Centre in Norwich, UK, and their colleagues, this suggested that a more sophisticated molecular calculation was at work. The team hypothesized the existence of two molecules: one, S, that tells the plant how much starch remains, and another, T, that informs it about the time left until dawn.

The researchers built mathematical models to show that, in principle, the interactions of such molecules could indeed drive the rate of starch breakdown such that it reflected a continuous computation of the division of the amount of remaining starch by the amount of time until dawn.

For example, the models predicted that plants would adjust the rate of starch breakdown if the night were interrupted by a period of light. During that period of light, the plants could again produce starch. When the lights went out again, the rate of starch breakdown should adjust to that increase in stored starch, the models predicted — a result that the researchers confirmed in Arabidopsis plants.

The team then trawled the literature looking for Arabidopsis mutants with known handicaps at different steps along the starch-degradation pathway. These showed that the models were compatible with the behaviour of these mutants, which result in a higher than usual amount of starch remaining at the end of the night.

To find proteins that might be interacting directly with their hypothesized S/T computation system, the researchers also subjected these mutants to an unexpectedly early night — a situation that would normally cause plants to slow starch degradation. They found one mutant that could not alter the rate at which it consumed starch in response to this situation. That suggests that the mutated gene, called PWD, normally regulates this response, and may be an important player in the plant’s molecular calculations.

Gutiérrez says that the concept of biological arithmetic division provides a simple modelling principle that can stimulate new ways of looking at metabolism, although he is not yet convinced that plants execute division in the way suggested by the model. “Whether the plant is really doing that, I’m not sure,” he says. “But it’s a fascinating approach.”

The series of reactions underlying such processes are not that unusual, notes Howard, and one could readily imagine other scenarios in which chemical reactions help cells perform simpler maths, such as addition, subtraction or multiplication. But making the conceptual leap to thinking of these reactions as carrying out arithmetic functions was an important step in his model-making, says Howard, and helped the team home in on testable predictions.

"We're dealing with a fundamental biological process in cells that's doing a sophisticated arithmetic calculation," says Howard. "No one has really thought about doing it this way before."