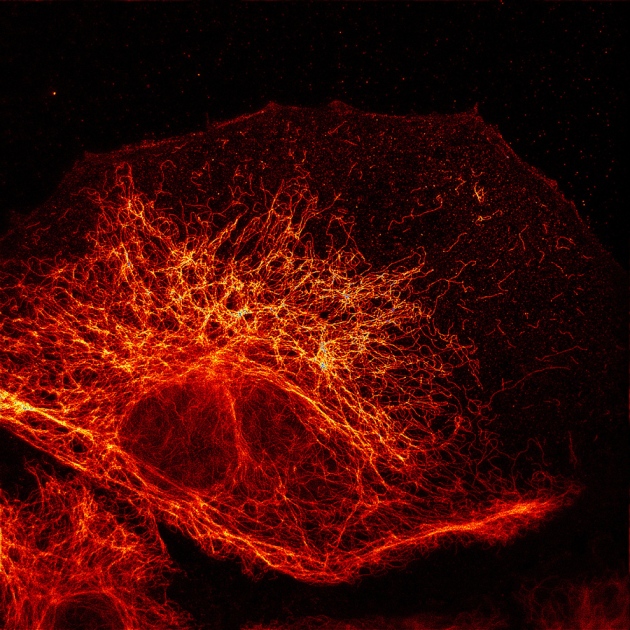 Fluorescence microscopy reveals a protein network in a mammalian cell.

Ever since the seventeenth century, when the early microbiologist Antonie van Leeuwenhoek focused light through lenses and marvelled at the cells that swam before his eyes, microscopes have opened up new vistas of discovery. This year, the Nobel Prize in Chemistry went to three scientists who defied the limits of light microscopes to reveal sharp images of molecular-scale structures in living cells.

The advances made by Stefan Hell, William Moerner and Eric Betzig in the 1990s and 2000s mean that biologists can now see, in real time, how proteins are distributed and move inside cells — at the junctions between neurons, for example, or in fertilized eggs dividing into embryos.

“It is really a revolution for the life sciences, because we can see structures that we could never see before,” says Stefan Jakobs, who works with super-resolution techniques at the Max Planck Institute for Biophysical Chemistry in Göttingen. Or as the Nobel committee put it: “Microscopy has become nanoscopy.”

No matter how clean their lenses, optical microscopes inevitably provide a blurry view of the molecules inside cells, as German physicist Ernst Abbe realized in 1873. The laws of physics dictate that visible light cannot distinguish between objects closer to each other than around 200 nanometres (around half the wavelength of visible light) — they will appear as one blob. Such resolution, known as Abbe's diffraction limit, is good enough to reveal the organelles inside cells but not to see their detailed structures. Microscopes that use beams of electrons, rather than light, have finer resolution, but they can be used only in a vacuum, limiting their use to dead tissue.

Abbe's limit cannot be overcome, but the 2014 Nobel prizewinners pioneered ways to work around it using fluorophores, or fluorescent molecules. Now routinely used in biological imaging, fluorophores emit light when hit by lasers of a certain wavelength. 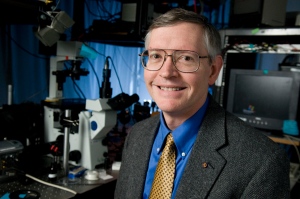 In 1989, William Moerner, now at Stanford University in California, but then at the IBM Almaden Research Center in San Jose, detected the faint fluorescence of a single molecule. In 1997, while working at the University of California in San Diego, he found a way to control the fluorescence and switch the molecules on and off like lamps. Still, these single molecules could be distinguished only if they were more than 200 nanometres apart.

Two years earlier, Eric Betzig, who was at that time working at Bell Labs in Murray Hill, New Jersey, had proposed that if different molecules inside a cell could be made to glow with different colours, researchers should be able to increase the resolution by taking a series of snapshots — first the red molecules, then the green, then the blue. Any fluorophores of the same colour would have to be more than 200 nanometres apart, but the superimposed images would produce a much finer-resolution structure. Moerner went on to show that identical molecules could be made to fluoresce at different times, a discovery that ultimately made Betzig’s vision a reality. 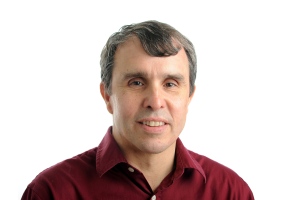 It would take a decade before Betzig demonstrated his idea in practice. He left academic science to work in his father’s machine tool business in Michigan. In 2006, working at the Howard Hughes Medical Institute’s Janelia Farm research campus in Ashburn, Virginia, he used the technique to take a super-resolution picture of a lysosome protein dotted with green fluorescent molecules as labels. The technique can now get down to a resolution of 20 nanometres, says Markus Sauer, who studies super-resolution microscopy at the University of Würzburg, Germany.

Meanwhile Stefan Hell, working at the University of Turku in Finland, had found a way around Abbe's limit by a different technique, which also relies on switching fluorescent molecules on and off. In 1994 he proposed using one laser to make a cluster of dye molecules fluoresce, and a second beam, of a different wavelength, to switch some of those fluorophores off — through a process described by Einstein in 1917.

Hell's trick is to use the second beam to outline the cluster illuminated by the first, so that only the molecules in a very narrow spot fluoresce. The final image remains blurred, as light still cannot beat Abbe’s limit, but it is clear that light can have come only from the narrow central spot defined by the second beam, enabling researchers to pinpoint the light source.

Building up a series of these tiny fluorescent spots creates a fine-resolution picture. In theory, the central spot can be made as small as a few nanometres across, but in living cells, the limit is around 30 nanometres, Sauer says, because it is at this stage that fluorophores are usually destroyed by the intensity of the second beam. 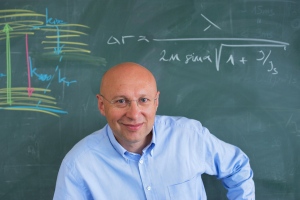 “It was my view, at least, that so much physics happened in the twentieth century that it was impossible there was no phenomenon that would allow you to overcome the diffraction barrier,” Hell, who now works at the Max Planck Institute for Biophysical Chemistry in Göttingen, told the Nobel committee, on learning that he had won the prize.

Indeed, every quantum-physics principle that Hell used had been discovered by physicists by the end of the 1920s, notes Thomas Klar, head of the Institute of Applied Physics at Johannes Kepler University in Linz, Austria, who co-authored the proof-of-principle paper with Hell in 2000.

The call from the Nobel committee caught Hell while he was reading a scientific paper. Afterwards, he said, “I read the paragraph that I wanted to read to the end, then I called up my wife and tried to reach some of the people who are close to me."

The techniques devised by this year's prizewinners are not yet routine but are used by many biologists to take remarkable pictures of structures inside cells. Hell has published videos of vesicles 40 nanometres across moving in a nerve cell. Xiaowei Zhuang, a chemist at Harvard University in Cambridge, Massachusetts, has invented her own variation, called stochastic optical reconstruction microscopy, and used it to show how actin filaments wrap around the circumference of axons in a ring-like pattern. "There will be many new versions of super-resolution microscopes in future," Hell says.