The ribosome, the molecular machine that translates our genetic code to build the body’s proteins, is a mechanical marvel. Now, chemists have invented a nanomachine that can achieve a similar feat.

The artificial system is not about to displace nature’s ribosome, a complex of proteins and RNA. It is much simpler, and only about about one-tenth of the size — and, it is achingly slow, destroys the code it reads and can produce only very short chunks of protein, known as peptides. It does, however, show that some of the tactics of biology’s molecular machines can be adopted to make useful chemicals.

“We were inspired by the ribosome,” says synthetic chemist Dave Leigh at the University of Manchester, UK, who led the team behind the development. “But our machine is extremely primitive compared to the ribosome.” 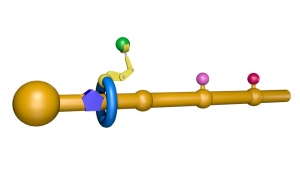 With molecules for moving parts, this nanorobot links together amino acids (colored balls) by attaching them to a moving ring (blue).

Leigh’s system relies on a rotaxane — a large molecular ring threaded onto another molecule that acts as an axle. The axle is lined with three amino acids, and a chain of three more amino acids hangs from the outer edge of the ring. One of the amino acids attached to the ring is cysteine, which contains a crucial sulphur-containing thiol group1.

Heating the system prompts the thiol group to pluck an amino acid from the axle and transfer it to the end of the chain of amino acids attached to the ring. The ring can then move along the axle and repeat the same trick with the next two amino acids. Unthreading the ring and breaking off the newly-formed chain delivers a perfectly formed peptide made from all six amino acids.

“It’s one of Dave’s best papers,” says physical organic chemist Alan Rowan at Radboud University Nijmegen in the Netherlands, who also works with rotaxanes. “It’s the first example of a rotaxane performing a sequential reaction, and that’s a big step forwards.”

Although Leigh’s rotaxane mimics the ribosome in its sequential building of peptides, the sulphur-assisted amino acid transfer is found elsewhere in biology: some bacteria rely on it to synthesize proteins. It has also become a standard technique in laboratory protein synthesis.

Running about 1018 of Leigh’s molecular machines at once can produce tens of milligrams of peptide. But it is a slow process, taking about 12 hours to attach each amino acid in the sequence. The ribosome, by contrast, attaches 15–20 amino acids per second.

In its present incarnation, the nanomachine requires the axle to be preloaded with amino acids in the correct sequence. This mean that it can assemble just one peptide, by contrast with the ribosome, which grabs amino acids out of the liquid medium in which it is immersed and assembles them in the right order according to a nucleic-acid template. In the future, the team hopes to develop a version of the machine that can do something similar. Its axle would have selective binding sites. Once the amino acids have been stripped off the axle, the axle would 'reload', with new amino acids binding to those sites in the right order.

Leigh’s machine will probably never compete with automated methods of making peptides. But he hopes that it could help to move chemistry beyond its two-centuries-old habit of making molecules using stepwise processes — adding a chemical group, purifying and isolating the product, then adding another group. “It’s laborious and not as effective as biology,” says Leigh.

Leigh and other chemists have already used rotaxanes to move droplets of fluid around2; encode binary data3; deliver drugs to specific sites4; and even switch a chemical catalyst on or off5.

Molecular machines inspired by biology could eventually enable chemists to build materials with a specific sequence of molecules — a strand of polystyrene in which each component bears one of a range of extra chemical groups, for example. This could give the materials unusual chemical or physical properties, or even allow them to be encoded with information, as nature does with DNA. “That’s how biology does it, so why can’t we?” asks Leigh.