Iceberg set adrift from Larsen C shelf A 1-trillion-tonne iceberg has broken away from the Larsen C ice shelf in Antarctica. Scientists had been monitoring a rift in the shelf for the past year. Satellite measurements indicate that the segment was set adrift in the Weddell Sea sometime between 10 and 12 July. The resulting iceberg is one of the largest on record, at around 5,800 square kilometres — about the size of Delaware — and it reduced the size of the ice shelf by more than 12%. Researchers fear that the Larsen C ice shelf may become less stable as a result of the break. 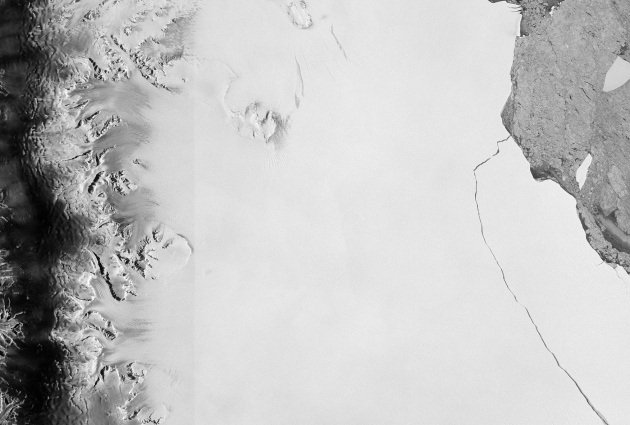 Discrimination suit Two researchers have sued the Salk Institute for Biological Studies in La Jolla, California, for alleged gender discrimination. Molecular biologists Katherine Jones and Victoria Lundblad filed legal complaints on 11 July with California’s state court, alleging a hostile work environment dominated by an “old boys club” culture. Lundblad’s complaint noted that 28 male Salk faculty members are full professors with tenure, whereas only 4 women have achieved the same rank. In a 13 July statement, the Salk countered that its president and most of its executive leadership team is female, and said that Jones and Lundblad, who are both tenured professors, had been treated generously relative to their male colleagues.

Activist death toll At least 200 people were killed in 2016 for trying to protect natural resources or safeguard land rights — a record number, according to a report by the environmental campaign group Global Witness, headquartered in London. Almost 40% of those killed were indigenous people; others include park rangers, lawyers and staff of non-governmental organizations. Latin America saw 60% of the murders; in Brazil alone, 49 people were killed, many by Amazon loggers and landowners. In 2015, Global Witness recorded 185 killings.

Quantum teleport A Chinese satellite has teleported quantum states from Earth to a satellite in orbit — the longest distance so far demonstrated for this process. In quantum teleportation, which could ultimately be used for secure communications, a particle’s quantum state is transmitted to a particle elsewhere using a different pair of ‘entangled’ particles. China’s Quantum Experiments at Space Scale (QUESS) mission has already produced pairs of entangled photons on Earth and in a satellite; it has now used these to transmit quantum states between a photon in Ngari, Tibet, and one on the satellite. The report was posted on the arXiv server on 4 July (J.-G. Ren et al. Preprint at http://arxiv.org/abs/1707.00934; 2017).

Planetary portrait Jupiter’s Great Red Spot glares balefully in the closest images ever taken of this otherworldly storm. NASA’s Juno spacecraft captured the photographs on 10 July as it zipped just 9,000 kilometres above the crimson anticyclone. Astronomers have been observing the Great Red Spot since 1665, but did not have up-close images until NASA’s Voyager probes visited in 1979. In recent years, the storm has been shrinking — although it could still swallow Earth with room to spare — and Juno’s images might reveal details that explain why. The feature contains many small vortices that churn within the larger storm, as well as patterns of turbulence that ring it. The images promise to shed light on the atmospheric dynamics powering the storm both among and beneath the cloud tops.

Fields medallist dies Maryam Mirzakhani, the first woman to win the most coveted award in mathematics, the Fields Medal, died on 15 July, aged 40. The Iranian mathematician, who won the award in 2014, was at Stanford University in California, and worked at the intersection of geometry and dynamics. She studied the trajectories of billiard balls, or point masses, on non-Euclidean surfaces, where parallel lines can intersect or veer apart. In 2008, she solved a long-standing problem concerning how many trajectories that do not intersect themselves can exist on such a surface.

Space-council chief US President Donald Trump has chosen Scott Pace to serve as executive secretary of the National Space Council, the White House said on 13 July. Pace, currently director of the Space Policy Institute at George Washington University in Washington DC, held top positions at NASA and the White House Office of Science and Technology Policy under former president George W. Bush. Trump has revived the National Space Council after a 24-year lapse. The group coordinates space policy among government agencies and departments, and is led by vice-president Mike Pence.

DOE nomination Investment banker Paul Dabbar has been chosen by US President Donald Trump as undersecretary for science at the Department of Energy (DOE). Dabbar is the managing director for mergers and acquisitions at J.P. Morgan Chase, and has investment experience in a range of renewable and fossil-fuel technologies, according to the White House. If confirmed by the Senate, Dabbar would lead the DOE’s Office of Science, whose US$5.4-billion research portfolio ranges from biological and environmental research and advanced computing to nuclear fusion and high-energy physics. The administration has proposed cutting the Office of Science’s budget by roughly 16% in 2018.

New icebreakers The US Coast Guard should build four heavy ice-breakers to replace its ageing fleet, the National Academies of Science, Engineering, and Medicine said in a report released on 11 July. US scientists rely on three Coast Guard ships and a smaller ice-breaker operated by the National Science Foundation to conduct polar research. Only one of the Coast Guard’s vessels, the 41-year-old Polar Star, can break through thick ice. The Healy is not powerful enough and the Polar Sea was mothballed because of engine failure in 2010. Acquiring new heavy ice-breakers would allow the government to meet its national-security needs while ensuring scientific access to the poles, the report says. Each ship would cost about US$791 million.

EU science cash The European Council of Ministers is seeking to cut next year’s proposed budget for the European Union’s flagship Horizon 2020 science-funding programme. The European Commission had sought €11.1 billion (US$12.8 billion) for 2018, but plans released by the council on 12 July cut that to €10.6 billion. The programme’s 2017 budget is €10.3 billion. The council also wants to trim the proposed budgets of the Galileo and Egnos satellite-navigation programmes, the Copernicus Earth-observation programme and the European Union’s participation in the ITER nuclear-fusion project; however, cash for the student-exchange programme Erasmus+ remains untouched. The European Parliament, which jointly decides the budget, is likely to fight for a return to the commission’s position. The parties must agree on a plan by 20 November.

AI for Earth Microsoft launched a programme called AI for Earth on 12 July to make its artificial-intelligence expertise and cloud-computing resources available to Earth and environmental scientists. The company is soliciting proposals for research projects with a focus on agriculture, water use, biodiversity and climate change that involve the collection and processing of a large amount of data. Researchers need to be based in a country where Microsoft offers cloud computing. On the same day, the company also announced the creation of a 100-strong artificial-intelligence research team, which will include existing employees and new recruits.

The rise of zebrafish (Danio rerio) as a research tool is highlighted in UK annual statistics on animal-research procedures, released on 13 July. Most of the 3.9 million animals used in UK labs in 2016 were mice (73%), but zebrafish numbers rose to 11% of the total, up from 8% in 2013. Tumours in zebrafish and humans grow in similar cellular environments, making the animal a popular model for some cancer researchers, notes Joel Winston, a spokesperson for Queen Mary, University of London. 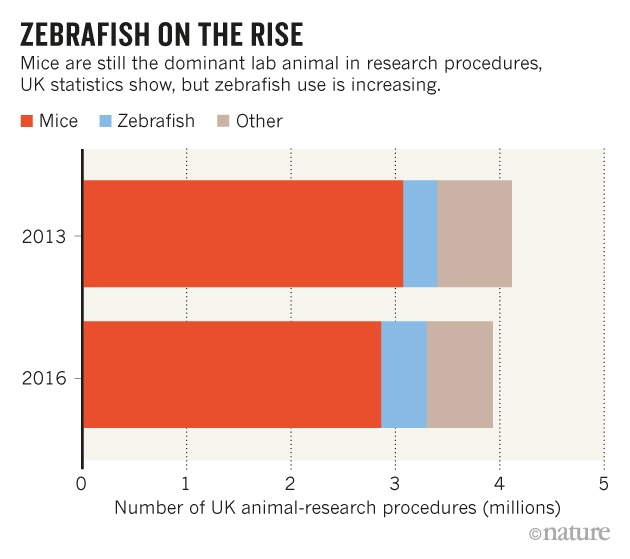 BGI sells shares The Chinese genomics giant BGI made its long-awaited initial public offering on 14 July. The company raised 547 million yuan (US$80 million) on the first day of trading on the Shenzhen Stock Exchange. Shares rose by 44% from their initial asking price, hitting the exchange’s first-day cap for share-price increase, and rose another 10% on the second day of trading. BGI, based in Shenzhen, was previously the world’s biggest genome sequencer for basic research, but has increasingly turned its focus to profitable medical applications of sequencing; it plans to use the cash to improve its tools for reproductive medicine and cancer diagnosis. Analysts say the company’s stock is still undervalued and expect it to keep rising.