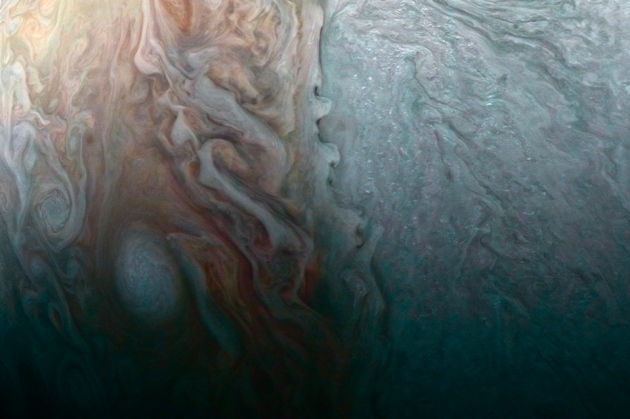 The Juno spacecraft is equipped with instruments that can pierce the swirling clouds that surround Jupiter.

The sharpest look yet at Jupiter has revealed a number of surprises — including a surge of ammonia welling up from its gassy depths, a startlingly powerful magnetic field and what could be a large, but poorly defined, core.

NASA’s Juno mission began to capture these insights on 27 August last year, during the first of a series of close swoops past the planet. Preliminary results appeared on 25 May in Science and Geophysical Research Letters.

As the first spacecraft to explore Jupiter in more than a decade, Juno “is revolutionizing how we thought giant planets work”, says Scott Bolton, a planetary scientist at the Southwest Research Institute in San Antonio, Texas, and the mission’s principal investigator.

Juno, which launched in 2011, has gathered stunning images of oval-shaped cyclones clustered around the giant planet’s north and south poles. But it also probes beneath the cloud tops, using a microwave-emitting instrument that can see through the swirling storms and into the planet’s heart1.

Planetary scientists expected Jupiter’s gases to be well mixed down to hundreds of kilometres beneath the cloudtops, but Juno revealed a patchy interior. The spacecraft found surprisingly low levels of ammonia in most places — but identified an ammonia-rich plume rising from the depths at Jupiter’s equator. “That, frankly, has got a lot of people scratching their heads,” says Leigh Fletcher, a planetary scientist at the University of Leicester, UK.

Ammonia on Jupiter might be distributed similarly to water vapour on Earth, with higher humidity along the equator and lower levels at higher latitudes, says Cheng Li, a planetary scientist at NASA’s Jet Propulsion Laboratory in Pasadena, California, who led one of the studies2.

Similarly, Juno’s magnetometer detected a powerful but patchy magnetic field — both stronger and more variable than models have suggested3. The magnetic flux is stronger near the equator, possibly because material inside the planet churns and distorts the magnetic field — similar to how sunspots are created, says Kimberly Moore, a planetary scientist at Harvard University in Cambridge, Massachusetts, and lead author of one of the papers4.

Thrown for a loop

Jupiter’s magnetic field is also more complex than expected in the regions where it streams outward from the planet. “Rather than having one big wire carrying all the current, you’ve got multiple little wires all spread out,” says Fran Bagenal, a planetary scientist at the University of Colorado Boulder. This scattered pattern means that the structure and origin of Jupiter’s northern and southern lights are more complicated than previously thought, because the electrically charged particles that produce them are flowing along a variety of paths.

Other measurements from Juno hint that Jupiter has a surprisingly large core made of heavy elements. Each time Juno whizzes past the planet — just a few thousand kilometres above the cloudtops — Jupiter’s gravitational tug nudges the spacecraft’s orbit. Team scientists have analysed that nudge and calculated that the planet has a core that amounts to some 7–25 times the mass of the Earth5. The core could be both larger and more diffuse than expected, extending out to as much as half of Jupiter’s 70,000-kilometre radius.

Juno is taking longer to complete its mission than originally planned, because of a glitch with two engine valves that has kept it looping around Jupiter every 53 days rather than tightening its orbit down to 14 days. The spacecraft has completed 5 of 32 planned science fly-bys, and the next one will occur on 11 July, over the planet’s Great Red Spot.