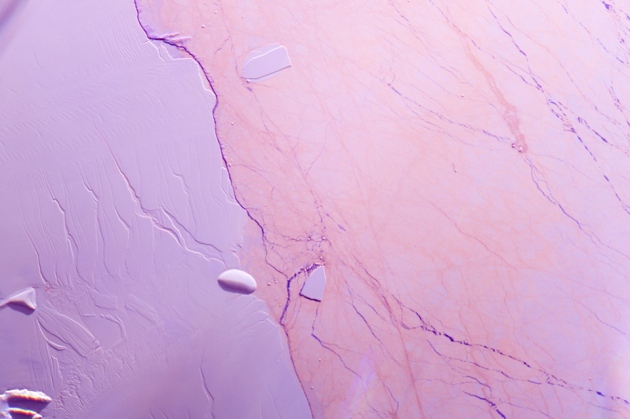 A giant rift in the Larsen C ice shelf (shown here dividing the purple and pink areas) is expected to reach the ocean soon.

A massive crack in Antarctica’s fourth-biggest ice shelf has surged forward by at least 10 kilometres since early January. Scientists who have been monitoring the 175-kilometre rift in the Larsen C ice shelf say that it could reach the ocean within weeks or months, releasing an iceberg twice the size of Luxembourg into the Weddell Sea.

The plight of Larsen C is another sign that global warming is destabilizing ice along the eastern Antarctic Peninsula and raising sea levels. But scientists' studies of the rift also illuminate how far glaciology has come since the collapse of the ice shelf’s northern siblings: Larsen A in 1995 and Larsen B in 2002, which occupied separate embayments further out along the peninsula.

“Larsen B was a turning point in our understanding,” says Ala Khazendar, a geophysicist at NASA’s Jet Propulsion Laboratory in Pasadena, California. “It was the biggest collapse of its kind up to that point, and it served to demonstrate how ice shelves regulate the movement of ice from the interior of the ice sheet to the ocean.”

For decades beforehand, researchers had debated the extent to which ice shelves buttress glaciers on land — acting like corks that slow the land ice’s inevitable march to the sea. The late Bob Thomas, a NASA glaciologist who helped to popularize the idea, went so far as to uncork a bottle of wine and pour some out to demonstrate the effect during his talks.

Satellite data collected after Larsen B collapsed largely settled the debate1, 2. The speed at which glaciers connected to Larsen A and B flowed to the sea increased — by up to a factor of eight — after those ice shelves disintegrated, says Eric Rignot, a glaciologist at the University of California, Irvine. “Some of [the glaciers] have slowed down a little bit, but they are still flowing five times faster than before,” he notes. Khazendar and his colleagues have also found that two glaciers flowing into Larsen B started to accelerate before its collapse, as the ice shelf weakened.

Since Larsen B’s collapse, ice-sheet modellers have tweaked their simulations to better reflect the forces driving glacial flow and to help quantify this corking effect — bolstering confidence that limited observations from the Larsen ice shelves could be applied more broadly.

Researchers are now looking back to the history of Larsen A and B (see 'Cracking up') to understand what the future might hold for Larsen C, which covers 50,000 square kilometres with ice up to 350 metres thick. Many fear that the expanding crack is a sign that Larsen C has begun a long decline that will inevitably end in its total collapse. How soon that could come after the iceberg breaks off is an open question.

The effects of a collapse could be felt far beyond Antarctica. The glaciers that flow into Larsen C contain enough water to raise the global sea level by about a centimetre — and they are likely to flow faster to the ocean in the absence of an ice shelf. In comparison, global sea levels are rising by about 3 millimetres a year, and a recent study estimated that one-third of that comes from ice loss in Antarctica and Greenland3.

Satellite images show that Larsen C has been receding since the 1980s, and radar measurements suggest that its ice is also thinning, Rignot says. Scientists have also seen meltwater ponds forming on the ice shelf’s surface 4; the same sort of ponds probably hastened the disintegration of Larsen B by carving holes in the ice and expanding cracks.

The ice sheet is protected, to some degree, from rapid collapse by favourable seafloor geometry. A pair of underwater ridges that surround Larsen C create friction that slows the flow of ice to the ocean.

Still, the parallels with the decline of Larsen B are striking, says Adrian Luckman, a glaciologist at Swansea University, UK, who heads a team that has monitored the Larsen C ice crack for several years. Larsen B experienced a major iceberg-calving event in 1995, followed by gradual retreat and then complete collapse seven years later. Larsen C may follow a similar pattern, he says, although it’s not clear how soon collapse might follow the imminent calving event.

For now, researchers are anxiously watching the expanding ice rift. Chris Borstad, a geophysicist at the University Centre in Svalbard, Norway, is particularly interested in Larsen C’s ‘suture zones’ — areas where glacial ice flows off land and merges. The ice is softer in these areas, which are often held together by ice that freezes from below.

Dozens of significant cracks run into one of these zones on Larsen C, and then stop, he says. The current crack was among them, but it somehow broke through in 2014 and has continued to expand ever since. It's not clear why the crack made it through the soft ice, and whether other rifts will follow suit in the coming years.

“We don’t know why, but there’s something very effective about these boundaries for stopping cracks, and that may be the key,” Borstad says. “To answer that question, we really need to get out there into the field.”

An earlier version of the story erroneously stated that two glaciers feeding the Larsen C ice shelf had started to accelerate. It also gave the wrong citation for reference 1.