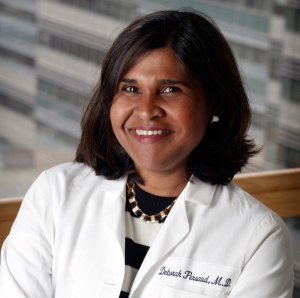 Virologist Deborah Persaud described the case of an infant born to an HIV-positive mother but who is now practically rid of the AIDS-causing virus.

Hungry for more details about the child who has apparently been cured of HIV, researchers are puzzling over how it happened and the possible implications for other patients.

Deborah Persaud, a virologist at the Johns Hopkins Children's Center in Baltimore, Maryland, described the case of the child on 4 March at the 20th annual Conference on Retroviruses and Opportunistic Infections in Atlanta, Georgia.

“This takes some tools that we’re using anyway and uses them to accomplish our big goal,” says Ron Swanstrom, a virologist at the University of North Carolina at Chapel Hill. “This is highly significant.”

Doctors started treating the baby, who was born to an HIV-positive mother, before the infant was 30 hours old. Treatment continued for 18 months, until the child's family stopped it. When doctors in Mississippi saw the child 10 months later, they worked with researchers including Persaud to confirm that there was no virus detectable in the infant's blood.

Persaud says that the child, now 2.5 years old and not taking medication, is still healthy — although tests show that viral DNA remains.

The child is one of only two people known to have been 'functionally' cured of HIV. It is difficult to prove that people with functional cures ever completely clear HIV from their bodies, but they effectively control the virus, and their immune systems stay healthy without treatment.

Timothy Ray Brown, known as the 'Berlin patient', was the first person known to have been cured of HIV: doctors reported in 2008 that he was given a bone-marrow transplant that replaced his own immune cells with cells invulnerable to the virus, and achieved a functional cure. But the technique is deemed too risky for most people with HIV.

It is not clear how the antiretroviral drugs cured the infant. Persaud says that part of the answer probably lies in starting the treatment very early, and in using more drugs than are usually given to infants born to HIV-positive mothers.

It was already known that treating a pregnant woman who has HIV can prevent her child from ever becoming infected, but the latest finding shows that if this is not done, “there is enough rationale to think that very early therapy may accomplish this [cure] in more than one infant”, says Persaud.

Persaud says she is planning clinical trials to test her hypothesis. But for now, the World Health Organization said that it will not change its guidance to provide antiretroival treatment to HIV-positive women and to their babies, to prevent the infants from becoming infected. “The implications of this case study are not very clear at this point until more information becomes available,” the organization said in a statement.

Robert Siliciano, a molecular biologist at Johns Hopkins University, says that the infant probably received treatment before making any memory T cells — immune cells that can harbour HIV indefinitely. Because of this, Siliciano says, “there was no stable reservoir for the virus, and after a couple of months, she seemed to be cured”.

Other researchers, however, point out that it is difficult to subject a toddler to an in-depth study of cells and tissues as was done for Brown, so it may be difficult to verify the cure or determine its mechanism. Indeed, Swanstrom says, the child may be an 'elite controller' — one of the rare people whose immune system is naturally able to keep the virus in check. And it is unlikely that many other people could be cured in this way: in adults, starting treatment even as soon as two weeks after infection does not provide a cure.

But the case is an important demonstration to researchers who are searching for strategies to cure people with HIV. “It’s nice to think that if you prevent establishment of the reservoir, this disease becomes curable,” says Siliciano.