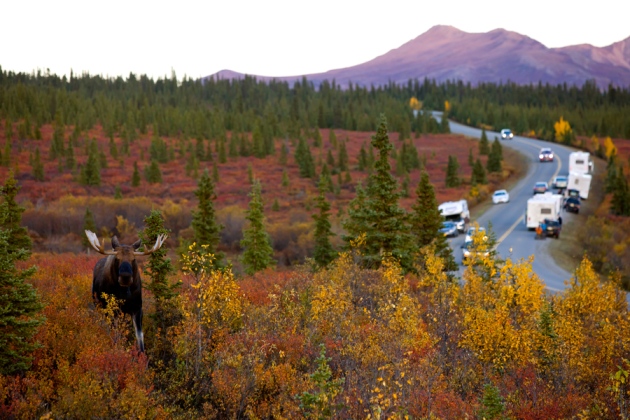 When people visit wild places in the United States, they bring noise pollution in addition to their cameras.

Tourists who visit national parks and other protected areas in the United States hope to gain a respite from the sights and sounds of their everyday lives. But evading human soundscapes isn’t easy. Many protected areas are surprisingly noisy, a new study finds, and that can interfere with more than just the peace and quiet visitors seek.

Noise generated by humans — including that from development activities, traffic and the extraction of natural resources — threaten the survival of plant and animal species across the country1, researchers report on 4 May in Science.

“I was frankly shocked to learn how noisy humans have made some of the most remote places on the continent,” says Charlie Zender, an atmospheric physicist at the University of California, Irvine, who was not involved in the research.

To investigate the noise in protected areas, Rachel Buxton, an acoustic ecologist at Colorado State University in Fort Collins, and her team used data routinely collected by the US National Park Service (NPS) that map sound levels across the country. The information included over 1.5 million hours of recordings from 492 protected sites across the United States, such as city parks and remote areas.

To determine how much noise came from human activity, the researchers made a background noise model that eliminated all potential sounds created by people, such as aeroplane or car noises. The researchers then compared their estimates of wild soundscape noise levels to the NPS maps, allowing them to determine the extent to which human-made sounds added to noise levels in the protected areas.

This study “has really put noise on the map”, says Clinton Francis, an ecologist at California Polytechnic State University in San Luis Obispo, who was not involved with the study. Previous research has shown that noise pollution affects the behaviour of animals, including how they search for food2, 3. But this work is much wider in scope, looking at the breadth of sound exposure across the contiguous United States, Francis says.

The researchers found that 63% of the protected areas were twice as loud as they should be. “So if you used to be able to hear a bird song at 100 feet [30 metres], now you could only hear it at 50 feet,” Buxton says. Some areas were even louder: 21% were more than 10 times louder than background levels. In those regions, “you can only hear that bird at about 10 feet”, she says.

Many of these spaces are critical habitats for endangered species. The team found that sound levels were doubled compared to the background model in 58% of these environments, and that plants and invertebrates in these areas experience high noise levels. For plants, this happens through indirect effects such as the altered behaviour of pollinators, plant-eating species or animals that disperse seeds.

Francis would like to see follow-up studies looking at the impact of loud noise levels on species in protected areas. For instance, noise pollution is known to influence how animals disperse piñon pine tree seeds in New Mexico4.

There is some good news, however. About one-third of the protected areas the team analysed still had undisturbed natural soundscapes — which is good for the plants and animals in those areas, and can also have health benefits for people who visit5. And the researchers found that, overall, protected regions were often quieter than the unprotected spaces directly surrounding them. In addition, areas with the highest levels of protection, deemed ‘wilderness areas’, were the quietest. So designating an expanse as protected seems to keep the sound turned down.

The researchers hope that their results can influence policy decisions to better manage sound in these spaces. But for now, “really listen when you go to a park,” says Buxton. “Listen to everything from just the flow of the river to these magnificent choruses of birds and bugling elk. Not only does that enhance your experience, it’s important for your health.”