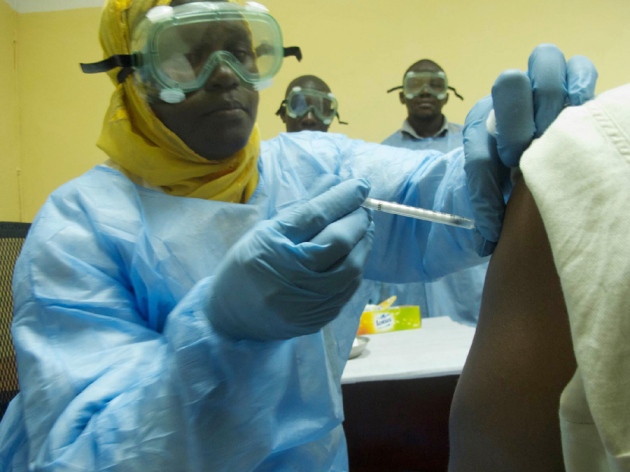 A volunteer receives an experimental Ebola vaccine in Mali during a preliminary safety trial in October.

As the West African Ebola epidemic enters its second year small batches of experimental vaccines are on the cusp of reaching people in the affected countries. Nature tackles the questions that will determine whether vaccines play a role in ending the current epidemic — and can prevent future flare-ups.

What Ebola vaccines are being developed?

Two vaccines are leading contenders to be deployed in West Africa early next year. The furthest along is one co-developed by London-based drug firm GlaxoSmithKline (GSK) and the US National Institute for Allergy and Infectious Disease (NIAID) in Bethesda, Maryland. Their vaccine is made of an inactivated chimpanzee cold-causing adenovirus (called ChAd3) that has been engineered to produce an Ebola protein.

The second leading candidate is a vaccine from NewLink Genetics in Ames, Iowa. This is made from a weakened but active livestock virus, known as VSV. It was licensed in November to the New Jersey drug company Merck.

A third possibility combines two vaccines: a 'prime' made from a different chimp adenovirus, developed by US drug firm Johnson & Johnson and NIAID, and a 'booster' made by Bavarian Nordic in Denmark that is composed of a poxvirus that expresses an Ebola protein and given several weeks later.

Many vaccines come with side effects, and Ebola inoculations are no different. “We’re not seeing anything on the safety side that’s unexpected,” says Ripley Ballou, head of GSK's Ebola vaccine programme in Rixensart, Belgium.

The NewLink–Merck vaccine could pose greater safety concerns because it is made of a live virus that, although weakened (or 'attenuated'), can still divide in the body. On 11 December, a safety trial of 59 volunteers who received this vaccine was halted one week early, after four patients reported pain in their hands and feet. University Hospital in Geneva, Switzerland, which is running the trial, said that it would resume on 5 January 2015 with a maximum of 15 volunteers. Merck says that the Geneva trial will procede with lower doses. Meanwhile, other trials are testing a range of doses.

How will these vaccines be tested?

Only efficacy trials — slated for next year in Liberia and Sierra Leone — can determine whether a vaccine can prevent Ebola infection. But researchers are scouring data from safety trials to identify the doses and regimens that offer the best chances of working. Those decisions will be made by mid-January, according to Ballou.

One big question is whether the GSK–NIAID vaccine will need to be accompanied with a booster shot (such as the one manufactured by Bavarian Nordic). Monkeys that were protected from Ebola infection by a similar vaccine had received a booster. But a single-shot regimen would be simpler to administer during the current epidemic in West Africa, as well as future Ebola outbreaks.

Adrian Hill, a vaccine scientist at the University of Oxford, UK, who is leading a safety trial of the GSK–NIAID vaccine in the United Kingdom, is a proponent of a booster. Tests of vaccines against other diseases have shown that boosters can drastically increase the levels of infection-battling antibodies and T cells, a type of white blood cell. On 12 December he told a Washington DC conference on Ebola immunology that Bavarian Nordic's booster worked as expected. Fourteen volunteers who got the booster several weeks after their first shot produced higher levels of antibodies within a week (compared with levels in their blood after the first vaccination) and these responses were similar to those seen in monkeys protected from Ebola.

Hill says that a booster might be the only way to get an Ebola vaccine that prevents infection. Others, such as NIAID director Anthony Fauci, argue that a booster shot is important mostly for prolonging vaccine protection and that higher doses of the first shot should be effective in the short term.

What’s going on with trials in West Africa?

Many details are still being hammered out, but at least two large-scale efficacy trials (phase 3 trials) are in the offing.

The Liberia trial will probably enrol around 30,000 people living in Monrovia. The plan is for volunteers to be randomly assigned to receive either the GSK–NIAID vaccine, the NewLink–Merck vaccine or a saline-solution injection that will serve as a placebo control. But it is unclear how the suspension of the NewLink–Merck safety trial in Geneva will affect those plans. “If that means it is not going forward rapidly for safety reasons, it would impact on plans for the efficacy trial in Liberia,” Hill says. One possibility is to delay this arm of the trial until additional safety tests are completed.

A phase 3 trial of around 6,000 health-care workers in Sierra Leone is also in the planning stages. The current strategy is for all the volunteers to receive a vaccine (yet to be selected) in a phased roll-out. Researchers will determine whether the vaccine works by comparing infection rates among vaccinated and unvaccinated people.

Officials are also discussing the possibility of a third efficacy trial to test whether a strategy known as ring vaccination can quell the epidemic. In this approach, patients living around a newly diagnosed case are vaccinated, in an attempt to prevent transmission.

Will these trials include booster shots?

A booster shot may not be needed for the GSK–NIAID vaccine in the Liberian trial, because volunteers living in the community are unlikely to be regularly exposed to Ebola over a long period of time, Ballou says. “I think it’s important to know whether a single-dose vaccine is protective,” he adds. “For widespread population usage, a one-dose vaccine is fantastic.”

Including a booster shot makes more sense among health workers, because they are facing a prolonged risk of infection, says Ballou. It will also be simpler to track down health workers for a second shot, compared to people in the general community. But no final decision has been made. One possibility is to give a booster to a subset of volunteers, so scientists can work out whether that regimen is any more effective at preventing Ebola infection, compared to a simpler single dose.

Who will pay for the vaccines?

On 11 December, GAVI, the Vaccine Alliance — a Geneva charity that helps low-income countries to afford vaccines — announced that it would commit up to US$300 million to purchase 12 million doses of Ebola vaccines, and up to another US$90 million to help roll out the vaccines and rebuild the health systems in Ebola-affected countries. These commitments depend on the World Health Organization recommending a vaccine for use. “I think it’s hugely significant,” says Ballou. “It’s extremely encouraging to these countries to know if one of these vaccines works, there will be a mechanism to have them pre-ordered, stockpiled and made available."