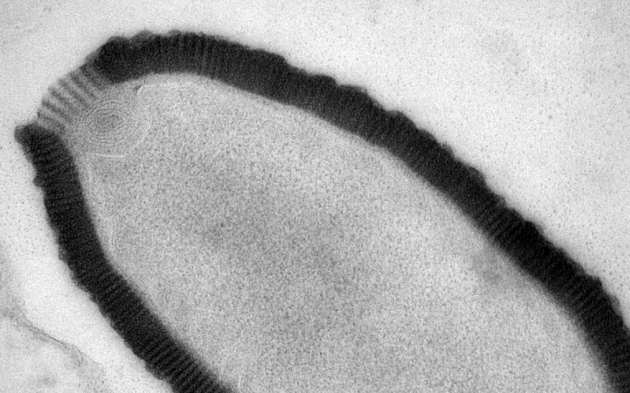 Larger than some bacteria, this virus — seen in a cross-section under a transmission electron microscope — was still able to infect amoebae despite having spent 30 millennia in a frozen state.

In what seems like a plot straight out of a low-budget science-fiction film, scientists have revived a giant virus that was buried in Siberian ice for 30,000 years — and it is still infectious. Its targets, fortunately, are amoebae, but the researchers suggest that as Earth's ice melts, this could trigger the return of other ancient viruses, with potential risks for human health.

“This guy is 150 times less compacted than any bacteriophage. We don’t understand anything anymore!”

The newly thawed virus is the biggest one ever found. At 1.5 micrometres long, it is comparable in size to a small bacterium. Evolutionary biologists Jean-Michel Claverie and Chantal Abergel, the husband-and-wife team at Aix-Marseille University in France who led the work, named it Pithovirus sibericum, inspired by the Greek word 'pithos' for the large container used by the ancient Greeks to store wine and food. “We’re French, so we had to put wine in the story,” says Claverie. The results are published in Proceedings of the National Academy of Sciences1.

Claverie and Abergel have helped to discover other so-called giant viruses — including the first, called Mimivirus, in 20032, and two others, known as Pandoraviruses, last year3 (see 'Giant viruses open Pandora's box'). “Once again, this group has opened our eyes to the enormous diversity that exists in giant viruses,” says Curtis Suttle, a virologist at the University of British Columbia in Vancouver, Canada, who was not involved in the work.

Two years ago, Claverie and Abergel's team learned that scientists in Russia had resurrected an ancient plant from fruits buried in 30,000-year-old Siberian permafrost4. “If it was possible to revive a plant, I wondered if it was possible to revive a virus,” says Claverie. Using permafrost samples provided by the Russian team, they fished for giant viruses by using amoebae — the typical targets of these pathogens — as bait. The amoebae started dying, and the team found giant-virus particles inside them.

Under a microscope, Pithovirus appears as a thick-walled oval with an opening at one end, much like the Pandoraviruses. But despite their similar shapes, Abergel notes that “they are totally different viruses”. 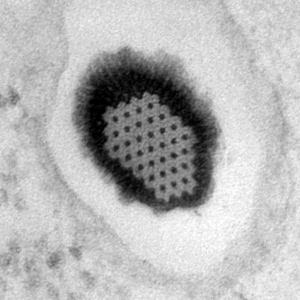 The 'cork' at one end of the virus's capsid.

Pithovirus has a ‘cork’ with a honeycomb structure capping its opening (see electron-microscope image). It copies itself by building replication ‘factories’ in its host’s cytoplasm, rather than by taking over the nucleus, as most viruses do. Only one-third of its proteins bear any similarity to those of other viruses. And, to the team’s surprise, its genome is much smaller than those of the Pandoraviruses, despite its larger size.

“That huge particle is basically empty,” says Claverie. “We thought it was a property of viruses that they pack DNA extremely tightly into the smallest particle possible, but this guy is 150 times less compacted than any bacteriophage [viruses that infect bacteria]. We don’t understand anything anymore!”

Although giant viruses almost always target amoebae, Christelle Desnues, a virologist at the French National Centre for Scientific Research in Marseilles, last year discovered5 signs that another giant virus, Marseillevirus, had infected an 11-month-old boy. He had been hospitalized with inflamed lymph nodes, and Desnues's team discovered traces of Marseillevirus DNA in his blood, and the virus itself in the a node. “It is clear that giant viruses cannot be seen as stand-alone freaks of nature,” she says. “They constitute an integral part of the virosphere with implications in diversity, evolution and even human health.”

Claverie and Abergel are concerned that rising global temperatures, along with mining and drilling operations in the Arctic, could thaw out many more ancient viruses that are still infectious and that could conceivably pose a threat to human health.

But Suttle points out that people already inhale thousands of viruses every day, and swallow billions whenever they swim in the sea. The idea that melting ice would release harmful viruses, and that those viruses would circulate extensively enough to affect human health, “stretches scientific rationality to the breaking point”, he says. “I would be much more concerned about the hundreds of millions of people who will be displaced by rising sea levels.”