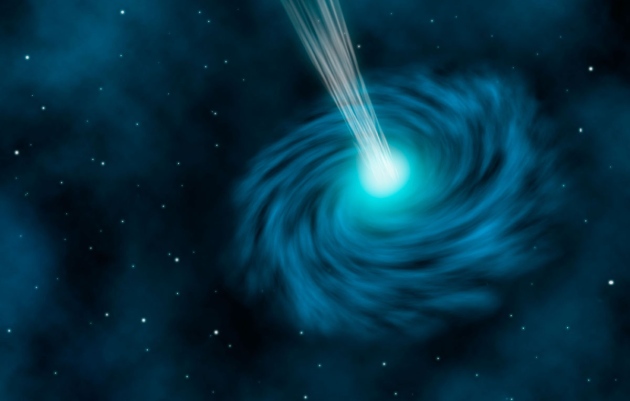 Distant quasars at opposite ends of the sky belong to regions of the observable Universe that have not been in contact since the first instants after the Big Bang — so that the quantum states of their light would be essentially unrelated.

Do you ever feel like the Universe is plotting against you? Strange as it may sound, physicists are planning to test whether a cosmic conspiracy could lie behind one of the weirdest phenomena in quantum physics, in which particles appear to influence each other, no matter how far they are separated. The experiment, proposed in a paper due to be published in Physical Review Letters1, would use light from distant quasars to verify that this 'entanglement' is real. The test could also help cosmologists to distinguish between rival models of the early Universe.

Entanglement is a peculiarly quantum effect that links the states of separate objects, such as elementary particles, so that when one of the states is measured the properties of its twin are immediately affected. The notion that the particles influence each other faster than the speed of light famously galled Einstein, who argued instead that there could be some 'hidden variables' that influence the particles' behaviour in experiments, in line with classical physics.

Entanglement has been demonstrated in countless experiments starting in the 1970s, but a loophole could still invalidate the conclusion that the quantum explanation is correct: if hidden variables exist, then it is possible that they could influence the testing apparatus to give the illusion that correlations are more common than they are. This would require the history of the Universe to be pre-ordained to give scientists the illusion that they have complete freedom in how they set up their measurement, whereas in fact they do not.

In 2010, quantum physicist Anton Zeilinger of the University of Vienna and colleagues carried out a test that ruled out the possibility that hidden variables created during the experiment could have conspired with the detection apparatus2. “But that left open the possibility that a conspiracy was set up further back in time, even just a few milliseconds before the experiment began,” says Andrew Friedman, a cosmologist at the Massachusetts Institute of Technology in Cambridge and a coauthor of the current paper.

To minimize the risk of a conspiracy, both Zeilinger’s and Friedman’s teams are looking to the skies — in particular at light coming from energetic cosmic objects known as quasars. The plan is to set up a standard entanglement test in the laboratory. While it is running, the researchers will also measure light coming from two quasars on opposite sides of the sky. On the basis of, for instance, whether the light from the first quasar hits their telescope at an even or an odd nanosecond, they would then make a decision about which two properties of their first entangled particle to observe. They would similarly decide what measurements to make on the second entangled particle, on the basis of the arrival time of the light from the second quasar.

Quasars far enough apart would have formed in regions that have never been able to influence each other since the first fractions of a second after the Big Bang, some 13.8 billion years ago. If the results once again favour the quantum interpretation, the experiment would push the point in time at which any hidden-variable conspiracy could have occurred “far further back than it ever has been before”, says Zeilinger: to the beginning of the Universe itself.

Not everyone is convinced by the strategy, however. “It’s a cool idea to use light that originated a long time ago, in a galaxy far, far way, to make choices in your experiment,” says Richard Gill, who studies quantum statistics at the University of Leiden, the Netherlands. “The trouble is, they must detect this light signal using apparatus on the ground, so there’s still the opportunity for a conspiracy to arise in those detectors today.”

Friedman acknowledges Gill’s concern and says that it is up to them to minimize this possibility. Meanwhile, Zeilinger’s group is setting up the cosmic conspiracy test using telescopes in the Canary Islands, and the two teams hope to now collaborate.

As far as the outcome goes, Zeilinger is placing his bets on quantum weirdness: “I do not think we will see anything unexpected,” he says. Friedman agrees, but he adds, “You never know what you will see. Maybe quantum mechanics is wrong.”

If classical physics does prevail, Friedman notes, this could open the door to testing rivals models for the Universe’s history. The point at which the quantum correlations break down in the lab could be related to the duration of the period of exponential expansion thought to have occurred in the first instants of the Big Bang, known as cosmic inflation, says Friedman. “This quantum lab experiment could one day be used as a test of cosmology,” he says.