The discovery of yet another period of interbreeding between early humans and Neanderthals is adding to the growing sense that sexual encounters among different ancient human species were commonplace throughout their history.

“As more early modern humans and archaic humans are found and sequenced, we’re going to see many more instances of interbreeding,” says Sergi Castellano, a population geneticist at the Max Planck Institute for Evolutionary Anthropology in Leipzig, Germany. His team discovered the latest example, which they believe occurred around 100,000 years ago, by analysing traces of Homo sapiens DNA in a Neanderthal genome extracted from a toe bone found in a cave in Siberia.

“There is this joke in the population genetics community — there’s always one more interbreeding event," Castellano says. So before researchers discover the next one, here’s a rundown of the interbreeding episodes that they have already deduced from studies of ancient DNA. 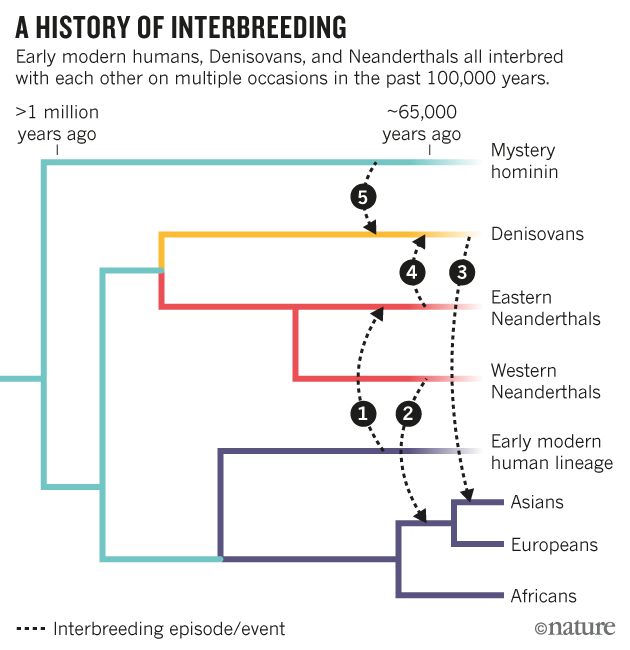 The latest discovery has emerged from a re-analysis of the genome of a female Neanderthal. Her genome sequence — which is much more accurate and complete than those obtained from other Neanderthal samples — contains stretches of Homo sapiens DNA, owing to encounters that may have happened in the Middle East.

Reporting their work in Nature1, Castellano and his team propose that around 100,000 years ago, her ancestors — a small population of Neanderthals migrating from Europe to Asia — encountered a very early wave of Homo sapiens leaving Africa. The identity of these early modern humans is a mystery. But roughly 100,000-year-old remains of Homo sapiens have been found in the Skhul and Qafzeh caves in Israel, and similarly ancient human teeth have been found in a cave in southern China. Either set of remains could represent the humans who made an early trek out of Africa; it is not clear whether this population has living descendants today. 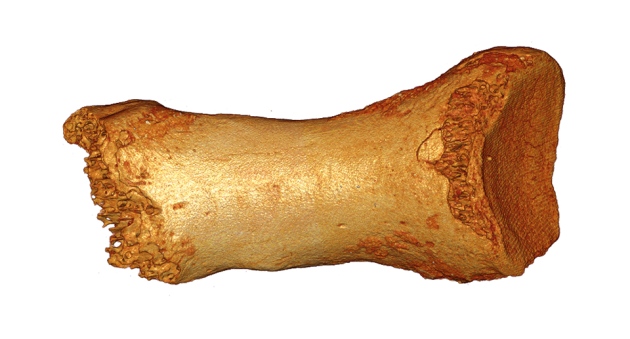 DNA from from this Neanderthal toe-bone has revealed evidence of interbreeding.

The first conclusive evidence that humans and Neanderthals mated came from analysing a draft Neanderthal genome, which was gleaned largely from remains found in Croatia. As a result of these encounters, humans from outside Africa carry traces of Neanderthal DNA — about 1–2% of their genomes. The two populations may have met in the Middle East 50,000 to 60,000 years ago, as humans leaving Africa encountered resident Neanderthals.

Early European may have had Neanderthal great-great-grandparent

They may have also interbred more recently in Eastern Europe: DNA from a 40,000-year-old human skeleton from Romania suggests the individual may have had a Neanderthal great-great grandparent. Meanwhile, some researchers contend that the ancestors of East Asians had a second Neanderthal affair, leaving them with slightly more Neanderthal heritage than Europeans have.

Neanderthals weren’t the only ancient group to interbreed with humans. Denisovans, a group discovered from remains in a cave near southern Siberia’s Altai Mountains, may have once lived all across Asia, giving them ample opportunity to interbreed with humans there. People from Papua New Guinea and elsewhere in Oceania carry fragments of Denisovan DNA, as do East Asians. Some of these sequences have proved helpful to humans: gene variants that help Tibetans to cope with altitude may have been inherited from Denisovans.

Neanderthals and Denisovans — both of which lived in Denisova Cave at various points — also interbred, probably in Asia more than 50,000 years ago. Scientists know little about this encounter, but it may have endowed Denisovans with immune-system genes from Neanderthals.

5. Denisovans and a 'ghost' population of hominins

The most mysterious interbreeding episode of all involves Denisovans and a ghost population of hominins that may have left Africa some million years ago. The mystery species could be an Asian offshoot of Homo erectus, which lived in Indonesia, perhaps as recently as 100,000 years ago, or possibly even relatives of Homo floresiensis, the 'hobbit' species discovered more than a decade ago on an Indonesian island.

“We’re looking at a Lord of the Rings-type world — that there were many hominid populations,” one evolutionary geneticist told Nature when the findings were presented at a conference in 2013.