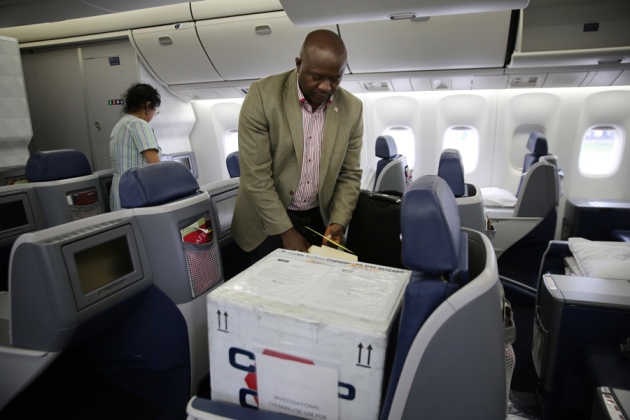 A box of the experimental Ebola treatment ZMapp heads for Liberia.

With clinical trials of experimental Ebola treatments set to begin in December, public-health officials face a major ethical quandary: should some participants be placed in a control group that receives only standard symptomatic treatment, despite a mortality rate of around 70% for Ebola in West Africa?

Two groups planning trials in Guinea and Liberia are diverging on this point, and key decisions for both are likely to come this week. US researchers meet on 11 November at the National Institutes of Health (NIH) in Bethesda, Maryland, to discuss US-government sponsored trials. A separate group is gathering at the World Health Organization (WHO) in Geneva, Switzerland, on 11 and 12 November to confer on both the US effort and trials organized by the WHO with help from African and European researchers and funded by the Wellcome Trust and the European Union.

Experts convened by the WHO in August gave ethics approval to test experimental treatments amid the Ebola epidemic in West Africa. But the WHO trial organizers are not including control arms because most African patients treated with ‘standard of care’ — which includes fluid-replacement therapy, pain relief and drugs to ward off secondary infections — die. A trial in Guinea of ‘convalescent serum’, a blood product thought to include protective antibodies, will only assign a patient to a control group if there is no available serum matched to that person’s blood type.

“These trials will be conducted in a context of fear, distrust, a lack of effective care options, the admission of multiple family members to the same centre, and sometimes violence against health-care workers,” says Peter Horby, an epidemiologist at the University of Oxford, UK. “Scientific arguments cannot tell us what will work in these conditions.”

Organizers of the US-government-led trial disagree that every patient should receive experimental treatment, arguing that it will not necessarily be better than standard care. “The idea that there’s no need for randomized, controlled trials presupposes that the drugs have zero side effects, that they are efficacious, and that there’s no substantial variability from patient to patient,” says Clifford Lane, deputy director for clinical research and special projects at the US National Institute of Allergy and Infectious Diseases in Bethesda, Maryland. “I don’t think any of that is true.”

Several experimental interventions, including convalescent serum and the antibody cocktail ZMapp, have been given to patients in the United States, but they have been used at different stages of the disease. As a result, it is not clear whether the treatments improved patients’ outcomes.

That is one motivation for the upcoming US trial, which will be run among three treatment centres that have cared for people with Ebola: the NIH Clinical Center, Emory University in Atlanta, Georgia, and the University of Nebraska Medical Center in Omaha. “The idea is to talk about whether we might do this in a more systematic way at these three units,” Lane says. The NIH is in discussions with Liberian officials that may lead to a similar clinical trial there.

Both the US and WHO trials will use ‘adaptive’ designs that aim to determine quickly whether an intervention is effective. The US effort will probably employ a ‘master protocol’ to compare various treatments against a standard-of-care arm, says Edward Cox, director of the antimicrobial products division of the US Food and Drug Administration’s Center for Drug Evaluation and Research in Silver Spring, Maryland.

Officials at the two meetings this week will make decisions about which interventions to test on the basis of the limited evidence about potential benefits and side effects, drug availability, and ease of administration in West Africa. Some groups have moved ahead with trials of medications approved for other purposes; the non-profit medical-aid organization EMERGENCY, based in Milan, Italy, is planning to test the cardiac drug amiodarone at an Ebola treatment centre outside Freetown in Sierra Leone.

The choices about which drugs to test have been made more urgent by recent news that the Ebola epidemic may be waning in some regions, especially in Liberia. “There are going to be a limited number of places where you can actually do trials,” says Ripley Ballou, the head of Ebola vaccine research at GlaxoSmithKline’s vaccine division in Rixensart, Belgium. “It’s conceivable that there could be a backlog.”

But Piero Olliaro, head of intervention and implementation research on neglected tropical diseases at the WHO, does not think that this will pose a problem. Because Ebola is so deadly, he says, a treatment’s efficacy can be determined by testing it on as few as 100–150 people. “Patients are dying every day that we spend debating these issues,” he says. “We all share already the responsibility of not having answered these questions before the epidemic, so that we could have started studies right from the beginning.”