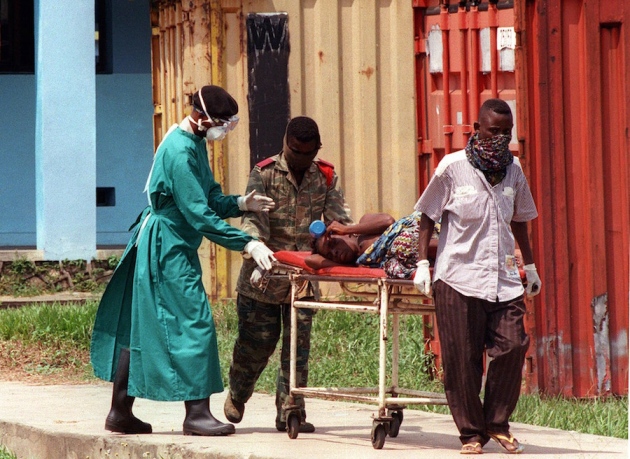 A survivor of the 1995 Ebola outbreak in the Democratic Republic of Congo produced a powerful Ebola antibody.

The blood of a man who survived an Ebola outbreak nearly 20 years ago is helping scientists to develop a treatment against the disease.

The survivor produced some of the strongest protective proteins, or antibodies, against Ebola found so far, researchers report in two papers published today in the journal Science1, 2. One of these antibodies, dubbed mAb114, is capable of saving monkeys infected with Ebola.

“It’s really stunning that a single antibody can protect against Ebola,” says Nancy Sullivan, a viral immunologist at the US National Institute of Allergy and Infectious Diseases in Bethesda, Maryland, who led the research identifying the antibody.

The antibody donor, identified only as “subject 1”, became severely ill with Ebola in 1995, during an outbreak of the virus in Kikwit, Democratic Republic of the Congo. After weeks battling the disease, subject 1 recovered and went back to the Ebola wards to help care for other patients.

Eleven years later, scientists drew his blood and isolated the mAb114 antibody. In subsequent tests, the purified antibody saved the lives in of six infected monkeys. Some of the animals recovered despite not receiving treatment until five days after infection. Only one other potential Ebola treatment has proved as powerful in animal studies: the antibody cocktail known as ZMapp.

ZMapp and other similar drugs have been given to more than 80 patients during the Ebola outbreak. On 23 February, researchers reported the results of a clinical trial involving 71 of those patients. Thirty-six people were given ZMapp and 78% of them survived, compared with 63% of patients who did not receive the drug.

But that result is not statistically significant. And Mapp Biopharmaceutical of San Diego, California, which developed ZMapp, was forced to end the clinical trial in January without achieving its goal of enrolling 200 patients because of the waning of the Ebola outbreak.

It is not clear whether the new antibody could overcome some of the drawbacks to treating patients with ZMapp. For instance, patients must be infused with relatively large amounts of the drug, and researchers suspect that this may be one reason why so many of those treated develop side effects. Six of 13 patients evacuated from West Africa and treated with ZMapp or closely related drugs in the current Ebola outbreak, for instance, developed side effects including fever, rashes and welts, rapid heart rate and low blood pressure3.

The National Institutes of Allergy and Infectious Disease, which ran the ZMapp clinical trial with the Liberian ministry of health, said that 25% of patients experienced side effects to the first infusion of the drug, mostly fevers, but that side effects tapered off with each subsequent dose; 10% of patients had side effects after the third infusion.

“The fact that you have to pump people full of antibody for it to work is one of the biggest problems with these therapies,” says infectious-disease researcher Kristian Andersen at the Scripps Research Institute in La Jolla, California. “That’s going to be a very important question to address.”

One of the studies1 released today tested mAb114 at similar doses to ZMapp, but Sullivan says that further work will explore whether lower doses are effective.

From examining the structure of mAb114, Sullivan and her colleagues conclude that its potency probably arises from its ability to stop the Ebola virus from hijacking the body’s immune defences2.

Ebola docks to receptor proteins inside cells, which allows the virus to reproduce itself. Ebola hides the protein that it uses to bind to these receptors — revealing it only after gaining access to the cell's deep interior, where the receptor is found. Normally, this prevents antibodies that bind to Ebola outside cells from stopping the virus from reproducing.

But Sullivan and her colleagues found that mAb114 binds to Ebola viruses, follows them into cells, and blocks the viruses from releasing their deadly payload inside the cell.

Sullivan says that her team now plans further work to test whether mAb114 is safe in humans. She says that even though ZMapp looks promising, researchers would prefer to have several possible candidate drugs to choose from in case, for instance, some work better than others or are easier to make.

“It’s sensible to not put all your eggs in one basket,” Sullivan says.