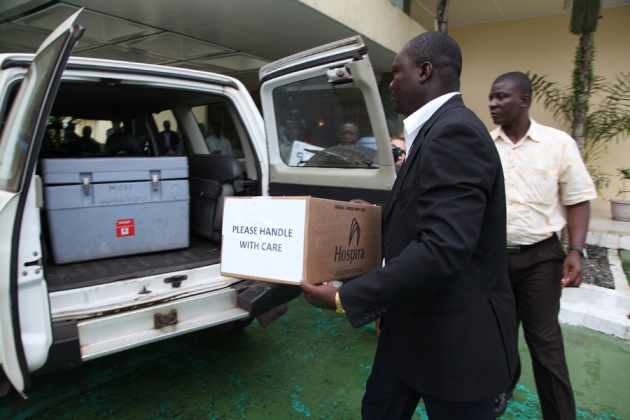 Officials secured some of the few doses of the drug ZMapp to treat three Ebola patients there.

ZMapp, the drug that has been used to treat seven patients during the current Ebola epidemic in West Africa, can completely protect monkeys against the virus, research has found1.

The study, published online today in Nature, comes the day after the World Health Organization (WHO) warned that the Ebola outbreak, which has killed more than 1,500 people, is worsening and could infect 20,000 people before it ends. A fifth West African nation, Senegal, reported its first case of the disease on Friday.

Public-health experts say that proven measures, such as the deployment of greater numbers of health-care workers to stricken areas, should be the focus of the response. But ZMapp, made by Mapp Pharmaceutical in San Diego, California, is one of several unapproved products that the WHO has said could be used in the outbreak.

The drug — a cocktail of three purified immune proteins, or monoclonal antibodies, that target the Ebola virus — has been given to seven people: two US and three African health-care workers, a British nurse and a Spanish priest. The priest and a Liberian health-care worker who got the drug have since died. There is no way to tell whether ZMapp has been effective in the patients who survived, because they received the drug at different times during the course of their disease and received various levels of medical care.

In the study, designed and conducted in part by Mapp Pharmaceutical scientists, 18 monkeys were given three doses of the drug starting three, four or five days after they were infected with Ebola. All animals that received the drug lived, no matter when their treatment started; three monkeys that were not treated died.

The findings make ZMapp the first drug shown to be highly effective against Ebola when given to monkeys that are already showing symptoms of infection, such as fever and abnormalities in proteins that aid blood clotting. That is important because unless a patient is known to have been exposed to the virus, symptoms such as fever are the first sign that he or she is infected and needs treatment.

Thomas Geisbert, a virologist at the University of Texas Medical Branch at Galveston, estimates that day 5 of infection in the monkeys studied is roughly equivalent to days 7 to 9 of a human infection. People can develop symptoms up to 21 days after they contract Ebola, although signs commonly develop between 8 and 10 days after infection.

The study authors say that ZMapp works in an “advanced” stage of the disease. The drug was able to save one monkey that had bleeding under the skin affecting more than 70% of its body, and other monkeys that had enough virus in their blood to cause severe symptoms in people, says study co-author Gary Kobinger, an infectious-disease researcher at the Public Health Agency of Canada in Winnipeg.

“In humans, the large majority are unable to walk or even sit with this level, and most will die within 24 hours,” Kobinger says.

But other researchers say that the findings should be interpreted with caution, because monkeys with Ebola are not a perfect analogue for humans with the disease. “I don’t think the data support that this drug is effective, even in the animal model, in individuals with advanced Ebola disease,” says infectious-disease physician Charles Chiu at the University of California, San Francisco.

Knowing when to give the drug may help guide its use in future outbreaks. But for now, Mapp says that no more ZMapp is available and will not be for months.