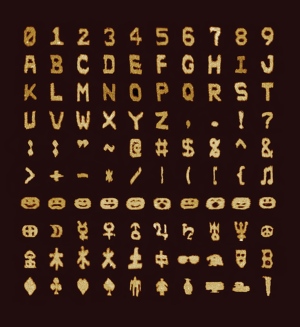 Numbers, letters and symbols are some of the 100 or so self-assembled DNA shapes designed by Harvard scientists.

Scientists have developed a way to carve shapes from DNA canvases, including all the letters of the Roman alphabet, emoticons and an eagle’s head.

Bryan Wei, a postdoctoral scholar at Harvard Medical School in Boston, Massachusetts, and his colleagues make these shapes out of single strands of DNA just 42 letters long. Each strand is unique, and folds to form a rectangular tile. When mixed, neighbouring tiles stick to each other in a brick-wall pattern, and shorter boundary tiles lock the edges in place.

In their simplest configuration, the tiles produce a solid 64-by-103-nanometre rectangle, but Wei and his team can create more complex shapes by leaving out specific tiles. Using this strategy, they created 107 two-dimensional shapes, including letters, numbers, Chinese characters, geometric shapes and symbols. They also produced tubes and rectangles of different sizes, including one consisting of more than 1,000 tiles. Their work is published today in Nature1.

Wei’s work revitalizes a technique used by Ned Seeman a chemist at New York University and pioneer in the field of DNA nanotechnology. As early as 1991, Seeman moulded short strands of DNA into cubes, tubes and lattices. It was laborious work and limited to small and simple designs2.

In 2006, Paul Rothemund from the California Institute of Technology in Pasadena created bigger structures using a technique called DNA origami. He folded a 7,000-letter strand of DNA — from the genome of the M13 virus — into the right shape, and used around 200 smaller ‘staple’ strands to hold it in place3.

Since then, long scaffolds have featured in all such work. Wei and his colleagues depart from this tradition. They show that small strands can be combined into large structures without the need for a scaffold, and with acceptable yields (the proportion of strands that assemble into shapes) of 12–17%.

Small is no limitation

This approach “clashes with the traditional thinking about tile-based assembly”, says Kurt Gothelf, director of the Centre for DNA Nanotechnology at Aarhus University in Denmark. Many scientists assumed that small strands would need to be mixed in very precise ratios to avoid making fused or half-finished structures. “It has long been assumed that this sets a limit for the size of structures that can efficiently be assembled in this way,” he says.

Peng Yin, also from Harvard Medical School and leader of the study, thinks that the technique works because the strands are slow to assemble, but grow quickly once they start. This means that the shapes have a low probability of touching one another and fusing incorrectly as they begin to take shape.

Rothemund’s origami method requires a new set of staple strands for every design. But the tile technique is more versatile. Millions of shapes can be crafted from the same set of tiles simply by leaving some out. “Once you have a pre-synthesized library, you don’t need any new DNA designs,” says Yin. “You just pick your molecules.”

The team designed a robot to pick the tiles. The desired shape is drawn using a graphical interface, and the robot picks out and mixes the required strands. It can produce 48 shapes in as many hours.

Yin says that “any technological applications are highly speculative”. But he thinks he could create DNA tiles using L-DNA, a mirror-image form of the classic double helix that is not found in nature. Such structures might be useful for designing nano-scale devices for delivering drugs, especially because they would be less likely to be broken down by DNA-cutting enzymes or trigger an immune reaction.

In an accompanying News & Views article4, Rothemund and Ebbe Andersen, also from the Centre for DNA Nanotechnology, say that “Wei and colleagues’ findings remind us that we are still just apprentice DNA carpenters, and will embolden others to mix hundreds of DNA strands together against prevailing wisdom. The results will probably surprise us.”