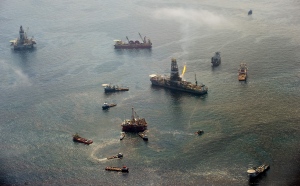 Scientists say large amounts of oil from the 2010 Deepwater Horizon spill may have ended up on the sea floor.

Missing oil from the Deepwater Horizon spill may have ended up at the bottom of the Gulf of Mexico.

The Deepwater Horizon spill in 2010 spewed more than 600 million litres of oil into the Gulf of Mexico. While microbes processed the vast majority within months, US government assessments failed to account for the fate of about one-quarter of the spilled oil.

Some scientists attending the Gulf of Mexico Oil Spill and Ecosystem Science Conference in New Orleans, Louisiana this week are now saying that as much as one-third of the oil may have been mixed with deep ocean sediments through a phenomenon dubbed the dirthy bathtub, and dragged to the bottom by another process called the dirty blizzard. The oily sediments risk causing significant damage to ecosystems, they say, and might even affect commercial fisheries in the future.

Rebekka Larson, a sedimentary geologist at Eckerd College in St Petersberg, Florida, presented data showing that at many sites, plankton and other surface material were raining down at least ten times faster than normal, often leaving a telltale darker layer on the sea floor. Jeff Chanton, a geochemist at Florida State University in Tallahassee, thinks that the oil acted as a catalyst for particles to clump together and fall to the bottom on a massive scale, creating a ‘dirty blizzard’. This fit with reports from researchers that during the spill, layers of water that would normally be cloudy with suspended plankton instead appeared totally transparent — except for strings of aggregated particles falling to the bottom. “There’s something about that oil that just sucks everything out of the surface,” says Chanton.

Uta Passow, a biological oceanographer at the University of California, Santa Barbara, offered hints about what that something might be. She presented lab experiments showing that weathered oil collected from the Deepwater Horizon site causes particles to clump together, whereas fresh oils do not. Passow's lab is now exploring whether the effect is due to chemical transformation of the oil on its path to the surface or some bacterial effect.

The dirty blizzard may have gotten dirtier as it rained down. Researchers at the University of South Florida College of Marine Science in St Petersburg, led by chemical oceanographer David Hollander, described a 'dirty bathtub' effect in which diffuse oil, suspended in a water layer at depths of more than 1,000 metres, contaminated sediments as deep currents moved it around the Gulf. Hollander said this week that, taken together, the dirty bathtub and dirty blizzard may have sent up to 30% of the spilled oil to the bottom of the Gulf of Mexico. “We can debate about how to delineate it, but the material is there,” he says.

Donald Boesch, president of the University of Maryland’s Center for Environmental Science in Cambridge and a member of a commission assembled by the US government to investigate the spill, is not convinced by this figure. “I find it hard to believe,” he says, noting that oil concentrations measured in most sediments have been small. But Hollander says that the spill affected such a wide area that small concentrations might add up to huge amounts of oil.

Sediment contamination could be troublesome for commercially fished species such as tilefish, which live in deep waters and not only eat worms and other animals found in the sediment, but also burrow into the sediment, mixing it up, says Steve Murawski, a University of South Florida fisheries biologist who collaborates with Hollander. Tracey Sutton, an ichthyologist at the Virginia Institute of Marine Science in Gloucester Point, says that the ecological effects could get worse with time. ”The long-term effects, we’re not going to see yet.”