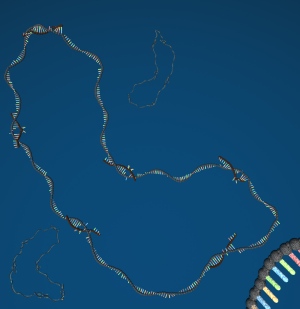 Circular non-coding RNA has been found to bind and deactivate microRNAs.

At least some of the loops, described in two papers published this week by Nature1, 2, act as molecular ‘sponges’, binding to and blocking tiny gene modulators called microRNAs. But the researchers suspect that the circular RNAs have many other functions. The molecules comprise “a hidden, parallel universe” of unexplored RNAs, says Nikolaus Rajewsky, the lead author of one of the studies and a systems biologist at the Max Delbrück Center for Molecular Medicine in Berlin.

The discovery is yet another a reminder that RNA is much more than a mundane messenger ­between DNA and the proteins it encodes. The past two decades have seen the discovery of a host of nonconformist RNAs. Some were unexpectedly short or surprisingly long, and some flouted orthodoxy by blocking other RNA strands from being translated into protein. But almost all were linear. The few accounts of circular RNAs in plants and animals were generally dismissed as genetic accidents or experimental artefacts, says Erik Sontheimer, a molecular biologist at Northwestern University in Evanston, Illinois.

Instead, the predominance of linear RNAs may have been the artefact. Typical RNA-sequencing methods isolate only those mol­ecules with characteristic molecular ‘tails’. With their ends joined together, round RNAs lack those tails, so have generally been overlooked.

But advances in sequencing have allowed biologists to accumulate large data sets of RNA sequences, including some from RNA without tails. Last year, Julia Salzman, a molecular biologist at Stanford University School of Medicine in California, and her colleagues sent the first missive from the circular universe. They reported finding a plethora of circular human RNAs while searching for RNA molecules that conventional methods might have missed3. And when Rajewsky and his colleagues mined databases for circular RNA molecules, they found thousands in nematode worms, mice and humans.

“It’s yet another terrific example of an important RNA that has flown under the radar,” says Sontheimer. “You just wonder when these surprises are going to stop.”

“You just wonder when these surprises are going to stop.”

Rajewsky and his colleagues, and a second, independent team2 led by Thomas Hansen and Jørgen Kjems of Aarhus University in Denmark, focused on a circular behemoth, some 1,500 nucleotides around, that is expressed in the brains of mice and humans. They found that it contains about 70 binding sites for a microRNA called miR-7. MicroRNAs are short fragments of RNA that can block gene expression by binding to and preventing the translation of messenger RNAs. MiR-7 targets have been linked to cancer and Parkinson’s disease.

Circular RNAs could also be sponges for microRNA from outside the cell, notes Rajewsky. Some have possible binding sites for viral microRNAs, which can subvert immune responses. Rajewsky hypothesizes that circular RNA could even interact with RNA-binding proteins. Salzman agrees. “They are so abundant, there are probably a multitude of functional roles,” she says.

So what other shapes might RNAs take? “I can’t think of another form we might have missed,” laughs Phillip Sharp, a molecular biologist at the Massachusetts Institute of Technology in Cambridge. “But you know somebody will find one.”