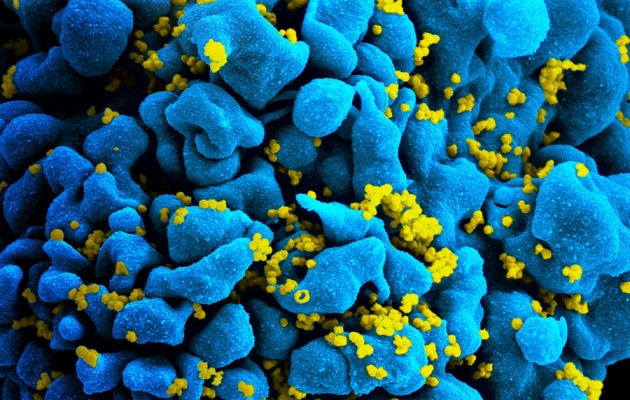 Treating HIV with an antibody can reduce the levels of the virus in people's bodies — at least temporarily, scientists report on 8 April in Nature1.

The approach, called passive immunization, involves infusing antibodies into a person's blood. Several trials are under way in humans, and researchers hope that the approach could help to prevent, treat or even cure HIV. The work is a milestone towards those goals, says Anthony Fauci, director of the US National Institute of Allergy and Infectious Diseases in Bethesda, Maryland. “This is an early study, but it’s a study with some impressive results,” he says.

Researchers tested four different doses of an HIV antibody called 3BNC117 in 29 people in the United States and Germany. Seventeen of the participants had HIV, and 15 of those were not taking antiretroviral (ARV) drugs at the time of the study. One infusion of the highest dose of antibody, given to 8 participants, cut the amount of virus in their blood by between 8 and 250 times for 28 days.

But much work remains to determine whether the approach can produce longer-lasting effects and whether it is practical for clinical use.

Previous studies have shown that passive immunization can reduce levels of HIV in the blood of monkeys and mice, although the approach has not worked as well in humans2. But the antibodies used in those earlier clinical tests were of an older generation that could not neutralize many different strains of HIV. Researchers have spent much of the past decade trying to find 'broadly neutralizing' antibodies that are more widely effective against the virus, and the 3BNC117 antibody belongs to this class.

The price of treatment with this approach is also a concern. Antibodies can cost thousands of dollars for each course of treatment, and the majority of people with HIV are in low- and middle-income countries, some of which are already fighting drug companies over the high cost of antibody medicines. “The practicality, utility and efficacy of this approach are hugely open questions,” says Mitchell Warren, executive director of AVAC, a global organization that advocates HIV prevention and is headquartered in New York City.

Even with improved antibodies, researchers still face a vexing problem: HIV mutates quickly as it replicates in the human body, which can reduce the effectiveness of treatments over time. The study's authors found that this was true for the single antibody that they tested. In two people who received the highest dose of 3BNC117, the antibody became roughly 80% less effective at neutralizing HIV after 28 days of treatment — probably because the virus changed shape to evade the antibody.

As a result, it is unlikely that a single antibody alone could treat people who have HIV, says the study's lead author, Michel Nussenzweig, an infectious-disease physician and immunologist at the Rockefeller University in New York. Instead, therapies would use combinations of antibodies. Nussenzweig's group has produced a second HIV antibody and hopes to test it alone and in combination with 3BNC117 this year.

“The goal is a once-a-year shot for prevention and a combination approach for cure,” he says, adding that this immunotherapy approach to treating HIV would resemble treatments now used against cancer.

Relying on combinations of antibodies would raise the costs of passive-immunization treatments for HIV. But Warren says that this is not necessarily a deal-breaker, noting that patient advocacy and concessions by drug companies have helped to reduce the high cost of ARV medications over the past two decades. “Some people would have said 10–15 years ago that ARVs were not going to be affordable, either,” he adds.