More support is needed to keep early-career investigators in a biomedical research career. 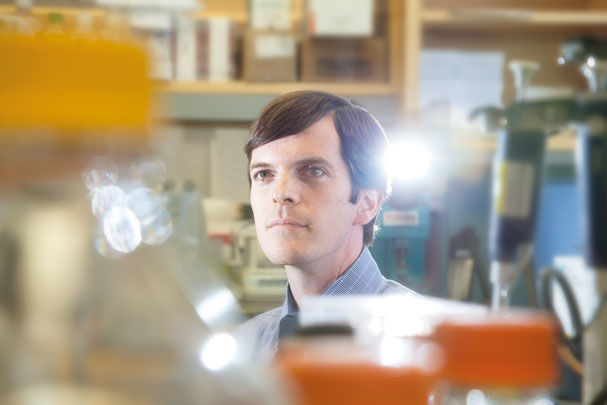 Brad Ruzicka almost gave up on his scientific ambitions, until a career development award finally set him on a path to success.

Brad Ruzicka spent 13 years training to be a psychiatrist and a physician-scientist.His plan was to spend a few days a week treating patients with schizophrenia and bipolar disorder, and the rest of his time in the lab rooting out the epigenetic causes of psychotic disorders. But, last year, after three rejected applications for research funding from the United States National Institutes of Health (NIH), Ruzicka was on the verge of quitting science.

Ruzicka is one of the thousands of early career biomedical researchers in the US vying for public research funding. Every year, another 10,000 biomedical and clinical PhDs join the ranks of postdoctoral fellows, while funding and faculty positions flatline. The 2016 NIH budget was US$32 billion, making it the largest funder of biomedical research in the country. Yet the funds were, after adjusting for inflation, below a spending peak in 2003, and under the Trump administration’s budget proposals for 2018, could be reduced by 18%. Compounding the problem, early-career researchers receive a small amount of this shrinking pool: in 2012, 7% of all NIH grant funding went to scientists aged 40 or younger, compared to 57% for those aged 41 to 60, and 28% for researchers 61 and older.

The squeeze on the NIH budget can be seen in research output from the US. Considering only articles published in six of the most prestigious clinical and basic science journals, a team from the University of Michigan, Ann Arbor, recently showed that US researchers published 955 papers, about 37% of the total, in 2015 — down from 44% in 2000.

The slump in life sciences papers can be attributed in part to the lack of funding support for early-career scientists, who are typically at the apex of their productivity and citation impact.

It’s no wonder, then, that half of all postdocs leave the bench behind — and Ruzicka was almost one of them. In what he told himself would be his final try, Ruzicka applied for a fourth time for the K08 career development award, a mentored grant that provides salary support and modest research funding for early-career physician-scientists. It came back with a near-perfect score.

“They say it’s sink or swim,” says Ruzicka, who works at McLean Hospital, an affiliate of Harvard Medical School in Massachusetts, “and it’s like someone just threw me a life preserver.”

According to Bruce Alberts, a biochemist at the University of California, San Francisco, it’s the larger research ecosystem, not individual researchers, that needs to be saved. “We’re not taking advantage of the creativity inherent in our young people,” says Alberts, a co-founder of Rescuing Biomedical Research, a project based at Princeton University in New Jersey that aims to address systemic flaws in the US system for funding public biomedical research.There are moves to help more young scientists become independent investigators running their own well resourced laboratories — but, says Alberts, “it’s far from being sufficient.”

The following are some ways funding agencies and academic institutions are supporting the next generation of biomedical scientists — as well as initiatives experts say they should explore.

In 2008, the NIH adopted policies to increase he number of funding awards for researchers ho were less than 10 years out of graduate school or medical residency. Among other practices, the agency started assessing these early-stage investigators (ESIs) against their peers and giving them a ‘handicap’ on the score required for funding.

Ten years on, “it’s clear that the ESI programme is working,” says Michael Levitt, a Nobel Prize-winning biophysicist at Stanford University in California. Levitt and his brother, Jonathan Levitt, an information scientist who studies the research enterprise at the University of Wolverhampton in the UK, recently calculated the age of NIH grantees. They found that since 2010, funding success rates for researchers under 45 have risen above the 35-year average (1980–2015). But the success rates of younger faculty, especially those under 40, still remain below those of older faculty. “There hasn’t been enough money going to young people,” Michael Levitt says.

Lawmakers in Washington DC are cognisant of the problem. In December 2016, the US Congress passed the 21st Century Cures Act, which, among other things, created an office within the NIH tasked with providing opportunities for young scientists. Initially, the agency proposed limiting the amount any single investigator could receive, the idea being that capping support to senior researchers would free up funds for those just starting up their labs.

The proposal was met with fierce resistance from the biomedical community, and eventually scrapped. According to Michael Lauer, deputy director for extramural research at the NIH, “one of the more common criticisms that we heard was, ‘since your goal here is to fund more early- and mid-career investigators, why don’t you just do that.”

The response was the Next Generation Researchers Initiative, announced in June 2017. Under this plan, the NIH will earmark US$210 million to fund research by an additional 2,000 early- or mid-career scientists. The amount will be gradually increased over five years to US$1.1 billion a year — more than 3% of its current budget. The money will come from existing budgets, so more established investigators may feel the pinch of stiffer competition for the shrunken resources left behind, but no one investigator will be faced with a cap.

However, Alberts says the problem is not just that young scientists aren’t being funded in adequate numbers but that they aren’t being encouraged to take risks and think outside the box. “It’s the tyranny of conventional thought that is ruining our system,” he says.

Alberts prefers what the NIH has done with initiatives like the New Innovator Awards programme, which each year since 2007 has handed out five-year, $1.5 million awards to dozens of promising early-career scientists to use as they please for imaginative, blue-sky research, no preliminary data required.

A recent assessment of the programme conducted by the Institute for Defense Analyses (a federal-funded policy centre) found that awardees conducted more innovative and riskier research than scientists of a similar age funded through the NIH’s flagship Research Project Grant Program, known as the R01. The initial batch of New Innovator Award winners authored fewer papers and took longer to publish, but their studies had greater influence as measured by citation counts and journal impact factors, the analysis found. New Innovators were also more successful at securing later funding through new competitive grant programmes.

Such initiatives may be just the beginning. The Rescuing Biomedical Research steering committee is preparing a report calling on the NIH to create more of these innovator grants any time the agency launches a multi-million dollar scientific initiative like the recently created Cancer Moonshot, says Alberts. The National Institute of General Medical Sciences is an established NIH institute experimenting with funding talented young people, instead of specific projects. In 2016, this organization awarded 93 early-career scientists through a new funding scheme intended to support an investigator’s entire lab with a single, unified grant, rather than on a project-by project basis.

Noah Whiteman, an evolutionary biologist from the University of California, Berkeley, was one of the first to receive a R35 Maximizing Investigators’ Research Award. “It was absolutely game-changing for me,” he says. “The R35 reviews explicitly rewarded me for being creative and not following the herd.” Whiteman hopes to use the US$232,000 per year to develop a model system for studying host– parasite interactions, which he had struggled to fund through several R01 applications.

With what little money Whiteman had cobbled together, he managed to sequence the genome of the parasite in the relationship, the herbivorous fly Scaptomyza flava, which has evolved to feed only on the living leaves of mustard plants. Whiteman and his team showed that the leaf-mining insect has lost key smell receptor genes that would attract it to yeast, a primary food source for related flies. These results were published in the Proceedings of National Academy of Sciences, USA in 2015.

Now, with the R35, Whiteman has the flexibility to pursue new research directions. “I really do feel like they’ve invested in me,” he says.

Funding agencies might also do well to look abroad for inspiration on how to support and retain early-career researchers. Molecular biologist, Julie Claycomb, moved to Canada from the US in 2010 when the University of Toronto offered her a faculty position. Toronto, like most Canadian universities, pays its professors’ salaries in full. “That’s a really big deal,” says Claycomb. US universities, by comparison, at most provide salary support for nine months of the year (excluding the summer months), and faculty members are expected to make up the rest through grants.

Sweetening the deal, Claycomb received a Canada Research Chair in 2012, a prestigious young-investigator award bequeathed by the Canadian government to universities to support salaries and research expenses during a new hire’s first five to 10 years on the job.

Without enough grant funding or faculty positions to go around, one solution is to reduce the number of researchers by paying them as ‘staff scientists’. In 2015, the National Cancer Institute announced the R50 Research Specialist Award, a pilot funding scheme designed to support salaries for staff scientists. Melissa Dix Simon was among the first recipients. After finishing her PhD five years ago at the Scripps Research Institute in California, Dix Simon stayed on in the same chemical biology lab, first as a postdoc and then as a staff scientist. The position had a low salary base, and with two children and no guarantee of continued funding since her salary was coming off her lab head’s R01 grant, Dix Simon says she started to “toy with the idea” of finding a job in industry.

With the R50, not only does she know where her pay cheque is coming from until 2021, with potential for renewal, “but it also increased my salary, making it less disparate with that of the biotech companies in the area,” Dix Simon says. “The R50 has been transformative for me.”