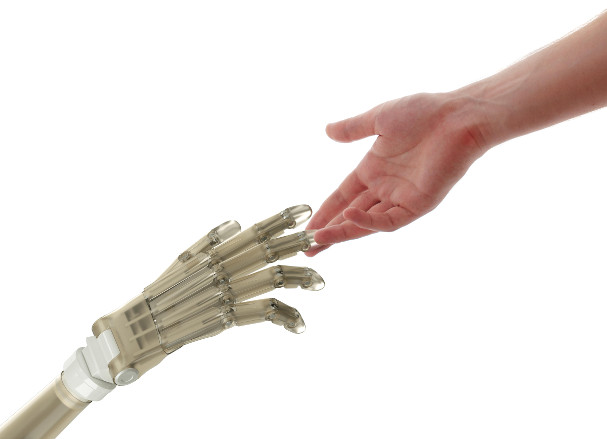 The research the company is publishing in top journals.

US tech giant, Xerox, is synonymous with photocopiers and printers, but the company’s involvement in basic science research is less well known, including a project that’s developing flexible electronics that can mimic skin.

Last October a team led by Zhenan Bao, from Stanford University, announced they had created an artificial skin with mechanical receptors that could sense changes in pressure, as felt when skin is touched, and use digital signals to communicate that message to the nervous system in mice. The findings, published in Science, are a significant step toward building prostheses for humans that are more sensitive, dexterous and responsive.

Once the artificial skin, which is made with printed organic circuits, sensed changes in pressure it could stimulate engineered mouse neurons. The team showed that the digital pulses received by the neurons matched the pressure being applied to the artificial skin. “This research is a first step towards using organic electronics for neuro-prosthetics,” says Tse Nga Ng, a Xerox collaborator, referring to devices that can replace a faulty part of the human nervous system.

While Bao's team had been working on flexible electronics, they joined forces with PARC, which has a technology that allows inkjet printers to deposit flexible circuits onto plastic, a crucial part of developing an artificial skin. “We hope we can make this sensor behave as closely to a natural skin response as possible, or even beyond the sensitivity of natural skin,” says Ng.

The work was also supported by the Xerox Foundation, which disburses about $1 million a year in grants.

Xerox has a long history in research and innovation. The company introduced the first successful photocopier using plain paper in 1959, launching a revolution in document processing that became a turning point of the information age.

The century-old company may not be a hot digital brand like Google or Apple today, but it has an impressive history of innovation in IT and beyond: Xerox researcher Gary Starkweather created the first laser printer in 1969. Xerox also developed Ethernet, the dominant form of computer networking before Wi-Fi. In 1990, it introduced DocuTech, a line of print-on-demand systems for brochures, sales reports and electronic publishing in general. “Market-making innovations such as the laser printer and DocuTech are what Xerox should get the most credit for,” says Tom Kavassalis, vice-president, strategy and alliances, Xerox Innovation Group. “It’s one thing to enter an industry that exists, but it’s another thing to create that industry.”

As well as Xerox’s renowned PARC research subsidiary in Palo Alto, California, the company also has research centres in New York State, Canada, France and India. There are about 600 scientists in those locations, but overall some 5,000 Xerox staff are involved in research, development and engineering (RD&E). The company spent more than $500 million on RD&E in 2015.

Xerox carries out research activities spanning everything from connected vehicles to virtual customer care agents that learn like humans, and mobile apps that give users personalized suggestions on how to navigate cities.

Filing patents is a priority for Xerox researchers — the company ranked 41st in the number of United States patents awarded last year — after which they share their work in forums and academic journals such as the International Journal of Computer Vision. While most of their output appears in journals that are not covered by Nature Index, it has contributed to ten articles in the past 12 months. The company ranked 31st in the list of corporations featured in the index in 2015.

Xerox is still making copiers while providing office outsourcing services. Although hardware sales have declined, it remains a Fortune 500 company with more than 143,000 workers globally and revenues of $11 billion. The company is the process of splitting into two, one company focused on document technology called Xerox and the other on business process outsourcing. “We want to stand up two strong, viable companies with the R&D functions that they will need going forward,” says Kavassalis.