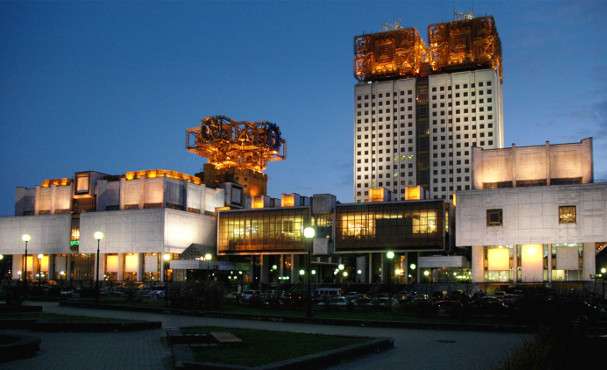 The Russian Academy of Sciences building in Moscow.

The Russian Academy of Sciences is the country's top producer of research, but its performance is slipping.

In the wake of the Russian Kremlin’s recent reform of the country’s science sector, there has been a shift in research output towards the university sector and away from the venerable Russian Academy of Sciences, the world’s oldest scientific network.

While the RAS is the country’s leading producer of high-quality research tracked by the Nature Index, its performance has slipped in recent years. As the country’s overall output increased significantly between 2012 and 2015, the contribution of RAS scientists to journal papers in the index fell slightly. Separately, Russian analysis has shown a drop in the proportion of RAS publications that make up the country’s output in leading journals over the same period.

The fall in research output has occurred during a period of enormous upheaval and uncertainty forced on the organisation by the government. Reforms have included the merging of the RAS with the Russian Academy of Medical Sciences (RAMS) and the Russian Academy of Agricultural Sciences (RAAS), and the ceding of control of its budgets, research priorities and significant property holdings to a new government agency, the Federal Agency for Scientific Organisations (FASO).

Prior to these shifts there had been little change to the organisation since the Soviet era. With a peak of 100,000 employees in the early noughties, including 45,000 scientists working in more than 400 institutes, it was a huge body funded by the government to carry out almost all basic research in Russia. But there were concerns about conflicts of interest at the top where elected fellows were in charge of distributing the research funding, including for their own projects. “The funding and the administration structure was opaque and corrupted,” says Mikhail Gelfand, professor of bioinformatics with the RAS Institute for Information Transmission Problems. Even the RAS president, Vladimir Fortov, had said the organisation needed modernising.

However, since the unheralded introduction of sweeping reform legislation to the State Duma in 2013 without any consultation, Gelfand and thousands of Russian scientists have taken to the streets to protest the manner in which changes have been introduced and the apparent lack of understanding of science behind them.

Much of the debate has centred on the productivity and relative efficiency of the RAS' research. An independent 2014 analysis, published by the French Institute of Foreign Relations, found that prior to the reforms the RAS had half the funding received by Germany’s Max Planck Society but produced less than 20% of the publications per scientist.

Author of the 2014 analysis, Irina Dezhina, says that while it is very difficult to make any precise assessment of the relative efficiency of the Russian institution compared to its foreign counterparts, the overall numbers are not encouraging.

“It [the RAS] will look very productive on the country scale, but if we compare structures that are sort of analogous, like the CNRS in France, then it is much less productive than these structures,” says Dezhina who worked within the academy for nine years. “Academics, of course, like to point out that in the country it is the strongest organisation and this is true, but is it a really productive organisation? I don’t think so.”

The most recent Nature Index figures show that when adjusted to account for the size of their contribution to research collaborations, the RAS publication output in the 68 journals included in the Nature Index fell 2% between 2012 and 2015. This is a significant reduction when the contribution from Russian researchers as a whole increased by 24% over the same period. Separate research from the Moscow-based National Higher School of Economics shows to that the proportion of publications in leading journals from Russia’s top universities has steadily increased from 11.2% in 2010 to 37.7% by October, 2015.

The boost in publications from the university sector can be credited to the Russian government’s decade-long policy to foster research in the university sector, which had previously been almost solely focused on education. This is seen as necessary to promote Russian universities in global rankings.

In an ominous comment interpreted as being directed at the academy this year, the Russian president, Vladimir Putin, told the Presidential Council on Science and Education that just 150 of the state’s education and research institutes were producing 80% of the country’s highly cited works and 70% of Russia’s patents. “At the same time, 150 make up only 10% of all the state education and research institutions. Now the question is: what about the others?” asked Putin.

In early 2015, the Ministry of Education and Science released a plan to distribute even basic funding for RAS equipment, utility payments and salaries through competitive grant allocations. Gelfand says that this hasn’t led to any significant change yet but there are suggestions it will be introduced this year. “If this happens, it will be a disaster, because the evaluation scheme has not been worked out in sufficient detail and there are reasons to suspect it will be based on formal criteria like the number of publications. The fate of good labs situated in weak institutes will be in peril.”

Gelfand and others are concerned that those institutes that are judged uncompetitive will have to close. “It’s not a risk, it will be reality,” says Dezhina. In an effort to avoid this, the RAS recently invited feedback on its own draft proposal for restructuring Russian science funding.

At last month’s General Assembly of academicians it was not made any clearer how the funding responsibilities would eventually be allocated. While many attending were still hopeful that when the reforms were completed, the academy would again have control over its own budgets and research priorities, it looks increasingly unlikely.