Early career success: Nobel Prize winners are twice as productive from the start

The benefits of teamwork. 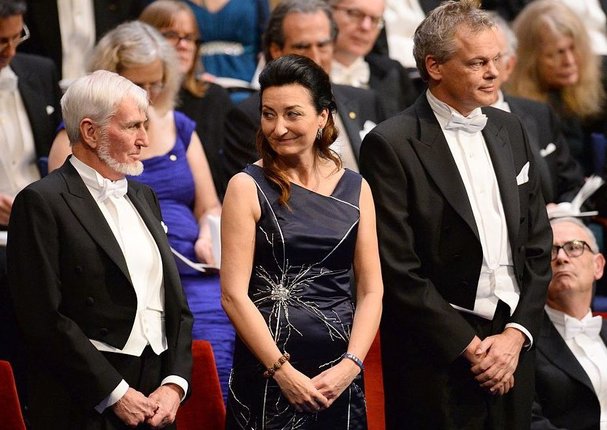 Nobel Prize winners published twice as many articles as other early-career researchers during their first 5 years as working scientists, an analysis of more than 500 laureates has found.

While laureates and other scientists both relied on collaboration to kick-start their careers, the study found that future prize-winners spent their early years working in larger teams, publishing almost double the number of joint papers, on average.

They also published 6 times more papers that ended up among the top 1% of highly-cited articles.

“In contrast to the iconic image of lone geniuses making guiding contributions, we find the giants in science in fact show a greater propensity toward teamwork,” says Dashun Wang, one of the study’s authors, from the Kellogg School of Management at Northwestern University in Evanston, Illinois.

The authors said that understanding the patterns of elite scientists can uncover “insightful markers for exceptional scientific careers”, to help identify stars in the making.

With lead author, Jichao Li from China's National University of Defense Technology, Wang and his colleagues constructed the career histories of 545 Nobel laureates in physics, chemistry, and physiology or medicine from the years 1900 to 2016. They combined data from sources such as the Nobel Prize website, university websites, and publication and citation records.

A control group was compiled by randomly selecting 20 scientists for each laureate who worked in the same discipline and started their careers at roughly the same time as each of the laureates.

The findings were published in the Journal of the Royal Society Interface.

The results show that Nobel Prize-winners were more likely to have more than one ‘hot streak’ – randomly timed phases of unusually high achievement, such as publishing a string of high-impact papers – than their colleagues.

Their hot streaks also lasted longer, peaking at roughly 5.2 years, while the hot streaks of the control scientists reached their peak at 3.7 years, based on when they published their most highly cited works.

Laureates also made the most of their high-performing phases, with 88% producing their prize-winning works during a hot streak.

But it's not all high-flying for prize-winners. Papers published by laureates one year after receiving the Nobel attracted 11% fewer citations, on average, compared with those published in the year prior to the win.

Physics laureates were hit hardest by this ‘Nobel dip’, with their citations falling by 18% in the 2 years following their win. Physiology or medicine laureates experienced a 13% drop, on average, while the impact of papers by chemistry winners fell by roughly 5%.

There’s no suggestion the laureates had lost their touch. Rather, the team also found that a laureate was 14% more likely to change their research topic after winning the prize than at any other stage of their career – a decision that appeares to have affected the impact of their work.

And the decline was short-lived. Citation counts returning to pre-Nobel levels four years after winning the award.

While the study authors concluded that the Nobel dip is likely due to laureates shifting their research focus, Australian laureate Barry Marshall, who won the 2005 Nobel Prize in Physiology or Medicine with pathologist Robin Warren, points out that increasing demands could also play a role.

Andre Geim, who shared the 2010 Nobel Prize in Physics with Konstantin Novoselov, says the first two years after the Nobel prize are “very disruptive”.

“Many new obligations take [their] toll,” says Geim, who is based at the University of Manchester in the United Kingdom. In addition to media enquiries, many laureates dedicate their time to their chosen good causes, he says.

A way to keep the momentum going post-Nobel is to keep asking questions, says May-Britt Moser, who was awarded the 2014 Nobel Prize in Physiology or Medicine with Edvard Moser and John O-Keefe.

“I have never been involved in science because I intended to get the Nobel Prize,” says Moser, a neuroscientist at the Norwegian University of Science and Technology in Trondheim.

“The Nobel Prize never interfered with my curiosity and I am so lucky that we still produce high impact science.”