What we know about the academic journal landscape reflects global inequalities

This visualization highlights how little we know about non-English scholarly production. 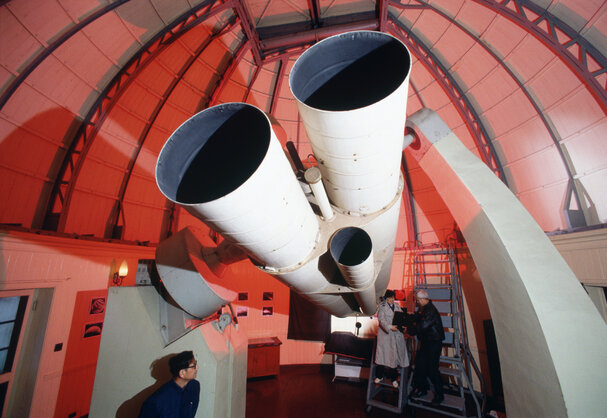 The 40-centimeter Double Astrograph, used at Purple Mountain Observatory in Nanjing, China to track asteroids. Chinese-language journals are among the scientific literature that isn't wholly captured by the dominant scholarly databases.

In the early 16th century, an unnamed artist created what has since become known as the Lenox globe (see figure 1).

One of the earliest known terrestrial globes (Magellan had not yet circumnavigated the earth when it was created), it presents a fascinating glimpse into the early-modern European imagination, with Europe at the heart of a world full of vast seas, uncharted lands and bestial terrors.

Lest the reader be in any doubt of the dangers these uncharted territories held, HIC SVNT DRACONES (‘Here be dragons’) is inscribed on the continent of Asia, just beneath the equator. This is a world dominated by what Pawson and colleagues term ‘Rumsfeld’s paradox’ (after former US Secretary of Defence, Donald Rumsfeld): known knowns, known unknowns and unknown unknowns.

Mapping the global scholarly publishing landscape today seems just as daunting a task as the efforts of those early cartographers because the territory is equally uncharted. In short, we simply don’t know how much academic scholarship is currently being published.

This is a very different situation from sixty years ago, when Derek de Solla Price published the first data modelling the growth of scientific periodicals.

Based on the assumption that scholarly publishing had various material limits – from the number of publications any individual could produce during their lifetime to the volume of scientists required to produce them – de Solla Price suggested that the peak in scientific publishing had already passed.

However, the doubling of scientific journal articles every 10-15 years has continued unabated since the 1960s.

There are a variety of reasons for this exponential growth – the shift from print to digital is clearly part of the explanation, but so too is the transformation of publications into ‘outputs’.

As Biagioli and Lippman’s recent edited volume on academic gaming makes clear, once publications are conceived primarily as grist for the CV mill, there are few material limits on what can be produced – especially given the growing array of journals willing to publish whatever is submitted.

Yet, much like the early-modern cartographic representations of the globe, with their civilized European centre and dangerous uncharted peripheries, the inequalities embedded in scholarly publishing have been similarly naturalized.

Researchers are frequently warned that scholarly communication is a perilous landscape to navigate, full of treacherous publishers ready to dash researchers’ careers on the shoals of hokey publications.

‘Here be dragons’, industry watchdogs cry – most explicitly via the alarm about ‘predatory publishers’, a term coined by the librarian Jeffrey Beall and now in wide circulation.

However, as the results of ‘sting’ operations on so-called predatory publishing reveal, the perceived ‘danger’ zones resemble the uncharted territories on the Lenox Globe.

Indeed, we have argued (here and here) that discourses on predatory publishing, with their racist subtext, reproduce a coloniality of power/knowledge that characterizes all ‘entrepreneurial’ and non-mainstream publishers as fraudulent and exploitative.

Other cartographic representations of publishing are clearly possible, such as Hennig’s map of global publishing markets, which, although not focusing on scholarly publishing per se, aims to highlight countries forming ‘powerful centres of gravity’ and those that are ‘lost in the periphery’.

With a similar agenda, we present our own tentative map of the global journal publishing landscape below, aiming to highlight the known knowns, the known unknowns and the unknown unknowns.

Unlike Rumsfeld, whose ‘unknowns’ were designed to justify intervention (‘dragons’, after all, must be conquered), our interest is primarily in what the unknowns reveal about our own knowledge practices.

We are thus mindful of what Slavoj Zizek terms the ‘unknown knowns’: ‘the knowledge that doesn’t know itself’. These, for Zizek, are the ‘silent presuppositions we are not aware of [that] determine our acts’. 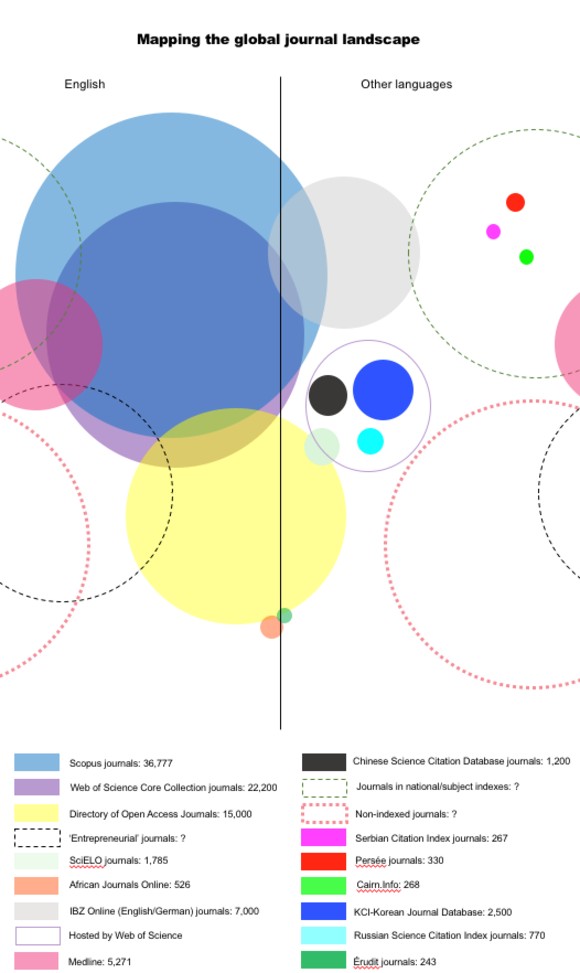 This cartographic visualization of global scholarly publishing aims to highlight how little we know about non-English scholarly production, and how our views of the global landscape are skewed by the dominant databases (the known knowns): especially Web of Science and Scopus.

Web of Science is, of course, the oldest and most influential known known, its restricted size having been transformed into its most flaunted virtue via the ‘Journal Impact Factor’. Yet, these databases cover a small proportion of published journals – especially once we look beyond the English-language literature, where their coverage is highly restricted.

When we attempted to go beyond the English-language journals, our simultaneous reliance on indexes and ignorance of those outside of English-language contexts (except where hosted by Web of Science) became abundantly clear.

Thus, the map quickly became highly speculative, hindered by our attempts to find non-English journal databases via English-language Google searches, which mostly directed us to English-language journals focusing on non-English regions and languages (given the growing centrality of Google to academic research, the problem is clearly one of databases the whole way down).

This brings us to Zizek’s unknown knowns: the ways in which our presuppositions and prejudices about this cartography and its imagined ‘dragons’ have been influenced by the dominant academic discourse around so-called ‘predatory’ publishing.

There is much to learn, but also much to unlearn.