UK challenges US in Nobel dominance

A per-capita analysis of physics, chemistry and medicine laureates since the turn of the century reveals the United Kingdom as the most prolific nation. 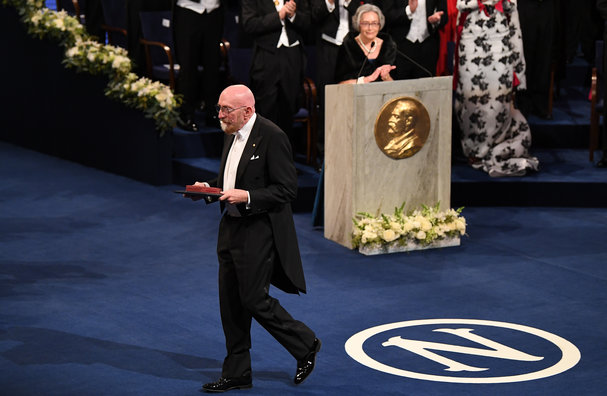 American theoretical physicist, Kip Thorne, receiving his award for the Nobel Prize in Physics 2017 at the annual ceremony in Stockholm.

In 2017, five researchers from the United States received Nobel science prizes. Winners that year included two Germans, a Swiss and a Scotsman. But the group of five from the US, acknowledged for their contributions to the observation of gravitational waves and the mechanisms underpinning our biological clock, was the largest of any country.

But, a significant degree of US prominence in global science can be attributed to its sheer size, finds an analysis of Nobel laureates in the natural sciences relative to population. The study of four nations, the US, Germany, France and the United Kingdom, published in Royal Society Open Science, covers the entire period since the Swedish Academy first awarded the prize in 1901.

Researchers in the US received Nobel prizes at an increasing rate after World War Two, peaking around the time of the Moon landing in 1969, says author Claudius Gros, a theoretical physicist at Goethe University Frankfurt.

Many metrics have been used as a proxy for scientific excellence, including those that look at publications, journals and citations. But the Nobel is “the non plus ultra for scientists — the prize that everyone wants to get,” says Gros.

He was curious to find out how his country, Germany, fared in terms of scientific productivity at the highest level. Since the Nobel Prize can be split between up to three researchers, he calculated the fractional count of the four countries for which there was sufficient data, and then adjusted for population size.

He was surprised by the results. His analysis found that the most successful time for Germany was during a period known as the Gründerzeit, or founder’s time, in the late 1800s–early 1900s, soon after the country’s unification. “There was a big cultural and economic expansion,” he says. “Many big companies were founded then — Mercedes, BMW, Siemens.”

“We had always believed that the golden age of science in Germany was in the 1920s,” he says, referring to a time when European scientists were establishing the foundations of quantum mechanics. In 1921, Albert Einstein, who was born in Germany, received the Nobel Prize in Physics.

From receiving an average of 1.64 prizes for every 100 million residents in 1903, Germany received 0.24 prizes in 2017. That fractional rate has remained constant since the 1960s. France has also maintained a constant rate of around 0.2 since the 1930s, but the United States has followed a different trajectory. Its share of prizes increased to a peak of 0.83 in 1972, and has since gradually declined to 0.34 last year.

Among the four nations, the UK stands out for Nobel Prize consistency. Apart from a 20-year dip between 1985 and 2005, it has sustained a rate of about 0.9 prizes for every 100 million residents since 1900. “It has very good track record when accounting for size of the country,” says Gros.