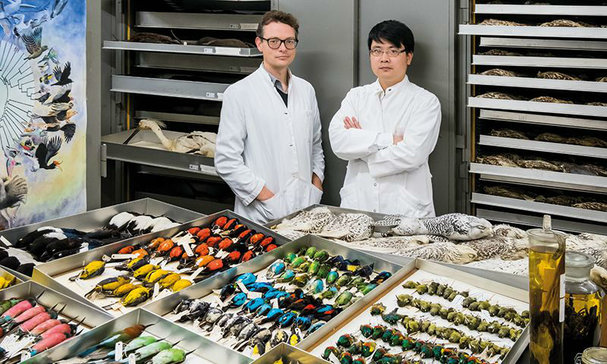 Tom Gilbert from UCPH and Zhang Guojie from BGI at the Natural History Museum of Denmark in Copenhagen.

Corporations have been scaling back their own in-house research in favour of teaming up with universities to advance scientific discovery in disease and drug development.

While overall corporate research output has declined since the 1980s, the number of partnerships between corporate and academic or government institutions more than doubled from 12,672 connections in 2012 to 25,962 in 2016, as tracked by the Nature Index.

Over the same period, close to 90% of the papers that corporations authored in leading journals were in collaboration with researchers in academic or government labs.

Below is a breakdown of the most prolific corporate–academic collaborations in biomedical sciences in 2015 to 2018, as tracked by the Nature Index.

One of the most prolific corporate–academic partnerships in high-quality research output, Swiss multinational pharmaceutical company Novartis and Harvard University have formed a number of collaborations to advance research in the biomedical sciences.

In early 2018, it was announced that Novartis was teaming up with the Wyss Institute for Biologically Inspired Engineering at Harvard University and the Dana-Farber Cancer Institute – a principal teaching affiliate of Harvard Medical School – to develop implantable and injectable systems that can bolster a patient’s immune responses to different types of cancer.

Other Novartis–Harvard collaborations include work with the Broad Institute, which produced key findings about how Zika virus attacks the brain of developing foetuses, and several collaborations with labs in Harvard’s Department of Systems Biology to explore new drug candidates and develop basic research insights and methodologies.

With the purchase of Icelandic genetics company, deCODE Genetics, for US$415 million in 2012, American biotechnology giant, Amgen, is working with the University of Iceland on genome-wide association studies to find small genetic variations in the human genome that could indicate a higher risk for certain diseases.

Based on journals tracked by the Nature Index over the past three years, the pair had the top corporate–academic collaboration by article count in the biomedical sciences.

It was bested by Novartis and Harvard in fractional count, which measures the share of an institute’s contribution to a particular study, but produced 21 more papers in this period.

Based in Shenzhen, the city that links Hong Kong to China’s mainland in the country’s southeast, BGI is one of China's largest commercial providers of genomic sequencing and analysis services. Its most frequent academic partner, according to a Nature Index analysis, is the University of Copenhagen (UCPH) in Denmark.

This collaborative relationship, established even before BGI became a corporate entity, involves UCPH researchers providing samples and ideas, while BGI performs the genomic sequencing and analysis.

Notable examples of their work include meta-genomic sequencing of human gut bacteria and helping piece together ancient DNA.

A global pioneer in pharmaceuticals and diagnostics, F. Hoffmann-La Roche AG is one of the world’s largest biotech companies, and it has been working with Harvard for several years.

More recently, Roche and US biotechnology company, Ionis Pharmaceuticals, have been working with Harvard researchers to develop a drug to delay the progression of Huntington’s disease.

The only domestic partnership in the top five corporate–academic collaborations in biomedical sciences as tracked by the Nature Index, AstraZeneca and the University of Cambridge have the benefit of sharing facilities among their researchers – including at the Cancer Research UK Cambridge Institute, the largest single facility conducting cancer research at the University of Cambridge.

In 2014, four new multi-year collaborations between the prestigious university and multinational biopharmaceutical giant were announced, to advance research in neurodegenerative diseases such as Alzheimer’s, Parkinson’s and multiple sclerosis, and different types of cancer.

View a ranking of the Top Corporate Entities in the Nature Index.

The top academic and corporate partners in the Nature Index