Scientific discoveries can be big business, but the road is long. 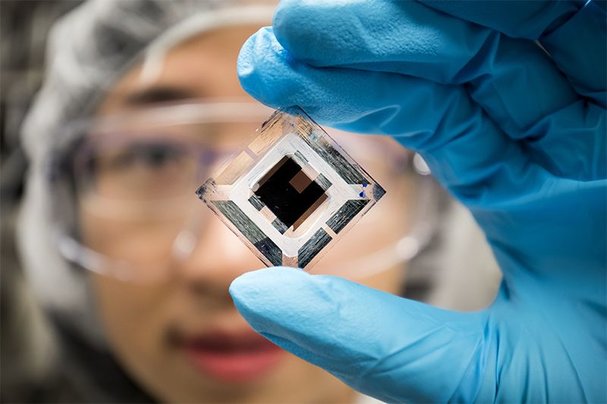 Renewable energy conversion rates are improving through breakthroughs in technologies such as organic solar cells.

The hunt for new, commercially viable materials with highly sought-after properties is one of the most competitive pursuits in scientific research. It offers clear applications, strong paths to market and is among the most interdisciplinary of the physical-sciences research fields.

Even so, relatively few discoveries, such as organic light-emitting diodes (OLEDs) and, to a lesser extent, graphene, rise above the throng of nascent materials; many languish in the scientific literature.

The stakes are high: a new material in the right place and at the right time can launch a multibillion-dollar industry. Consider what happened for Charles Goodyear. When he mixed sulfur with natural rubber and invented vulcanized rubber in 1839, his discovery gave rise to a multitude of new rubber products with unprecedented tensile strength and elasticity.

Artificial intelligence might prove to be the Charles Goodyear of our era. Machine-learning techniques are being used to comb through published research to unearth materials already discovered but forgotten, and to predict the properties of new materials that don’t yet exist.

This replaces the trial-and-error approaches the field has relied on. According to James Warren, a physicist at the US National Institute of Standards and Technology in Gaithersburg, Maryland, in a very dynamic field it’s one of the most exciting developments in recent years.

Stephen Forrest, a physicist at the University of Michigan, Ann Arbor, who invented phosphorescent OLEDs, is well aware of that. In 1994, New Jersey-based company, Universal Display Corporation, was founded to develop displays based on OLEDs.

The company is now valued on the NASDAQ at more than US$9 billion, and has more than 5,000 issued and pending patents worldwide, with offices in the United States, China, South Korea, Japan and the United Kingdom. “The technologies that we had [at launch] were not particularly compelling to the market,” Forrest says.

“Things happened both within the marketplace and within our lab and it sort of exploded, and now we have a $20-billion global display market based on OLEDs, and every one of them use our materials.”

Forrest has helped establish several companies based on his research, covering areas such as organic solar cells, which are lighter and more flexible than their silicon counterparts, and indium gallium arsenide detectors for infrared imaging. But it’s not just a matter of creating a new type of material and setting up shop.

“You’ve got to be solving a real problem that people have an interest in,” he says. “You can’t invent markets through work in the laboratory.”

Companies often say it takes at least 10 years for a material to move from the laboratory to the market, says Zhenan Bao, a chemical engineer at Stanford University in California who works with nanomaterials and flexible electronics, including organic semiconductors and carbon-based circuits.

In 2010, Bao’s lab spun out C3 Nano, a company that makes a flexible, transparent electrode based on silver nanowires. It’s being used in some foldable displays and mobile phones available in China, she says, and may soon spread elsewhere. Since she was at Bell Labs (now owned by Nokia) 20 years ago, she has been working on foldable displays that could fit more phone screen in a given space.

Graphene could be an important component of the necessary flexible electronics for Bao’s electronic skins. Its unique properties have excited scientists since the material was first isolated in 2004. A one-atom-thick layer of carbon, graphene is stronger than diamond, has the highest electron mobility of any known material, and is more than 97% transparent to wavelengths of light from the ultraviolet to the far infrared.

Those properties could come in handy, but so far, no one has come up with an application that has had much of an impact in the marketplace. Grand View Research estimates the global market for graphene was only $43 million in 2017, mainly in applications such as protective coatings for flexible electronics.

Google recently demonstrated Sycamore, a computer with 53 quantum bits, which performed a test calculation in just over three minutes that would take a supercomputer running at full capacity much longer. To really make a practical quantum computer, though, will take thousands or millions of quantum bits, and topological materials could create the technology to turn that into reality.

Additive manufacturing, also known as 3D printing, is another field that’s taken hold in the past few years thanks to materials advances. When it was first developed, 3D printing was used mainly to make prototypes of various tools by having a laser transform powders into a solid, or extruding a thermal plastic through a nozzle.

Researchers have since learnt how to work with a variety of materials, including metals and conductive plastics, to make parts for products. Boeing, for instance, is pursuing additive manufacturing as a more cost-effective way to make plane parts, and has invested in 3D printing companies.

In 2018, the US aviation giant put money into Digital Alloys, a Massachusetts-based company with a technology that allows it to print different types of metals together to enhance their mechanical or thermal properties.

The multinational manufacturing conglomerate, 3M, which makes everything from transparent bandages to Post-It notes, has great interest in emerging materials innovations, says Greg Anderson, vice-president of its corporate research laboratory in Maplewood, Minnesota.

Despite the great potential for innovative products, there is significant risk that new materials discoveries will never amount to something marketable. Because of this, many companies like to support their development in small steps, by sponsoring academic research and funding university spinoffs, to see whether the technologies that emerge are worth more significant investment, Anderson explains.

“We’ll do sponsored research to help us mitigate the risk,” he says. “We’ll spend a little bit of money in partnership with the university to advance the science and see how feasible that technology is.”