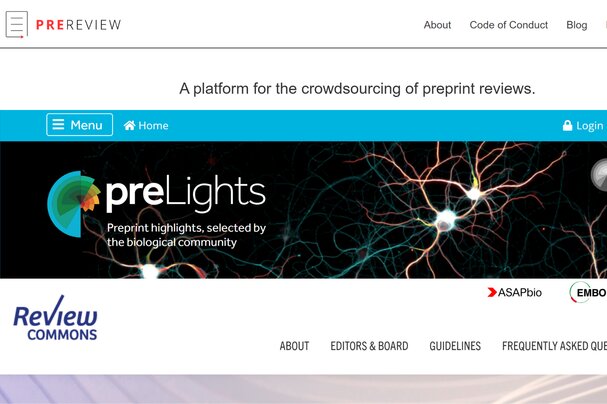 As preprint servers are swamped daily with COVID-19 paper submissions, new curation and review platforms have emerged to help researchers find the stand-outs.

According to Máté Pálfy, community manager at preprint curation website, preLights, only a handful of such third-party platforms have been launched to date, but that could soon change.

“Post-pandemic, I expect that the use of preprints will continue to steeply rise, and with it we might see more services that review or curate preprints,” says Pálfy.

While preprints accounted for just 2.2% of all papers indexed on the life sciences search engine PubMed in 2019, they make up an estimated 34% of all COVID-19-related papers indexed on PubMed since January 2020.

“There are complaints about the variable quality of preprints, including flawed science,” says Inglis. “But that is a consequence of [it] being an open server.”

Listed below are three online platforms aimed at helping researchers produce better preprints, and a fourth one in the making

PreLights makes finding the most relevant and reliable preprints easier by highlighting key biology papers on a freely accessible platform.

Highlighted preprints are selected by a team of early-career researchers, who publish detailed summaries on the findings and their significance.

The website includes coronavirus-related resources such as link to peer reviews from organizations and leaders in the field, online discussions between authors and researchers, and a timeline tracking the progression of the pandemic.

It is openly accessible to researchers and members of the media and the general public.

“We’re seeing unprecedented use of the comments section where ‘mini’ peer reviews are taking place,” says Jonathon Coates, an immunobiologist at the University of Cambridge in the UK, who helped build covidpreprints.com.

“This allows the wider public and other scientists to see what specialists think of a preprint.”

Review Commons provides independent reviews for unpublished manuscripts in the life sciences and biomedical sciences before they are submitted to journals.

Founded by ASAPBio and EMBO Press, Review Commons is designed to closely resemble the initial stages of peer review at journals, but enables reviewers to “focus on improving the science within a paper, rather than judging whether it is fit for a specific journal”, says Jessica Polka, project lead at Review Commons.

Reviews are carried out by editors at EMBO Press, which publishes The EMBO Journal among others. Authors are provided with a refereed preprint that includes reviewer comments and responses from the authors.

The platform automatically posts these refereed preprints on bioRxiv, which saves the authors from having to submit it themselves.

Thomas Lemberger, associate editor at Review Commons and deputy head at EMBO Press, says that adding reviews alongside a preprint “makes the scientific discourse visible to all”.

“The current pandemic makes this level of transparency even more important,” says Lemberger.

PREreview (Post, Read, and Engage with preprint reviews) is an online community where researchers participating in journal clubs can discuss preprints with authors and other researchers.

The platform allows researchers to solicit feedback on their own work or on preprints written by other authors. Users are able to issue a digital object identifier (DOI) for each review they provide, so their reviews can be cited, indexed on search engines, and shared on social media.

In response to the deluge of preprints related to COVID-19, PREreview launched a new web application in partnership with Outbreak Science, a non-profit organization that shares research, data, and code related to disease outbreaks.

The application can be downloaded as a browser extension that allows researchers to read preprints, add reviews, and request feedback.

These preprints will be selected using an automated search engine that detects information about the experimental design of a study, such as what was measured and which parameters were controlled for.

“It is particularly important to reinforce trust by highlighting and providing a direct link to the experimental evidence,” says Lemberger, who is co-leading the project with colleagues at EMBO Press.

“We will prioritize preprints that show a diversity of experimental approaches and make new connections.”