Their protein-saving techniques are in high demand. 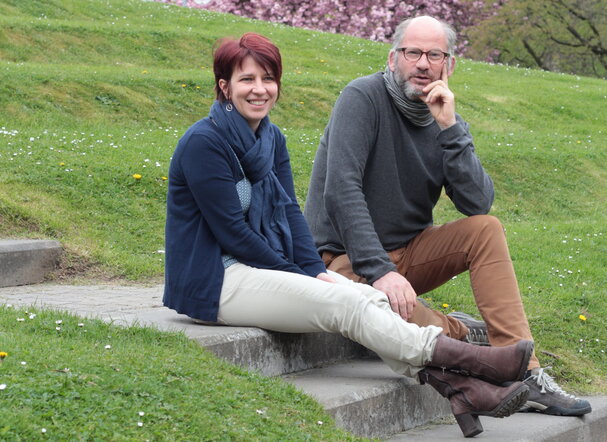 Biologists Jan Steyaert and Els Pardon are using miniature versions of antibodies – components of the immune system – to visualize the delicate architecture of different types of proteins.

Known as nanobodies, they crystallise protein structures as a way of protecting them against the effects of invasive imaging procedures – a technique that has become highly sought-after by researchers working in drug design. Steyaert and Pardon, who are based at the VIB-VUB Center for Structural Biology at the Free University of Brussels in Belgium, have been working together on this approach for more than two decades.

Steyaert draws on his bioengineering background to generate what he calls “wild ideas”, while Pardon uses her expertise in molecular biology to turn them into experiments.

Together, they produce libraries of nanobodies that structural biologists can use to visualize proteins that are notoriously difficult to analyse.

“The skills we bring are quite complementary,” says Steyaert. “In our case, one and one equals more than two.”

Steyaert and Pardon’s partnership is highly productive. According to Dimensions data, they have co-authored 101 papers together since 2009, 45 of which were published in journals tracked by the Nature Index. They also hold 93 patents related to their nanobodies technique.

In 2019 alone, the pair co-authored 11 life sciences papers in Nature Index journals, making them a leading scientific duo in the field.

In two Nature papers last year they described the structure of a type of GABAA receptor, which is a common target for wide variety of drugs, such as anaesthetics and anxiety medications.

Steyaert and Pardon’s co-authorship network for life sciences papers published in Nature Index journals in 2019 is visualized below.

Zoom in and hover the mouse over the lines to view the number of co-publications between authors, as shown by link strength:

“People often come to us when they get stuck trying to determine the structure of their proteins,” says Pardon of their problem-solving reputation.

“I try to guide collaborators on which approach may help, and explore a feasible solution.”

One such collaborator is Stanford physiologist, Brian Kobilka, who won the Nobel Prize in chemistry in 2012 for his work on G-protein coupled receptors (GPCR). Due to the intricate structure of proteins, there is a risk that they will fall apart during imaging experiments. Kobilka used Steyaert and Pardon’s nanobodies technique to determine the structure of a type of GPCR receptor that is a target for anti-asthmatic drugs. Nanobodies were used to crystallize the entire receptor, which allowed Kobilka to safely view its three-dimensional structure.

The paper describing the work, published in 2011 in Nature, has amassed more than 1,000 citations to date.

Steyaert says that his partnership with Pardon has been key to propelling both their research careers forward.

“By putting together our skills, we have been able to make a worldwide impact,” says Steyaert. “That would have been impossible if we hadn’t worked together.”