Thinking of studying chemistry in the United States? Here are 10 universities to consider

Where some of America’s high-powered chemistry research takes place. 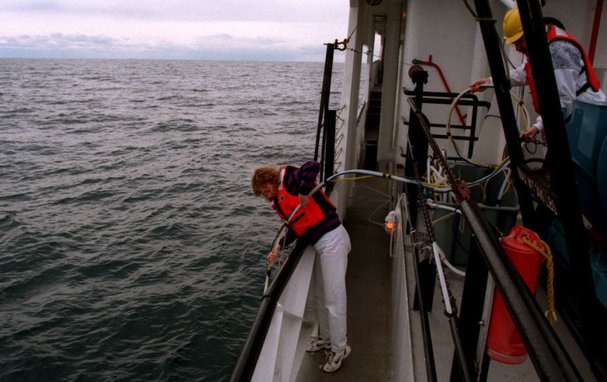 Deb Swackhamer, environmental chemist at the University of Minnesota, manuevers a tube into Lake Michigan so she can extract water to test for levels of the pesticide toxaphene during a research project aboard the Lake Guardian in mid-March on Lake Michigan.

From 2017-2018, the university’s Share++ in the discipline grew by 2.5%, displacing Stanford University from first to third position in the Nature Index 2019 Annual Tables.

The University of Illinois at Urbana-Champaign saw the biggest growth among the leading 10 universities, its Share increasing by more than 16%.

The University of California, Berkeley meanwhile dropped two places, due to a 26.4% fall in its Share in the discipline in 2018.

See the Nature Index 2019 for the full Top 100 academic institutions in chemistry.

With 12,707 faculty and staff on campus and an annual budget of more than US$3.5 billion (2018), almost 85% of MIT’s undergraduates engage in frontline, faculty-led research.

Its Department of Chemistry dating back to 1865, is recognized as one of the best places in the world for chemistry research. Known for its achievements in polymer synthesis and medical imaging, its researchers are focussed on discovering new chemical syntheses, creating sustainable energy solutions, and developing novel materials.

Northwestern was the second-fastest rising institute among the top 10 in high-quality chemistry research output in the Nature Index for 2018 (China’s Nanjing University was the fastest).

One of the star researchers in Northwestern’s Department of Chemistry is Emily Weiss, winner of the 2018 American Chemical Society’s Early-Career Award for her pioneering work on nanocrystals and low-conductivity materials.

Chemistry was one of the 25 founding departments at Stanford University when it opened in 1891. The department awarded its first undergraduate degree to Charlotte Wray in 1894 and its first PhD in 1907 to William Draper Harkins, who would go on to predict the existence of the neutron in 1920.

There are now 24 faculty members in the department. Among them is Nobel laureate, W.E. Moerner, who was awarded the 2014 Nobel Prize in Chemistry for his role in the invention of microscopy techniques that reveal molecular processes in real time.

Other notable Stanford chemists include Frank Abild-Pedersen – named one of the world’s most highly-cited researchers in 2018, thanks to his 2004 paper on atomic-scale imaging of carbon nanofibers attracting more than 1,000 citations – and Carolyn Bertozzi, regarded as one of the top chemists of her generation.

At number one position in the Nature Index 2019 Annual Tables for academic institutions, life sciences, and Nature and Science categories, Harvard also took the second spot in the overall top 10 (behind the Chinese Academy of Sciences) and seventh in physical sciences.

One of the oldest universities in the United States and one of the most prestigious institutions in the world. The first American recipient of the Nobel Prize in Chemistry, Theodore William Richards, was chairman of its chemistry department.

In 2019, Harvard researchers were part of a team that created a new gene-editing tool that could correct 89% of disease-causing defects in the human genome. The Nature paper has been mentioned by 150 news outlets and more than 2,000 Twitter users so far.

Credited for the discovery or co-discovery of 16 elements — more than any other university — the University of California, Berkeley (UC Berkeley) has a well-established history of scientific advances. You can see its fingerprints on 97 berkelium (Bk), 98 californium (Cf) and 95 americium (Am).

Founded in 1868 with 10 faculty members at its original Oakland campus, today, it has more than 1,600 faculty, 130 academic departments, and 80 interdisciplinary research groups.

UC Berkeley houses 19 chemistry research institutes, including the Energy Biosciences Institute and the Pitzer Center for Theoretical Chemistry. Among the institution’s most-discussed papers in 2019 was a study in Nature revealing that cannabis compounds can be made from yeast.

6. University of Illinois at Urbana-Champaign

The University of Illinois at Urbana-Champaign is a force in high-quality chemistry research, which accounts for the majority of its total Share in the Nature Index.

Its Department of Chemistry has fostered interdisciplinary research for more than 100 years, and is home to the Beckman Institute, the Materials Research Laboratory, and the Institute of Genomic Biology.

In 2019, researchers at the University of Illinois Urbana-Champaign were part of a team that used gene-editing to fix a photosynthesis flaw in crops, boosting plant growth by 40%. The Science paper has been mentioned by 122 news outlets and more than 1,200 Twitter users.

7. The University of Texas at Austin

The University of Texas at Austin (UT Austin) has a long legacy of producing high-quality chemistry research. Its Department of Chemistry, which dates back to 1883, today houses seven research institutes, including the Center for Electrochemistry, the Environmental Science Institute, and the Texas Materials Institute.

In early 2019, UT Austin researchers were part of a team that created a DNA-like molecule that can store and transmit information. The findings, published in Science, could have applications in the search for alien life.

Counting synthetic penicillin pioneer, John Clark Sheehan, among its alumni, the University of Michigan has long been one of the biggest players in chemistry research in the United States.

It’s home to the first building constructed for chemistry research in the country, and specialises in areas such as macromolecular and nano-chemistry, imaging and spectroscopy.

The University of Michigan is a global collaborator, with leading institutions such as Germany’s Max Planck Society, the French National Centre for Scientific Research, and China’s Tsinghua University among is strongest research partners.

Chemistry papers account for more than one-third of the University of Minnesota’s total Share in the Nature Index, earning it a place among the leading US universities in the discipline.

In 2019, Michigan researchers were part of a team that published a Science paper that proposed a new method for manufacturing medicines inspired by electric car batteries. The approach could offer a safer and cheaper way to make compounds used in pharmaceutical drugs.

The Department of Chemistry’s Marc Hillmyer was awarded the 2020 Bright Science Award in materials science for his contribution to bio-based and circular materials.

Having just celebrated its 100th birthday, the University of California, Los Angeles (UCLA) is one of the youngest universities in Nature Index’s top 10 universities publishing in Nature and Science, and receives the most student applications of any university in the United States.

UCLA boasts some of the most advanced chemistry facilities in the country, including the Molecular Instrumentation Center, the X-Ray Diffraction Laboratory, the Materials Characterization Laboratory.

In early 2019, UCLA researchers created a lightweight ceramic aerogel that can withstand extreme temperatures. Published in Science, the new material could be used as insulation on spacecraft.

+The Nature Index is one indicator of institutional research performance. The metrics of Count and Share used to order Nature Index listings are based on an institution’s or country’s publication output in 82 natural science journals, selected on reputation by an independent panel of experts in their fields. Nature Index recognises that many other factors must be taken into account when considering research quality and institutional performance; Nature Index metrics alone should not be used to assess institutions or individuals. Nature Index data and methods are transparent and available under a creative commons license at natureindex.com.

++Share, formerly referred to in the Nature Index as Fractional Count (FC), is a measure of an institution's contribution to articles in the 82 journals tracked by the index, calculated according to the proportion of its affiliated authors on an article relative to all authors on the article.