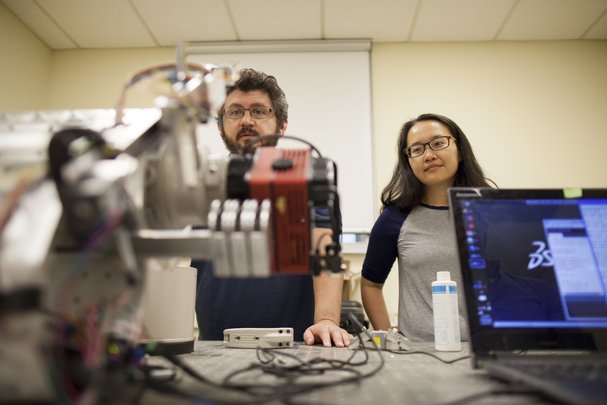 Joint-creator of the Dragonfly Telephoto Array Roberto Abraham and PhD student Jilelai Zhang at the University of Toronto.

The United States and China remain the most prolific countries in the world in high-quality research output, and they owe a lot to their top universities, Harvard and Peking.

In countries like Germany and France, however, where a significant proportion of their research comes from government institutions - the Max Planck Society and the French National Center for Scientific Research (CNRS), respectively - their best-performing universities carry less weight.

When comparing the research output of these universities, Harvard is a juggernaut, with a fractional count of 874.68, which is more than four times the output of Germany’s Ludwig Maximilians University of Munich.

Below is a breakdown of the best-performing universities in the Nature Index top 10 countries. In the 2019 Annual Tables, Australia jostled Spain out of its top 10, bringing its leading university, The University of Queensland, into the global spotlight.

Ranked number one in the Nature Index Annual Tables 2019 for academic institutions, life sciences, and Nature and Science categories, Harvard also took the second spot in the overall top 10 (behind the Chinese Academy of Sciences) and seventh in physical sciences.

One of the oldest universities in the United States, and one of the most prestigious institutions in the world, its full-time faculty number 2,280, with an additional 9,457 full-time affiliated appointees at the Harvard Medical School.

The recent launch of the Harvard Data Science Initiative, involving more than 100 researchers from several schools, and the Harvard Quantum Initiative, which brings together scientists and engineers from across sectors to leverage the advances in how information is gathered, stored and processed, exemplifies the new era of collaborative research.

In 2018, its ranks in the categories of chemistry, Earth and environmental sciences, physical sciences and life sciences were fifth, tenth, 11th, and 39th, respectively. It outranks Tsinghua in the academic and chemistry tables, but is outranked in physical sciences.

Since its founding in 1472 by Duke Ludwig IX of Bavaria-Landshut, Ludwig Maximilians University (LMU) of Munich has become a strong producer of high-quality research. The German university has taken the top spot as the country’s leading academic institution for four consecutive years.

With almost 51,000 students, LMU is the second largest university in Germany in terms of student population. In 2018, its annual budget totalled €1.8 billion (US$1.98 billion), with the state providing around one-third of its funding.

Last year, LMU researchers led a study that showed that baboons with genetically modified pig heart transplants can survive for up to 195 days. The Nature paper was picked up by 66 news outlets and 367 Twitter users.

4. United Kingdom: The University of Cambridge

The University of Cambridge hit its highest rank in four years in 2018 as the fourth most prolific academic publisher of high-quality research, as tracked by the Nature Index.

Cambridge is one of the world’s oldest higher education institutions, and one of its most prestigious, with a track record of more than 800 years. More than 100 of its staff or alumni have won Nobel prizes and it is the birthplace of significant discoveries such as the structure of DNA, and how to split the atom.

Today, its rising stars include Rogier Kievit, who studies neurodevelopmental changes in cognitive abilities such as reasoning, problem-solving and goal management. Another notable figure is Hannah Critchlow, who has been named a Top 100 UK scientist by the Science Council for her work in science communication.

5. Japan: The University of Tokyo

Founded in 1877, the University of Tokyo is the oldest and largest of Japan’s national universities. It has produced 15 prime ministers, 10 Nobel laureates, and five astronauts, among other notable alumni. It also ranks sixth in the world for high-quality research output in physical sciences in the Nature Index, and ninth overall in the Nature Index top 10 research institutions for 2018.

Chemist Hiroaki Suga heads an organic chemistry laboratory at the University and is the co-founder of PeptiDream, a US$5-billion biotech company. Suga is regarded as a key example of how professors in Japan can be successful in both academia and industry, having secured lucrative partnerships with pharmaceutical companies worldwide.

Named after its two most high-profile Nobel Laureates, the Pierre and Marie Curie University today boasts 17 Nobel Prize-winners overall, who have made significant contributions in quantum physics and the discovery of the HIV virus.

Prior to its merger, Pierre and Marie Curie University was comprised of 120 research units which housed 3,750 researchers. Located in the centre of Paris, around 20% of its 34,000 students were from other countries.

In October 2018, researchers from the merged university co-authored a paper with an international team showing that Earth’s oceans have absorbed 60% more heat than previously thought. Published in Nature, the findings were mentioned in 120 news outlets and more than 1,500 tweets.

From insulin to stem cells, the University of Toronto is home to several big discoveries in the natural sciences. The 200-year-old university carries on this tradition today as Canada’s top academic producer of high-quality research in journals tracked by the Nature Index.

With more than 91,000 enrolments across three campuses, the University of Toronto has the largest enrolment size among Canada’s universities. In 2018, its research budget grew to CA$1.27 billion (US$960 million), most of which came from grants awarded by federal agencies.

Last year, researchers at the University of Toronto co-authored a Nature paper revealing the first evidence of interbreeding between Neanderthals and Denisovans. The study captured the attention of online audiences, picking up mentions from 178 news outlets and over 1,300 Twitter users.

Established in 1855 as a dedicated science institution, the Swiss Federal Institute of Technology Zurich (ETH Zurich) has a long history of ground-breaking advances, particularly in physical sciences, chemistry and mathematics.

With 500 professors and 260 senior scientists, ETH Zurich has jumped from ninth to seventh place for academic institutions in the Nature Index since 2017.

Founded in 1946 in the midst of the Korean War, Seoul National University has grown to include 2,609 full-time faculty members and 11,591 graduate students. It has maintained its place as the top academic institution in South Korea in the Nature Index since 2016.

The first national university in Korea, Seoul National University is spread over three campuses in Seoul and one in the mountainous Pyeongchang county. The university’s annual budget in 2018 was 797 million South Korean won (US$670,000), with donations contributing around a quarter of these funds.

In 2018, Seoul National University researchers co-authored a Science paper revealed that the deadly chytrid fungus, which is wiping out amphibian populations around the world, originated in the Korean peninsula.

10. Australia: The University of Queensland

Home to one of 11 Australian Nobel Laureates, The University of Queensland has become a scientific powerhouse since opening its doors in 1909. For the second year in a row, it is the leading academic institution in Australia for high-quality research output.

The University of Queensland houses 1,440 researchers across eight research institutes, including the Australian Institute for Bioengineering and Nanotechnology and the Global Change Institute. It is a founding member of the Group of Eight universities, which includes Australia’s top research-intensive universities.

Among the university’s most high-profile achievements last year was the sequencing of the entire koala genome, published in Nature Genetics in July 2018. This represents the most complete marsupial sequenced genome to date.