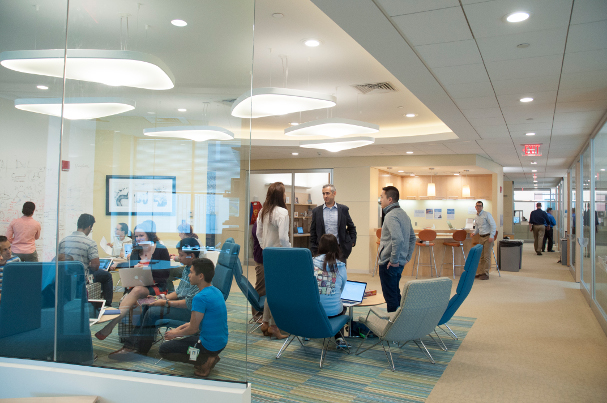 An environment that encourage research partnerships could be the key to overcome obstacles.

An encounter helped kick-start the development of new cancer drugs.

Every Tuesday, a group of cancer researchers from institutions around Boston meet at the Broad Institute of MIT and Harvard to present their work and discuss ideas.

At such a meeting in March 2014, children’s cancer specialist, Andrew Hong, heard scientists from MIT’s Koch Institute for Integrative Cancer Research speak about a micro-scale device they’d developed for delivering a tiny amount of a drug to a tumour.

For six months, Hong, from the Broad, had been leading a project to identify drug targets in children’s cancers. He and his fellow physicians had lamented for years the limited treatment options for children with rare cancers.

With Broad colleagues, Yuen Yi Tseng and Jesse Boehm, the team had already collected tumour samples from cancer patients, from which they had generated cell lines. David Root, also of Broad, had then screened the cells for potential drug targets using RNA interference to turn off certain genes to see what effect that had on the tumor cells. The team had also sought the expertise of Stuart Schreiber, of Broad and the Howard Hughes Medical Institute in Maryland, who uses CRISPR to knock out genes using a different mechanism. Using the two approaches, the team had identified two genes to target with drugs. The next step was to figure out a way to test drugs on the targets in lab-grown tumours. When Hong heard the Koch Institute’s Oliver Jonas, Michael Cima, and Robert Langer speak about their micro-scale device, it sounds like a perfect fit. Hong co-opted the three to their project.

They found that drugs that affected those gene targets did in fact interfere with cell growth, while a control drug did not, and that a combination of drugs worked even better. Though the drugs will need to go through a long development process before they’re approved for clinical use, there is now at least a potential treatment for a cancer where there had been none. In the end, their paper in Nature Communications listed 33 co-authors affiliated with six institutions.

Collaboration is made easier by the local concentration of cancer researchers, Hong says.

This piece is a part of a series of stories on the power of scientific collaborations. Read how proximity was a factor in Hong and his team's recent discovery.