The rise and rise of a biology superstar

Nobel laureate Yoshinori Ohsumi’s persistent study of baker’s yeast spawned an exciting new field, and proves the value of supporting scientists in pursuit of their passion. 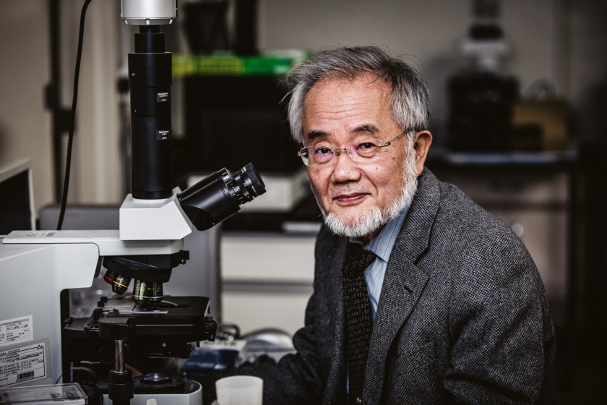 A biology superstar owes a lot to the humble microorganism that has provided the world with bread and booze since antiquity. Yoshinori Ohsumi’s dogged study of yeast’s inner workings spanned decades, eventually winning the 2016 Nobel Prize in Physiology or Medicine for his insights into how cells digest and recycle their own components.

Autophagy, as these processes are known, is the subject of wide-ranging research in such fields as longevity and cancer. But, few people knew much about Ohsumi before he took the podium at the Karolinska Institute in Stockholm in December 2016 to deliver his Nobel lecture in which he extolled yeast’s many lessons, and its “wonderful gifts of sake and liquor.”

It’s unusual for the medicine Nobel to go to a single researcher, and Ohsumi’s win highlighted the importance of individual research in the age of large, international collaborations.

“In my time, I would do research because I was interested in a subject, but young people want to know whether a subject will yield a good paper or be beneficial for their career,” says Ohsumi, a 72-year-old honorary professor at the Tokyo Institute of Technology. “I don’t like that attitude. I’ve always said it’s a serious problem for new fields of research. If you want to have a paper in a famous journal, you should work on a popular subject. If you’re starting something new, though, it takes a lot of time.” Born in 1945 in Fukuoka on Japan’s southern island of Kyushu, Ohsumi enjoyed collecting bugs as a child and entertained becoming a chemist while in his high-school chemistry club. But, when he started at the University of Tokyo chemistry classes bored him. Intrigued by the dynamism of living cells, he turned to molecular biology. After completing a graduate degree, he worked as a postdoc researcher at Rockefeller University under Gerald Edelman, who had won the Nobel Prize in Physiology or Medicine only two years earlier.

Ohsumi then returned to the University of Tokyo and in 1988 opened his own lab. He focused on yeast vacuoles, specialized structures that can break down molecules for cleaning and other functions in the cell. In a landmark experiment, Ohsumi tried, in mutated yeast cells that lacked degradation enzymes, to prompt the autophagy process by starving them of nitrogen. Under a microscope, Ohsumi saw that the cells’ vacuoles were full of small structures that could not be dissolved, later called autophagosomes, proving that the process occurs in yeast. This also gave him a method to identify the genes involved in autophagy. How yeast cells break down their own proteins when starved would demand Ohsumi’s attention for the next 28 years.

“Everyone believed protein synthesis was so important to life, but in my opinion, protein degradation is equally important,” Ohsumi says. “If you have a defect in autophagy activity, the cell might have many defects and some could be related to disease.”

Ohsumi estimates that fewer than 20 papers on autophagy were published each year when he began, but that tally is now in the thousands. He cautions, however, that autophagy has many functions and that its role in illness is unclear.

Ohsumi is now a star, but many Japanese scientists who would also aspire to greatness face challenges in terms of funds and other resources. Government funding has not kept up with rising costs to do research. Ohsumi says he has been lucky to have funding from the Ministry of Education, Culture, Sports, Science and Technology as well as highly qualified colleagues and students from Japan — including his wife Mariko, who taught at Teikyo University of Science and co-authored many papers with him. The wealth of home-grown talent was one reason that Ohsumi hasn’t sought many international collaborations.

As research into autophagy expands, Ohsumi intends to continue observing yeast cells under his microscope for as long as he can.