As revenues and research output soar in the field of AI, global competition between the United States, China and Europe heats up. 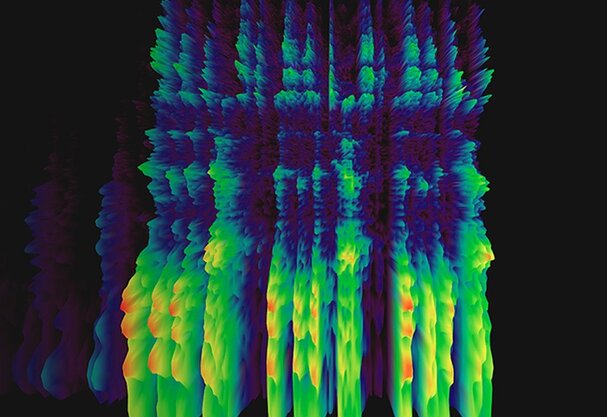 A spectrogram of the sound of a human voice, used by voice-recognition software.

The idea of artificial intelligence (AI) — systems so advanced they can mimic or outperform human cognition — first came to prominence in 1950, when British computer scientist Alan Turing proposed an ‘imitation game’ to assess whether a computer could fool humans into thinking they were communicating with another human.

Soon after, researchers at Princeton University in New Jersey built MADALINE, the first artificial neural network applied to a real-world problem. Their system, modelled on the brain and nervous system, learnt to solve a maze through trial-and-error.

Since then, the rise of AI has been enabled by exponentially faster and more powerful computers and large, complex data sets. Applications such as machine learning, whereby a system identifies patterns in large sets of data, have demonstrated the potential for AI to be practical and profitable.

Today, AI forms the basis of computer systems handling tasks such as voice recognition and translation on smartphones, piloting driverless cars, and controlling robots that automate chores in homes and factories.

In research, AI is being used in a growing number of applications, such as processing the enormous amounts of data that underpin fields including astronomy and genomics, producing climate models and weather forecasts, and identifying signs of disease in medical imaging.

“AI is a foundational science in the same sense that physics is a foundational science,” says Amir Husain, a computer scientist who founded SparkCognition, a company in Austin, Texas, that creates AI-based analytic and security systems. “A lot of people think that AI is a product or technology, but it’s actually an enabler for almost everything we do.”

Business, as a result, is booming. The 2019 AI Index Report, published by the Stanford Institute for Human-Centered Artificial Intelligence in California, estimates that global private investment in AI in 2019 was more than US$70 billion.

The US, China and Europe took the largest share; Israel, Singapore and Iceland were found to invest heavily in per capita terms. Start-ups founded on AI technologies are a major part of the ecosystem, garnering more than $37 billion globally in investments in 2019, up from $1.3 billion raised in 2010, according to the report.

Revenues have also skyrocketed. The International Data Corporation (IDC), a market research company based in Framingham, Massachusetts, predicts that worldwide revenues for the AI market will total $156.5 billion in 2020, an increase of 12.3% over 2019.

Although growth in 2020 is slower than in previous years due to the economic impact of the COVID-19 pandemic, the IDC expects that global revenues will surpass $300 billion in 2024.

As nations vie for leadership, AI research output is increasing rapidly. According to our analysis of journal publications and conference papers tracked by the Dimensions database, the global output for AI research grew from just over 52,000 globally in 2000 to roughly 403,000 in 2019, representing an increase of more than 600%.

Now the most popular specialization among computer-science PhD students in North America, AI is set to continue its steep, upward trajectory.

The United States has historically been the leader in AI-related research output, having accumulated the highest number of publications over the past two decades. But China has ramped up its output in recent years.

In each year from 2016 to 2019, China produced more AI-related papers than any other nation, according to Dimensions. Over this period, China’s output of AI-related research increased by just over 120%, whereas output in the US increased by almost 70%.

Publication numbers aren’t the whole story, says Jeffrey Ding, a PhD student at the Future of Humanity Institute at the University of Oxford, UK, who studies China’s AI strategy.

“Just pumping out raw numbers of papers that don’t have a lasting impact isn’t really useful,” says Ding. “It’s more important to keep up with the technology frontier.”

A Nature Index analysis for this supplement looked at the number of AI-related articles published in the 82 high-quality natural-science journals tracked by the index, which primarily concern the application of AI to research in the broad fields of chemistry, the physical sciences, life sciences, and Earth and environmental sciences.

Between 2015 and 2019, the US was the leader, with the UK, Germany and China in second, third and fourth place, respectively. But China has increased its output in journals tracked by the index.

Although it was the fourth-most prolific country in the index in 2015, with roughly half as many AI-related papers as Germany, China crept up over the next three years, then leapt to second place in 2019, showing an increase of 340%. The US, UK and Germany slightly more than doubled their output over the same period.

For the near future, Ding says, the US is likely to remain the world leader in AI. “Though China has some exceptional universities, such as Tsinghua University, the US dominates in terms of maybe the top 20 universities doing AI research, and that is reflected in the quality of the papers. It’s very unlikely that China will become the singular innovation centre by 2030.”

Many countries see AI as providing a competitive edge, not only economically, but militarily, says Husain. He likens the competition in AI to the Space Race of the mid-twentieth century, in which the US and the Soviet Union vied to be the first to achieve milestones in space travel.

“The Space Race yielded contributions that differentiated the American technological ecosystem from all others for decades to come,” says Husain. “If a country invests heavily in this area, it will yield technologies that will form the pillar of defence capability and economic differentiation for the rest of the century.”

Technologies that can be developed based on AI will indeed have both economic and military benefit, says Daniel Araya, a policy analyst at the Center for International Governance Innovation, a think tank in Ontario, Canada.

“We’re talking new weapons, data-driven innovation for industry and automation, and redesigning how our society works from the ground up.”

Husain points to Germany, which maintains a strong economy that relies on exports of products such as machine parts and automobiles, even though lower-income countries can provide low-wage labour for manufacturing. Germany has been able to compete by using automation to keep manufacturing costs down, while keeping quality and productivity high. AI could reinforce this advantage by powering the next generation of automation technologies.

“Anybody that has mastery over this technology and is investing in implementing it retains an economic lead,” says Husain.

Institutions in Germany, such as the Fraunhofer Society, Europe’s largest application-oriented research organization, have been emphasizing Industry 4.0, a national strategic initiative from the German government to introduce more digital innovation and advanced robotics into manufacturing and supply-chain management.

In China, the ability offered by AI systems to monitor public spaces and scan Internet traffic in an effort to glean user intentions may provide the state with improved tools for social control, enhancing its capability for monitoring the population or censoring information.

Even in countries that don’t officially track their populaces, facial-recognition technology, such as that produced by New York-based company, Clearview AI, is being used by law enforcement to identify suspects. The technology has been met with deep concern by some researchers, who say that biases built into its algorithms could result in ethical and human rights abuses.

Amid the controversy that surrounds certain applications of AI, some groups are highlighting the good it can do. In 2019, the Association for the Advancement of Artificial Intelligence, a scientific society in Menlo Park, California, launched its Artificial Intelligence for the Benefit of Humanity award, a US$1-million prize funded by Squirrel AI, an education technology company based in Shanghai, China.

The inaugural winner, Regina Barzilay from the Massachusetts Institute of Technology (MIT) in Cambridge, Massachusetts, received the award in September 2020 for developing a machine-learning algorithm that can examine mammograms and predict which women are at a higher risk of breast cancer.

Barzilay has also developed a pattern-recognition algorithm that predicts which molecules might make good candidates for new medications. Publishing in the journal Cell, Barzilay and her colleagues described how their system identified a molecule, dubbed halicin, as a potentially potent new antibiotic (J. M. Stokes et al. Cell 180, 688–702; 2020).

When the molecule was synthesized and tested, it was found to kill antibiotic-resistant bacteria. Barzilay continues to work on halicin and hopes to progress it to clinical trials.

With an eye to the potential benefits of AI-based technologies, the US National Science Foundation (NSF) announced in August 2020 that it is establishing five new institutes focused on different topics, each led by a different university, and each to receive $20 million over five years.

And a fifth, led by MIT, will investigate how AI can improve research in fundamental physics. The NSF has put out a call for proposals for eight more AI institutes, which it plans to announce next year. “We have a long history of supporting basic research in artificial intelligence,” says Erwin Gianchandani, the NSF’s deputy assistant director for computer and information science and engineering.

In addition, the US Department of Agriculture’s National Institute of Food and Agriculture has committed to funding another two institutes each with $20 million over five years to apply AI to questions of crop yield, pest resistance and food distribution.

Access to massive data sets on which to train machine-learning systems is one advantage that both the US and China have, says Araya. Europe, on the other hand, has stringent data laws, which protect people’s privacy, but limit its resources for training AI algorithms.

“So, it seems unlikely that Europe will produce very sophisticated AI as a consequence,” he says. “China is at the opposite end of the spectrum, where it has few data protections, and huge access to varied and diverse pieces of data.”

The NSF doesn’t make decisions based on global competition, says Rebecca Keiser, the organization’s first chief of research security strategy and policy. Her position is designed to safeguard the security of federally funded research, while promoting international collaborations.

“We think of it more in terms of the impact that our funding is going to have, rather than from a nation perspective. The fact that it also contributes to US global science leadership is fabulous,” says Keiser. As for competing against China in AI, she says, “We don’t really know how much, and where, they’re investing, so it’s hard to compete against that.”

With funding from other major US agencies, including the Defense Advanced Research Projects Agency and National Institutes of Health, the US government expected to spend almost $5 billion on unclassified AI research in 2020. Other countries are investing, too.

The UK’s Engineering and Physical Sciences Research Council gave out nearly £160 million (US$212 million) in 2020. The European Commission, which has been supporting research through its Horizon 2020 programme, says public and private investment in AI should reach €20 billion (US$23 billion) across Europe by the end of 2020.

Even with other countries placing emphasis on AI research, including Israel, Japan, Singapore and Australia, the race comes down to China versus the US, Araya says.

The refinement of AI systems is driven not simply by academic questions, but by applying the systems’ intelligence to practical problems. Countries will probably make advances by using AI in areas where they already have expertise, says Ding, such as automation in Germany or robotics in Japan.

Having so many researchers around the globe tackling all aspects of AI should advance the whole field, says Keiser. “It’s always good to have a bit of healthy competition.”