An unprecedented space hurricane and an urgent call-to-action in support of Black scientists feature in these widely-discussed studies. 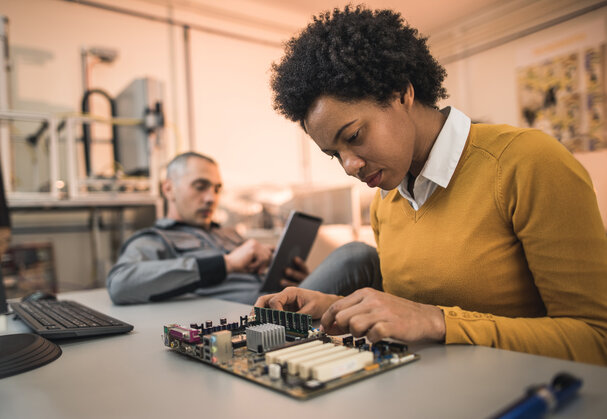 A paper highlighting funding disparity between Black scientists and white scientists in the US is among February's most widely read.

For the first month since March 2020, this list does not include any studies related to COVID-19 – perhaps a sign that the scientific community and general public are gravitating towards other research news topics.

Also included is a paper calling for immediate action to address the disparity between funding for Black scientists and white scientists in the United States.

Here is an Altmetric ranking of February’s most popular papers in the natural sciences, published in the 82 high-quality journals tracked by the Nature Index.

1. “The soundscape of the Anthropocene ocean"

Noises generated by human activity now dominate the acoustic environment of the ocean, and this ‘anthropogenic cacophony’ is becoming louder and more prevalent, according to this widely read Science paper.

A review of 40 years’ worth of published research led by Carlos Duarte, a marine ecologist from the King Abdullah University of Science and Technology in Saudi Arabia, looked at how the rapidly changing soundscape of the ocean, which has taken on increasing levels of noise pollution from fishing, shipping and development, is affecting marine life.

The researchers found strong evidence that anthropogenic noise affects marine mammals, and note that some studies also describe impacts on fishes and invertebrates, marine birds and reptiles. These include compromised hearing ability, physiological and behavioural changes, and in some cases, reduced survival rates.

Human activity doesn’t just make the ocean more cacophonous – the study also found that it makes some areas quieter, as major sources of natural sound, such as whales, have declined due to hunting and habitat loss.

Duarte describes ocean noise pollution as ‘the elephant in the room’ because it’s an issue that receives less attention than other major threats to marine life such as plastic waste accumulation and acidification. But, it’s a potentially easier problem to address, the paper states, as noise pollution ceases immediately if the source is removed.

The study has earned 6 citations so far and has been covered by more than 280 online news outlets. It’s reached an estimated audience on Twitter of almost 6 million.

During discussions in a nationwide network of more than 260 Black and minority ethnic women faculty working in biomedical engineering in the US, one issue persistently dominated: Black researchers continue to receive an insufficient share of funding from the National Institutes of Health (NIH).

The experiences detailed in these discussions are backed by years of data, according to this article published in Cell, which states that in 2014–2016, Black applicants’ award rates remained at roughly 55% of those for white principal investigators (PIs).

“While we continue to nitpick about reasons for this disparity, one fact remains widely agreed upon: the disparity is real,” states the paper, led by Omolola Eniola-Adefeso, the university diversity and social transformation professor of chemical engineering at the University of Michigan, and Kelly Stevens, assistant professor in the Departments of Bioengineering and Pathology at the University of Washington, Seattle.

Eniola-Adefeso, Stevens and their co-authors voice concerns that the NIH “does not fully understand the critical deleterious impact of this disparity”, and suggest ways this barrier can be dismantled.

Solutions include an explicit acknowledgement from the NIH that systemic racism in academia exists, instituting policies to immediately achieve racial funding equity, and prioritizing diverse teams for funding and diversifying review panels.

The study has reached an estimated audience on Twitter more than 15 million. It has been covered by 30 online news outlets, and has earned 3 citations to date, according to Altmetric.

3. “A space hurricane over the Earth’s polar ionosphere”

Scientists have observed for the first time the existence of a ‘space hurricane’ in Earth’s upper atmosphere – a persistent swirling mass of plasma (ionized gas) hovering hundreds of kilometres above the North Pole.

Qing-He Zhang from the Institute of Space Sciences at Shandong University in China and colleagues analysed satellite observations in 2014 to confirm the existence of the space hurricane. The space hurricane was found to be 1,000 km wide. Like a regular hurricane, it had a quiet centre, but it rained electrons rather than water.

Prior to this study, such events have only been recorded in Earth's low atmosphere. Space hurricanes have also been observed in the lower atmospheres of Mars, Jupiter and Saturn, and on the Sun.

The paper could help inform designs and methods of space travel and communications, says Zhang.

The paper has been covered by more than 300 news outlets. It’s reached an audience on Twitter of almost 5 million.

This study, which tracked pollen trends across North America over the past three decades, reports that pollen seasons in 2018 were 20 days longer and contained 21% more pollen, as compared to 1990.

Using climate models to test different scenarios, the authors found that an increase in mean annual temperatures due to human activity was likely the dominant driver of changes in pollen season length and a moderate factor in increasing pollen concentrations.

The most significant and consistent increases were in Texas and the midwestern United States, the reasons for which are not yet clear, lead author William Anderegg, assistant professor in the School of Biological Sciences at the University of Utah in Salt Lake City, told CNN.

“One hypothesis might be that the plant species that are found there are particularly sensitive to warming and producing more pollen."

The paper has been covered by 270 online news outlets and has 3 citations to date. It has reached an estimated audience on Twitter of more than 600,000.

5. “Million-year-old DNA sheds light on the genomic history of mammoths”

The data were extracted by Patrícia Pečnerová from the Centre for Palaeogenetics in Stockholm. The specimens were found in the Siberian permafrost in 2017.

According to the analysis, led by Pečnerová and her colleagues, the oldest mammoth specimen, which has been dated to 1.2 million years, belonged to a previously unknown genetic lineage of mammoth.

The researchers called it the Krestovka mammoth, based on the rural Russian village in which it was found, and conclude that it diverged from other Siberian mammoths more than 2 million years ago.

"This came as a complete surprise to us,” says lead author Tom van der Valk from the Centre for Palaeogenetics.

“All previous studies have indicated that there was only one species of mammoth in Siberia at that point in time, called the steppe mammoth. But our DNA analyses now show that there were two different genetic lineages, which we here refer to as the Adycha mammoth and the Krestovka mammoth. We can't say for sure yet, but we think these may represent two different species.”

The paper has been mentioned by 138 news outlets to date and has 6 citations. It has reached an audience on Twitter of more than 6 million.