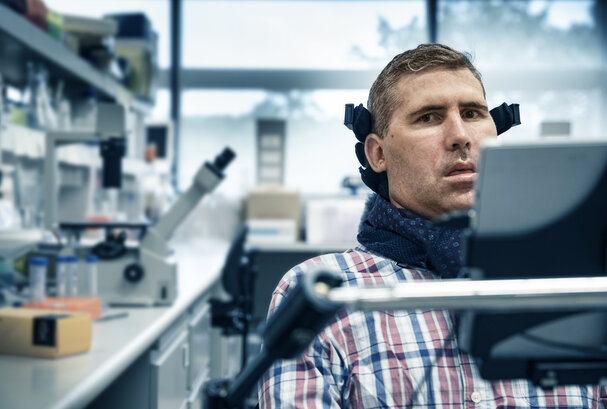 Justin Yerbury, professor in neurodegenerative disorders at the University of Wollongong.

In May 2020, when Australia’s National Health and Medical Research Council (NHMRC) announced the results of its annual Investigator Grant funding round, Justin Yerbury was among the 87% of applicants who missed out.

A professor in neurodegenerative disorders at the University of Wollongong in New South Wales, Australia, Yerbury has motor neurone disease (MND). The condition means he has lost voluntary control of his muscles. He requires daily support from a team of carers, and his breathing is assisted by a mechanical ventilator. Unable to speak or type, he communicates using a device that tracks his eye-movements, and uses an electric wheelchair.

The feedback on his grant application showed that he had narrowly missed the cut, primarily because assessors were underwhelmed by his record of publications. “The track record was promising”, one assessor wrote. “However, relative to opportunity, I was looking for more first- and last-author publications.”

“This made me mad,” Yerbury wrote in a Twitter thread. “How could someone think that I could physically produce more than what I had done given my disability?”

The application form seen by Nature Index referred to a ‘Relative to Opportunity’ policy listing nine circumstances that reviewers could consider when evaluating research productivity. The list included teaching and other workloads, lab relocation, and carer responsibilities, but made no mention of disabilities or other long-term health conditions that might affect an applicant.

It was, Yerbury argued, a “textbook case” of indirect discrimination – a policy that applied equally to everyone, but disadvantaged those with a disability.

Most cases of MND are sporadic – they come effectively out of nowhere. But in Yerbury’s case, the disease runs in his family. Since 1994, it has claimed the lives of six close relatives, including his mother and younger sister. This unfolding family tragedy inspired Yerbury to return to university and study biology. By the time he first began showing symptoms in 2016, he was already a successful and internationally recognized MND researcher.

“A period of research without any barriers has given me clarity around the aspects of academia that provide challenges to certain groups of people,” Yerbury says. Prior to his disability, Yerbury’s weekends and evenings were filled with grant-writing and manuscript-editing.

Now, his work time has strict limits. He also used to travel regularly to visit collaborators and present his work. This too became impossible.

“The value of such trips is immeasurable,” Yerbury says. “Having a disability can mean that you are invisible to your peers.”

Yerbury appealed against the rejection of his grant application and, in November, was informed that he had been successful. His case has also prompted a rethink from the NHMRC.

In an email, Anne Kelso, chief executive of the NHMRC, told Nature Index that “as a result of Professor Justin Yerbury’s correspondence, we have sought to make it clear that the impact of disability on the applicant’s research output should be considered by peer reviewers.”

The revised policy, in place for the current round of Investigator Grants, aims to “take into account salient research opportunity considerations over the course of a research career” when assessing track records. Explicit mention is now made of “disability (including mental health conditions and psychosocial disability) or illness.”

“Professor Yerbury is recognized internationally as a true pioneer in his field,” says Jenny Martin, Deputy Vice Chancellor (Research and Innovation) at the University of Wollongong. “It is heartening to know that, as a consequence of Professor's Yerbury’s appeal, the NHMRC have updated their Relative to Opportunity policy to explicitly refer to disability as a factor affecting track record.”

Martin adds: “It would be great to see other granting agencies follow suit if they don’t have a similar policy.”

Yerbury welcomed the NHMRC’s willingness to work with him, but noted there was “still work to be done to improve upon the policy.”

His experience illustrates the challenges facing researchers with disabilities or long-standing health conditions. In March 2020, a study published in PLoS ONE investigated disability in the context of applications to the Unites States’ National Institutes of Health (NIH).

Although the total number of grant applications increased steadily over the period of 2008 to 2018, applications from individuals or teams including a PI with a disability declined. In 2008, they represented 1.9% of applications. In 2018, the figure was just 1.2%.

Lead author of the PLoS ONE study, Bonnielin Swenor, is an epidemiologist at Johns Hopkins University in Baltimore, Maryland. This research, she admits, is personal. “I’ve been losing my vision for over 15 years,” she says, “and it's tough being a researcher.”

Swenor points out that the NIH does not disclose applicants’ disability status to assessors. As with Yerbury’s case, the problem is not overt prejudice, but the “systemic barriers and challenges” faced by academics with disabilities. 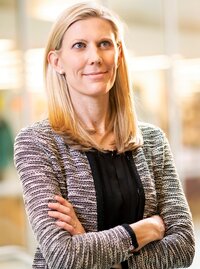 “Certainly the NIH can and is working to do better in this space, but that's never going to be enough,” she says. “The system has to change. Individual institutions have to change the way they think about disabilities. We need equity. We need something different to have the same opportunity.”

In contrast to Yerbury’s experience, Swenor’s disability began well before she had established herself as a researcher. Her greatest challenges came during the transition from being a student to a member of faculty. “No one prepares you for that,” she says. “I had no mentors with disabilities so, to be fair, no one knew how to prepare.”

The situation is similar for researchers with disabilities in the UK.

Kate Sang, director of the Centre for Research on Employment, Work and the Professions at the Edinburgh Business School in Scotland, says that people with a disability often describe the transition from student to academic staff as a ‘cliff edge’ when the institutional support falls away.

“Academic careers are very demanding,” says Sang. “There is a rigid idea of the ‘ideal academic’, which means that gender, race and disability inequality remain stubborn in universities. Unlike gender, there are very few efforts to improve disability inclusion.”

Publicly available data from the UK’s Higher Education Statistics Agency (HESA) provides evidence for this ‘cliff edge’. It shows that in the 2018/2019 academic year, 17.7% of undergraduate students and 14.8% of postgraduate students reported one or more disabilities. But the proportion of academic staff reporting disabilities was much lower, at just 4.1%.

Students are much more likely than academic staff to disclose mental health issues and specific learning disabilities such as dyslexia.

Overall, the rates of physical and mobility impairments, hearing impairment, and visual impairment are similar amongst students and staff.

However, age-stratified data (provided by HESA on request) show that in the youngest age group of academics (those aged 34 and under) the rate of such physical and sensory disabilities is just 0.3%. This compares to 0.9% amongst postgraduate students.

Interpretation of the HESA data is not straightforward. “There really are two trends at play,” says Nicole Brown, lecturer at the UCL Institute of Education in London and author of Ableism in Academia.

The first, she explains, is that certain kinds of work in academia are inaccessible for people with disabilities. The second is that individuals may not disclose a disability, either because they have not come to terms with it themselves, or because they fear the consequences of disclosure.

“Ultimately, whether or not a person discloses their disabilities, chronic illnesses and/or neurodiversities is a cost-benefit analysis, where individuals weigh the costs of stigmatization and repercussions against the benefits of institutional support,” Brown says.

Interpretation of disability data is further complicated by the fact that questions are typically optional. In the HESA dataset, where 4.1% of academics indicated that they had a disability, a further 2.8% of academics declined to answer the question.

The missing data problem is even worse for the NIH data used in Swenor’s PLoS ONE study: 13.3% of grant applicants either skipped the disability question or indicated that they did not want to answer it. Notably, this group had an even lower grant success rate than those who disclosed a disability.

The implications are unclear, Swenor admits. “That's a limitation for sure of this study,” she says.

There is, Swenor adds, “a lot of mistrust” in disability research and room for improvement in how institutions collect information about disability. “There are ways that are validated to ask about disability,” she says, “and it's not ‘Do you have a disability: Yes or no?’”

The ‘chicken and egg’ problem, she says, is that there have not been enough people with disabilities in academia to elevate the issue of institutional support.

“I just happen to be lucky enough to be an epidemiologist,” she says. “This is the kind of work I do. I see that data drives policy, drives change. And that’s like a straight line of progress.”

“The ‘radical’ idea here is that someone with a disability can be an exceptional academic. I do things differently. My brain thinks about things differently because of who I am – all of who I am. We do leave something on the table in innovation when we don't include everybody.”

Yerbury concurs. “Of all the different industries that one could be employed in, I would hope that academia would be particularly open to ideas from a diverse group of people,” he says.

“In biology, we understand that diversity of a population is advantageous during times of change or stress, but this principle also applies to academia.”