The 10 fastest rising institutions publishing in Nature and Science 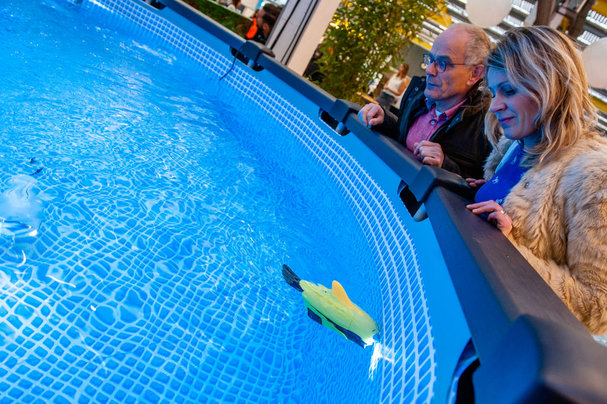 Based on ten years of scientific research at Peking University, tech company, Robosea, has built dozens of underwater robots.

Harvard and Stanford may lead in the number of papers published in Nature and Science, but the University of California, Los Angeles (UCLA) has made some impressive headway.

Not only did UCLA rank sixth in the Nature Index top 10 for number of papers published in Nature and Science in 2018, but it also gained the most ground between 2015 and 2018, its fractional count rising by an impressive 10.65. FC counts an institution’s contribution to articles in journals tracked by Nature Index based on its researchers’ share of authorship.

The second fastest rising in this list, the Barcelona Institute of Science and Technology in Spain, rose by 5.07, but its output in 2018 was less than one-third of UCLA’s.

The ranking measures the biggest absolute improvements in FC in Nature and Science between 2015 and 2018. Other institutions not listed here may have had bigger percentage increases in their FC over the period, or even bigger jumps in FC in a single year, between 2017 and 2018, for example. But it’s the net gain over 2015-2018 that is counted here.

While publishing in Nature and Science is just one measure of many for a high-performing research institute, it’s a closely watched metric. One reason is that, in the prestigious Academic Ranking of World Universities (ARWU), the number of papers published in Nature and Science accounts for 20% of its rankings measure.

See also the top 10 institutions in Nature and Science in 2018.

The University of California, Los Angeles (UCLA) celebrated its 100th birthday this year, and is one of the youngest universities in Nature Index’s top 10 universities publishing in Nature and Science. It receives the most student applications of any university in the US, reporting more than 100,000 freshman applications in the autumn of 2017.

In 2018, UCLA researchers were involved in a study published in Science, which revealed how certain psychiatric disorders share global gene expression patterns.

Another 2018 Science study described how UCLA engineers 3D-printed an artificial intelligence device that identifies objects at the speed of light, a promising development for medicine, robotics and security.

2. Barcelona Institute of Science and Technology

Founded in 2015, the Barcelona Institute of Science and Technology (BIST) encompasses seven of Catalonia’s research centres of excellence. In just four years, BIST has grown to include 670 PhD students, 598 postdoctoral researchers, and 172 principal investigators.

In 2018, BIST made 40 new patent applications and published 1,393 research papers. It counts 27 active spin-off companies and was ranked the 23rd European institution in the Nature Index 2019 Annual Tables.

With 26,000 enrolled students, the University of Zurich is the largest university in Switzerland. Established almost 200 years ago, the institution was the first university in Europe to be founded by a democratic political system.

The University of Zurich is no stranger to pioneering research, counting Albert Einstein and Erwin Schrodinger among its 12 Nobel Prize laureates. The Swiss institution has a strong focus on innovation in biomedicine and life sciences, digitalization, space and aviation.

In 2019, University of Zurich researchers co-authored a study published in Science that described how people are more likely to return a wallet if it’s full of cash. The study was the institution’s most talked-about Science paper this year, according to Altmetrics, and was mentioned in nearly 5,000 tweets and 279 news articles.

The Chinese Academy of Sciences (CAS) is the world’s highest ranked research institute by measure of high-quality research output, as tracked by the Nature Index.

In 2018, its research institutes housed some 60,000 researchers, and it spent 32.23 billion yuan (US$4.6 billion) in science and technology research. It hosts a number of large research facilities, many being the world's biggest of their kind, such as the 500-metre Aperture Spherical Telescope (FAST) in the Guizhou Province.

Peking University was China’s first public comprehensive university, set up in 1898. Since then, it’s been considered one of the country’s two best universities, alongside Tsinghua University.

Located in the Haidian District of Beijing, it stands near the Yuanmingyuan Garden and the Summer Palace, a UNESCO World Heritage Site. Its budgets are much more limited than Tsinghua’s: in 2018 and 2019, its overall budget was 12.55 billion yuan (US$1.82 billion) and 19 billion yuan (US$2.75 billion).

Among the world’s leading natural sciences and engineering universities, the Swiss Federal Institute of Technology in Lausanne (École Polytechnique Fédérale de Lausanne, EPFL) was established as a federal institute in 1969 on the shores of Lake Geneva.

In 2018, EPFL researchers made headlines with a Nature paper describing a new implantable device that could restore mobility in people with spinal cord injuries.

A multinational conglomerate based in California, Alphabet Inc. was formed in 2015 as part of a corporate restructuring of Google. It’s now one of the most valuable companies in the world, reporting its most recent quarterly revenue at US$40.5 billion. Earlier this year, Alphabet was announced as the sixth most prolific corporate entity in high-quality research output in the Nature Index.

Alphabet describes itself as mostly a collection of companies, the largest of which is Google. It also includes health research organisations such as Verily Life Sciences, which works on the glucose-sensing contact lens, among other technologies, and Calico, which is focused on longevity research.

In August, Google Scholar revealed the most influential papers on the platform for 2019, and one was a study by Google artificial intelligence researchers. The paper described their new object-detection system, GoogLeNet, built using a deep neural network system codenamed Inception.

In 1907, the Royal College of Science, the Royal School of Mines, and the City & Guilds College were combined to form Imperial College London. Today, it has 17,000 students and 8,000 staff, and is one of the UK’s top institutions in the Nature Index, ranked third according to high-quality research output.

The college counts 14 Nobel laureates and three Fields Medallists among its staff and alumni, and its pioneering women include Letitia Chitty, who in 1969 became the first woman to receive the Telford Gold Medal, awarded by the British Institution of Civil Engineers, and Dame Margaret Turner-Warwick, who played a fundamental role in the development of modern respiratory medicine.

In October 2019, Imperial College London researchers were part of an international team that published a Nature paper describing a different way that cancer cells gain resistance to chemotherapy, which could provide valuable insight for new drug design.

With more than 800 years of history, the University of Cambridge is one of the world’s oldest higher education institutions, and one of the most prestigious. Since its founding in 1209, more than 100 Cambridge affiliates have received a Nobel Prize.

It claims a role in the creation of some 1,500 tech companies, 14 of which have been valued at more than US$1 billion and two at US$10 billion-plus. It has the largest physics department in the UK and is the birthplace of such pioneering work as identification of the structure of DNA and the splitting of the atom.

More recently, its most highly cited researchers include Sir Chris Dobson, author or co-author of nearly 700 papers and review articles, including more than 30 in Nature and Science, which have been cited more than 50,000 times, and Clare Grey, who uses nuclear magnetic resonance to study lithium ion batteries.

The Pennsylvania State University (Penn State) has US$968 million in annual research expenditures and is one of only two institutions in the US that have been accorded land grant, sea grant, sun grant, and space grant status, the other being Oregon State University. These grants, awarded by the US government, were set up to create networks of colleges and universities working on interdisciplinary research challenges across the country.

A particular focus of researchers in the Penn State College of Agricultural Sciences is how microbiomes – communities of microscopic organisms, for example in the human gut or the soil – influence human health and crop development. They’re also designing a low-cost, integrated system that can identify high-yielding, deeper-rooted crops.

In October 2019, researchers at the Penn State School of Medicine published a study in Nature that suggested there is a direct link between alcohol metabolism and gene regulation in the brain.