Among the world’s academic institutions, these were the largest contributors to articles tracked by the Nature Index. 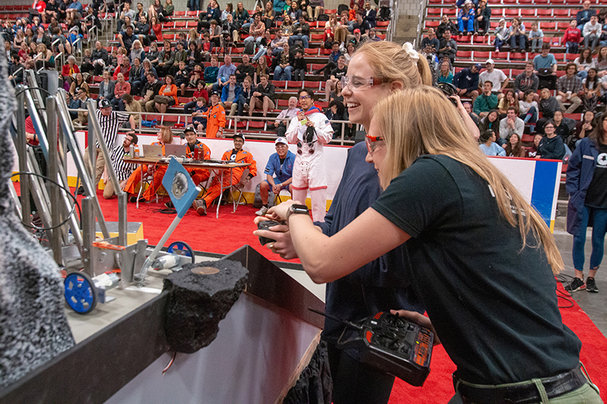 Students compete at MIT's annual 2.007 competition by remotely controlling a robot designed to hoist a flag onto a hillside.

Harvard, Stanford and MIT lead the pack for the fourth year running, having contributed the largest share of articles published in the 82 journals tracked by the Nature Index, as measured by fractional count (FC).

Among the top 10 institutions, China’s Tsinghua University showed the strongest growth in high-quality research output, compared with 2017. The Swiss Federal Institute of Technology Zurich and Peking University also made solid progress in 2018, each climbing the ranks by two places.

One of the oldest universities in the United States, and one of the most prestigious institutions in the world, its full-time faculty number 2,280, with an additional 9,457 full-time affiliated appointees at the Harvard Medical School.

A centre for pioneering work in everything from DNA synthesis and organ transplantation to the first office desktop computer displays and GPS technology, Stanford also appears in the Nature Index top 10 lists for 2018 for chemistry, physical sciences, the life sciences and global research institutions.

The birthplace of Google and Yahoo!, Stanford maintains close ties with Silicon Valley as a centre of technological advancement and entrepreneurship. Its annual budget of $1.63 billion (2018) supports more than 6,000 projects, including the SLAC National Accelerator Laboratory (SLAC) — which has the world’s most powerful X-ray free-electron laser — and Bio-X, where doctors, scientists and engineers collaboratively try to unravel the complexity of the human body.

Renowned alumni include Sally Ride, the first American woman in space, and Richard Taylor, who shared the 1990 Nobel Prize for Physics for research which led to the discovery of quarks.

As one of the world’s most prestigious higher education institutions, MIT has been at the frontier of research for more than 150 years, its close ties with industry fostering an emphasis on entrepreneurship and applied science.

Along with Stanford, MIT also appears in the Nature Index top 10 lists for 2018 in the global research institutions, chemistry, physical-sciences, and life-sciences categories.

“MIT’s motto is Mens et Manus (Latin for “Mind and Hand”), and MIT has a deep-seated philosophy of learning by doing and solving real-world problems,” says vice-president for research, Maria Zuber. “The ethos of the Institute is to strive to apply knowledge and skill to benefit the world.”

With 30 departments across five schools and an annual revenue of more than US$3.6 billion (2018), MIT is replete with specialized research instruments, such as a pressurized wind tunnel for testing aerodynamics; a towing tank for testing ship and ocean structure designs; and one of the largest university-based nuclear reactors in the country.

The University of Cambridge has moved from sixth in 2015 to fifth in 2016 and 2017 in the top 10 rankings for academic institutions, to hit its highest rank in four years in 2018 as the fourth most prolific academic publisher of high-quality research, as tracked by the Nature Index.

Cambridge is one of the world’s oldest higher education institutions, and one of its most prestigious, with a track record of more than 800 years. More than 100 of its staff or alumni have won Nobel prizes and it is the birthplace of significant discoveries such as the structure of DNA, and how to split the atom.

Today, its rising stars include Rogier Kievit, who studies neurodevelopmental changes in cognitive abilities such as reasoning, problem-solving and goal management. Another notable figure is Hannah Critchlow, who has been named a Top 100 UK scientist by the Science Council for her work in science communication and one of the university’s most “inspirational and successful" women.

Founded in 1877, the University of Tokyo is the oldest and largest of Japan’s national universities. It has produced 15 prime ministers, 10 Nobel laureates, and 5 astronauts, among other notable alumni. It also ranks sixth in the world for high-quality research output in physical sciences in the Nature Index, and ninth overall in the Nature Index top 10 research institutions for 2018.

Chemist Hiroaki Suga heads an organic chemistry laboratory at the University and is the co-founder of PeptiDream, a US$5-billion biotech company. Suga is regarded as a key example of how professors in Japan can be successful in both academia and industry, having secured lucrative partnerships with pharmaceutical companies worldwide.

In 2018, its ranks in the categories of chemistry, Earth and environmental sciences, physical sciences and life sciences were 5th, 10th, 11th, and 39th, respectively. It outranks Tsinghua in the academic and chemistry tables, but is outranked in physical sciences.

High-profile alumni include pharmaceutical chemist, Tu Youyou, credited with discovering the malaria treatments artemisinin and dihydroartemisinin – a major breakthrough in 20th-century tropical medicine – and Zhou Guangzhao, former president of the Chinese Academy of Sciences (CAS), known for his pioneering work in particle physics to advance understanding of symmetry breaking.

Established in 1855 as a dedicated science institution, the Swiss Federal Institute of Technology Zurich (ETH Zurich) has a long history of ground-breaking advances, particularly in physical sciences, chemistry and mathematics.

With 500 professors and 260 senior scientists, ETH Zurich has jumped from 9th to 7th place for academic institutions in the Nature Index since 2017. The physical sciences account for almost 40% of ETH Zurich’s papers.

The University of Oxford is the oldest in the English-speaking world, with teaching dating back as far as 1096. Today, it maintains its prestigious reputation with 8th place among the leading academic institutions in the Nature Index. The largest share of Oxford’s scientific output is in the life sciences, with papers in the discipline contributing around one-third of its output.

Research funding provided by councils, trusts and industry is Oxford’s largest source of income, accounting for 26% of its funds — the highest research income of all the United Kingdom's universities. Oxford is also home to the Beecroft Building, a new US$64-million facility dedicated to experimental and theoretical physics with laboratories designed for making precise measurements at the atomic level.

Established in 1911 as a preparatory school for students who would go on to further education in the Unitd States, China’s Tsinghua University became nationally famous in the 1920s, and continued to attract government investment for decades after.

The University of California, Berkeley (UC Berkeley) opened in 1868 with 10 faculty members at its original Oakland campus. Today, it has more than 1,600 faculty, 130 academic departments and 80 interdisciplinary research groups. In the Nature Index, the life sciences, physical sciences and chemistry each account for more than a quarter of its research output.

UC Berkeley, the flagship institution of the University of California system, is home to the Lawrence Berkeley National Laboratory. Founded by Ernest Orlando Lawrence, the Nobel Prize-winning physicist who invented the cyclotron, the Berkeley Lab is supported by the US Department of Energy.

The national laboratory is developing a number of new facilities, including the world’s brightest soft x-ray synchrotron light source, two dark energy detectors, and a supercomputer.

Among the institution’s most discussed papers last year was a study in Cell revealing that the Bajau Laut people of South-East Asia have evolved larger spleens, which enable them to free dive to depths of up to 70 metres.