Singaporean research continues to dominate in some fields 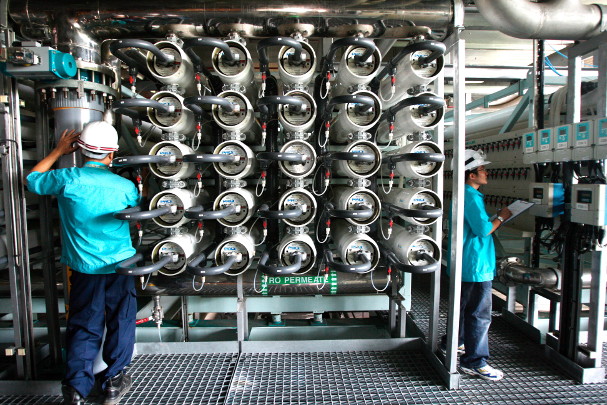 Technicians check on reverse-osmosis units in a NEWater plant in Singapore.

The country has the world's highest per capita investment in science and technology.

Singapore's research performance has improved markedly in life sciences and chemistry between 2012 and 2015, although its output in physical sciences has declined. The city-state, with a population of only 5.5 million, also more than doubled its contribution to Earth and environmental science journals in the same time, albeit off a low base.

With English as the primary language taught in schools, Singaporeans have an advantage in international collaborations. The country also has a steady pipeline of scientists-in-training, about 8,000 doctorate researchers in 2015.

It also benefits from long-term planning and generous science funding, which is done in five-year tranches. In January 2016, Prime Minister Lee Hsien Loong announced a new Research, Innovation and Enterprise plan that sets aside US$13.8 billion for research investment to 2020. That's an 18% increase over the previous one, giving Singapore the world's highest per capita investment in science and technology. The 2016 plan has four pillars: advanced manufacturing and engineering; health and biomedical sciences; urban solutions and sustainability; and services and digital economy.

Singapore has a strong focus on water research, which is driven by water scarcity on its islands. Scientists, led by teams at Nanyang Technology University and the National University of Singapore, have spent decades working with Singapore's Public Utilities Board developing ways to reclaim wastewater using membrane technologies and ultraviolet disinfection techniques. Such systems, known in Singapore collectively as NEWater, now meet about 30% of its water needs.

The organization leading Singapore's public R&D efforts is A*STAR — the Agency for Science, Technology and Research. A*STAR oversees 18 institutes, consortia and centres in disciplines from biomedical engineering to genetics to microelectronics. Biomedical research has been encouraged at organizations such as the Singapore Immunology Network (SIgN). Its researchers coauthored a paper published in Nature Communications last year describing the regulation of gene expression among neutrophils, a form of immune cell. ASTAR's biomedical research portfolio has been diversified to include research in medical technology, food and nutrition and consumer care.

Nanyang Technological University is one of Asia's research powerhouses, ranked 37th in the index's Global 500. Most of the Singaporean university's high-quality research output is in chemistry, but it has also invested heavily in sustainability and environmental research.

Founded in 1991 through a merger between an engineering university and the national institute for teacher training, it was granted autonomy from the state in 2006 and swiftly transformed into a research-intensive institute, taking advantage of increased public funds.