Scientists reveal their sacrifices for the sake of work

Palaeontologists, biologists are among researchers whose social media reflections reveal what they have given up in the pursuit of science. 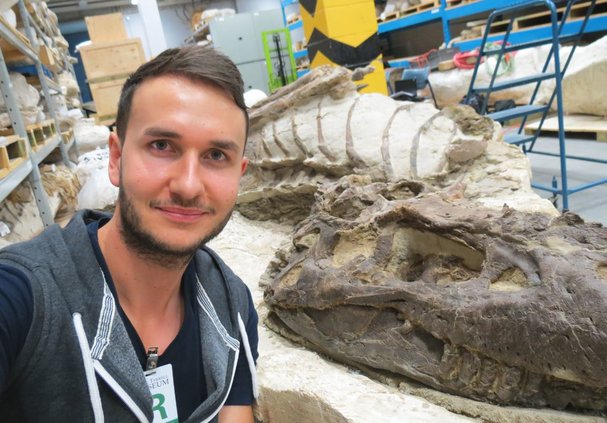 Palaeontologist Dean Lomax with a Gorgosaurus fossil at the Royal Tyrrell Museum in Canada.

At the age of 18, Dean Lomax sold his prized collection of Star Wars memorabilia to help fund his participation in a fossil dig in Wyoming, United States. It was the first of many digs for Lomax, a palaeontologist specializing in prehistoric marine reptiles and dinosaurs.

Ten years later, in April 2018, Lomax, now a visiting scientist at the University of Manchester in the United Kingdom, shared the memory on Twitter with the hashtag #SacrificeScientists. Many scientists have since taken up his invitation to share stories of the sacrifices they’ve made to become professional academics.

“As a palaeontologist I get to work on some incredible projects, but it’s taken so much to get to that stage,” says Lomax, who adds that his health, sanity, social life and finances have suffered.

With very few permanent positions available in the field of palaeontology, his affiliation to Manchester remains unpaid, despite publishing a stream of important papers on giant aquatic reptiles known as ichthyosaurs and other prehistoric creatures. Most recently, he published a paper on jaw fragments of an ichthyosaur discovered in England, possibly the largest ichthyosaur ever discovered.

“I wanted to hear from other scientists, what they’ve had to sacrifice — both funny and serious — and if they think it has been worth it,” he says.

I sold my childhood #StarWars collection to fund my first professional dig - a decade ago. #geek #scientists I want to know what sort of things you've had to sacrifice in order to pursue a career in science? #SacrificeScientists

I had a similar experience, selling off a large swathe of my Warhammer 40k collection a few years back to fund my a new camera for photogrammetry work.

Good to know there's others who need their #Geek fix outside of science/tech!

I sacrificed long term job stability and financial security to return to university, savings and a drum kit to get through uni, and several relationships due to having to move. #SacrificeScientists (I've never sacrificed a scientist, though)

Several said that their marriages had not survived lengthy stints of palaeontological or geological field work.

5 years study at OU to get my degree cost me my social life
Postgrad spending every weekend in the Precambrian of Wales cost me my first marriage.
Money wise ? Must be thousands.

My marriage of 10 years. There were other issues too, but going out to the field and spending time away accelerated the divide greatly.

A very common theme among the palaeontologists who tweeted is that they’ve frequently had to personally cover the cost of attending conferences and meetings, in addition to fossil digs — particularly in the early stages of their careers.

£000s of my own money to subsidise research trips over the years; hundreds of weekends and Bank Holidays; various family/friend social events; damage to my spleen and knees; and a substantial part of my gut flora

Others, such as bee genetics PhD student, Hollie Marshall, at the University of Leicester in the UK, even had to give their pets away.

My mom has adopted my dog, I didn't have enough time and it wasn't fair on him. Breaks my heart thinking about it :( I still have weekend visitation rights though #SacrificeScientists

Some say that pursuing careers in science has meant that — compared to their non-scientist contemporaries — they’ve had to sacrifice monetary security, property ownership, and even making plans to have children.

Everything! Started again from scratch in late 20s. ££s, but also watching my friends buying homes, rising to top job positions, settling with families... , but I'm still *just* a student.
Worth it to pursue something I love though.

For my PhD I moved 10,000 km from home, far from my family and friends. But what I feel is my biggest sacrifice now: I would have become a mother many years ago if I had a normal job back home. With all the uncertainty I don't know if I'll ever be able to have children at all 😔

Lisa Buckley, a curator at Canada’s Peace Region Palaeontology Research Centre, a small museum in British Columbia, says that, for her, financial stability has been the main sacrifice of pursuing her love for palaeontology.

“I have not known if our museum will receive funding to continue the following year. This makes it impractical to make long-term plans for either my research or my personal life,” she says.

How timely! Security and stability were sacrificed in the name of "hoping" our funding situation would improve "next year." It has been a decade of "hoping for next year" now. There's enough data to demonstrate that "hoping" isn't working.

Increased competition for grants, combined with a shortage of permanent jobs in fields such as palaeontology, have meant that many budding researchers are expected to volunteer or perform unpaid work, say both Buckley and Lomax.

Some just won’t take no for an answer. “My passion drives me on to push beyond my boundaries and make things happen,” Lomax says.

He hopes that, through sharing and reading these stories, some scientists might feel less isolated, realising they are not the only ones who’ve made major sacrifices. “That’s important, especially when things get too difficult and you’re close to giving up,” Lomax says.