Scientists reveal the creative side-projects that keep them sane

It’s hard to think about lab problems when you’re dangling upside-down by your ankles. 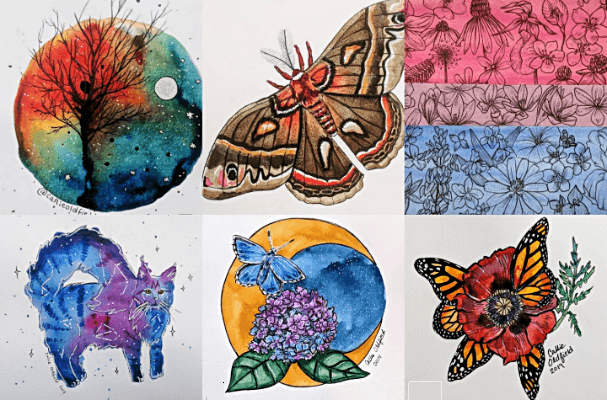 Scientists have taken to Twitter to share their creative endeavours – the hobbies they use to de-stress as they navigate the high-pressure routine of research publishing.

A call-out from Shannon Hall, a neuroscience PhD student at Dalhousie University, Canada, has unearthed varied passions, from art and crafts to baking and sword-making.

The enthusiastic responses point to the importance of such side-projects to early career researchers and PhD students subject to rejection and failure as they seek grants, tenure and publication.

Visual artist - I have been doing lots of commissions in sciart and science illustration for various clients (most in academia, some in gov/industry). Having a creative outlet has been essential for me while I do my PhD! pic.twitter.com/L9GF44uPPU

I write, and believe it or not, it’s even more difficult to be published in magazines than it is in scientific journals. But hey, art for art’s sake and all that.

While creative projects may stem from the urgent need to break free from the parameters of work, they are also of proven importance to maintaining the right mindset to excel at work.

In 2014, a study in the Journal of Occupational and Organizational Psychology found that creative activities were positively associated with experiences that helped people recover from the rigours of the working week, such as mastery, control and relaxation.

A follow-up study in 2017 by San Francisco State University researchers in the Creativity Research Journal found that the “non-work creative activity” people engage in during their personal time can influence whether they return to work feeling reenergized and rested.

Here’s Frank Santoriello, a microbiologist and PhD candidate at the University of Colorado Anschutz Medical Campus:

I do, and it’s been great for my well-being. I draw for stress relief, but I also do commissions and make stickers/t-shirts. It’s a great way to make connections and play with interesting concepts. pic.twitter.com/JYtxCH5unw

And Callie A. Oldfield, a grad student in plant biology at the University of Georgia:

I dabble with watercolor! It's a great form of stress relief pic.twitter.com/ijXnLFfUto

From Sophie G. Elschner, a doctoral student in psychology at the University of Konstanz in Germany, whose research investigates pupillometry, or eye-tracking:

Cool to see everyone's creative outlet! I am more of an artist (mostly illustration and comics, maybe I'll do a science comic one day, haha): https://t.co/x3jA15jN2i. I also knit. #sciart pic.twitter.com/ubnfanFdKz

Others tweeted about their love of baking:

I cook, I bake crazy elaborate cakes, and I draw. pic.twitter.com/V0J31h3SIH

I do circus! Trapeze and acrobatics keep me sane 😊 it’s also hard to think about lab problems when you’re dangling 6 feet from the ground by your ankles... pic.twitter.com/weSjSVtDDY

I sometimes paint, but also have recently returned to cosplay. I'm currently working on building a sword lit from the inside with LEDs. pic.twitter.com/NZKauVvFPJ

In response to the dozens of tweets from scientists chiming in about their creative pursuits, Hall wrote: “You are all a true example that we are all so much more than just our lab work.”

Scientists reveal their sacrifices for the sake of work