A survey of Canadian scientists finds that evidence-based policy is a top priority. 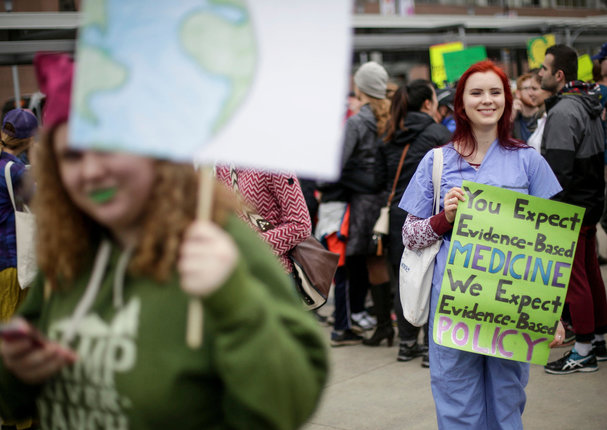 Protesters at the March for Science in Vancouver, Canada in April 2017.

Thousands of scientists around the world are preparing to join the second annual March for Science. Our recent survey of Canadian grant recipients reveal what they might be looking for from their fellow citizens.

The results show that Canadian researchers aren’t content with simply communicating information. They also want to have an impact. Their top reason for protesting is to ensure that policy-makers use scientific evidence.

Our study is among the first to look specifically at why scientists might take to the streets.

We sent our survey to almost 7,000 scientists who had received a prestigious Canadian federal research grant between 2012 and 2017, and received 1,142 responses. We asked researchers to rate the importance of six potential goals for engaging with the public on a scale of 0 to 100.

Half the scientists were polled on their reasons for protesting through marches, rallies, door-to-door campaigns and support of petitions. The other half were asked identical questions about goals for face-to-face contact with the public, such as through lectures or presentations.

While both groups rated the six goals similarly, lower scores among the group we asked about protest might reflect an expectation that protest is somewhat less effective in achieving their goals than other forms of engagement.

Scientists in both groups scored evidence-based policy-making highest, giving it an average score of 83 out of 100.

We also asked scientists about their objectives for communicating with the public. Their top priorities were to inform people about scientific issues and generate excitement about science.

Canadian scientists also prioritized objectives related to trust, such as showing that they care about society’s well-being, demonstrating expertise, and demonstrating openness and transparency.

Engaging in trust-building, rather than simply sharing knowledge, might be advantageous to scientists in effectuating change. Substantial research shows that beliefs about decision-makers and the desired behavior are important factors in behavior change.

Scientists place some importance on the objective of discrediting people who spread myths. This could be problematic for achieving their goals as research suggests that aggressive attacks by scientists can make them seem less trustworthy.

Listening was the least-prioritized objective. This does not align with the desire to foster trust, and the emphasis that science communicators put on establishing meaningful dialogue.

On a seven-point scale of Canadian scientists’ willingness to engage, respondents were most open to direct interaction with the public, policy-makers and journalists, and least inclined to connect with audiences online.

About two thirds (63%) of scientists who responded to our survey said they had taken part in at least one face-to-face public engagement activity in the previous year and nearly as many (60%) said they had talked to a journalist. Smaller percentages had attempted to engage online (42%), with policy-makers (39%), or through some form of protest (28%).

For many of those planning to march for science today, it might well be a first. Policy-makers, we hope you’re listening.

John C. Besley, is the Ellis N. Brandt Chair in the College of Communication Arts and Sciences at Michigan State University. He studies public opinion about science and scientists’ opinions about the public.

Kathryn O’Hara recently retired as the holder of the CTV Chair in Science Broadcast Journalism at Carleton University's School of Journalism and Communication in Ottawa, Ontario.