Strong government policies and research insights are essential to deliver on a pledge to clean up the sea. 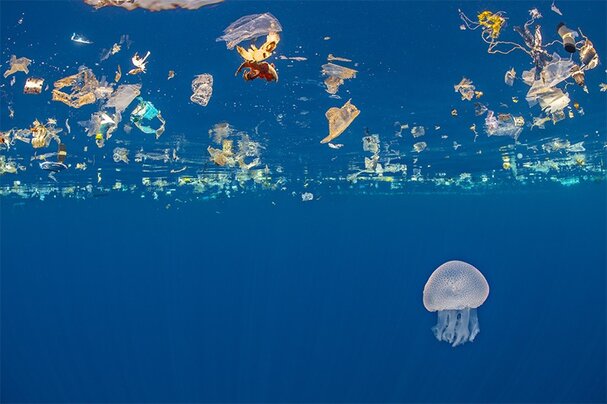 Many stories have been written about the ‘Great Pacific garbage patch’, a name evoking a vast Sargasso Sea of plastic bottles and bags. But the reality is that much of this debris has been broken down into a murky suspension of ‘microplastics’ spanning an area three times the size of France.

In 2020, Li and his colleagues found that microplastic debris is highly concentrated in even the deepest underwater trenches (G. Peng et al. Water Res. 168, 115121; 2020). Staving off this influx of pollutants is a target of the United Nations’ Sustainable Development Goal (SDG) Life below water (SDG14), with its aim to “prevent and significantly reduce marine pollution of all kinds” by 2025.

Between 4.8 million and 12.7 million tonnes of plastic waste entered the oceans in 2010, according to a study in Science, and those numbers are expected to increase dramatically by 2050 without improvements to waste-management infrastructure (J. Jambeck et al. Science 347, 768–771; 2015).

Scientists in China, which is a major producer and importer of plastic waste, are taking the lead in amelioration. According to the 2021 UNESCO Science Report, floating plastic debris was the fastest-growing area of SDG-related research in 2012–19 (see ‘A buoyant field’).

Publications from the Chinese mainland on the topic jumped from 7 in the period 2012–15 to 286 in 2016–19, placing it third by volume after the United States and United Kingdom.

Much of this work has come from investigators in Beijing, the top-ranked city in the Nature Index for SDG14-related research. (For more information on the analyses used in this article, see ‘A guide to Nature Index’.)

Li is sceptical that much can be done to eliminate existing plastic pollution. “But what we can do is stop them entering to the ocean,” he says. His team has developed a monitoring framework that outlines ‘gold-standard’ technologies and assays for detecting and quantifying microplastic contamination.

Government action is essential to stem the flow of plastic debris. UNESCO reports that 127 countries have adopted legislation to regulate plastic bags. In 2020, China launched an ambitious effort to ban plastic bags nationwide by 2022 and cut single-use plastic in restaurants by one-third by 2025 — although the COVID-19 pandemic created a surge in demand for delivery that derailed this effort.

Despite the many hurdles to overcome, Li feels positive about the future. “I am pretty confident that we could meet the target set for SDG14,” he says, “but when we realize those challenges, we should keep going.”