Research in China is complicated by the Communist Party’s influence, says researcher who worked there

A scholar who moved to the U.S. from China as a child went back to China to conduct research as an adult. She found vast differences in approach. 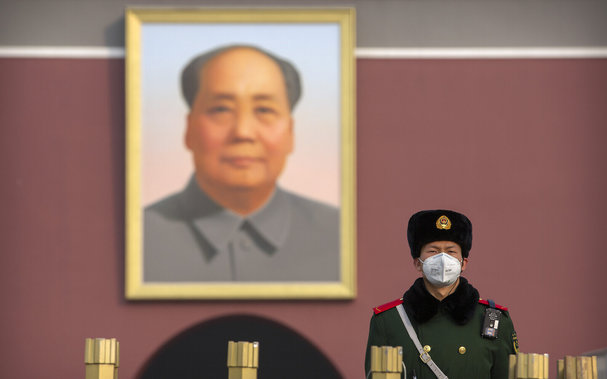 A large portrait of Mao Zedong at Tiananmen Gate adjacent to Tiananmen Square in Beijing, Jan. 27, 2020.

What is the coronavirus? How does it spread? Should I be worried? When a new virus surfaces, the unknowns loom big. When a new virus comes out of China, potentially clarifying information needs to be weighed and considered alongside the realities of practicing science and research there.

I am a social scientist, specializing in psychological anthropology and mental health in China. I was born in China and immigrated to the U.S. as a child with my parents, who came for graduate school.

I’ve been working with psychologists, therapists, psychiatrists and other medical professionals in China since 2011. I’ve worked on research projects that were commissioned by Chinese Communist Party departments, as well as more personal projects driven by a researcher’s passion for improving the life and health of an underserved community. Although I’ve not worked on research projects concerning the coronavirus, I’ve experienced and observed firsthand the challenges a research scientist faces in China across a variety of health-related projects.

Since I began fieldwork pre-2013, also known as pre-Xi Jinping, there’s been a noticeable progression in how both I and Chinese researchers approach projects. In addition to fulfilling the requirements for a research visa, it is normal practice for researchers anywhere to depend on collaboration with local universities for access to data, interviewees and sites.

As China’s fast-growing higher education system is mostly state-owned, politics has always influenced Chinese academics. Not all university researchers are members of the Chinese Communist Party (CCP), but I have found every department typically has at least one if not more among both faculty and students.

During fieldwork, I would attend department meetings, talks and classes that some students and faculty would routinely miss due to mandatory attendance at Party meetings and classes held on campus. Party ideology classes on Marxism, Mao Zedong thought, etc. are mandatory courses for undergrad and graduate students, though to be fair, I should note that many students skip or take naps during these large lecture classes.

It has never been advisable or especially feasible for foreign scientists looking to conduct research on certain sensitive topics, such as the famous Three T’s – Tiananmen, Tibet and Taiwan. Potential local research collaborators must make their careers within institutions embedded with CCP members and party ideology.

Concern about how research may reflect on the CCP stands even for research not on the Three T’s, though. Research funding still comes from the government, and academic careers in China rely almost exclusively on researchers’ ability to do and publish research. Professors get paid for each paper they publish. The amount varies depending on the rank or impact factor of the publication.

It is interesting to note that, because international journals and publishers are generally ranked much higher than Chinese publications, Chinese researchers often end up publishing research on problems in China for the eyes of outsiders. I’ve helped edit articles about grief processing in Chinese children orphaned by the HIV/AIDs blood donation scandal, internet gaming addiction in youth and PTSD screening in rural Chinese children.

Any of these articles could be potential jumping-off points for serious criticism of the corruption, inefficiency and negligence of the CCP system. But those connections to the system are not made publicly explicit, at least to my knowledge. Research gets separated from the social and political context, localized and individualized.

The grief-processing and PTSD articles that I helped edit, for example, focus on testing and developing diagnostic models and interventions. The emphasis is on what can and should be done now, which in and of itself is an important research project. By providing minimal insight into what led to the situation in the first place, however, a reader unfamiliar with the greater Chinese context misses out on unequal and powerful structural forces created and enforced by the CCP-led system. Instead, researchers and officials alike often invoke “traditional Chinese culture” and place responsibility on the immediate individuals involved. Or, they claim that local politics are holding up the central government’s directives somehow.

On a research trip to rural Hunan province concerning the lack of effective primary medical care, I saw local party members try to deflect blame not by criticizing the CCP per se but by blaming lack of resources and asking us, the foreign researchers, for funding. Even at the local level a researcher has to be careful, as access to rural communities can be ruled tightly by local officials who are somewhat outside the reach of the central CCP in Beijing.

In my experience, the move toward decontextualizing research from larger social and political structures has gotten more absolute over time. Now it can be risky to write at all about any potentially unflattering social reality, especially when it comes to health. Buzzfeed News recently reported on arrests for “spreading rumors” about the coronavirus, including the detention of the initial eight in Wuhan who raised the alarm.

It’s no longer just the Three T’s that are off-limits; the boundaries have become opaque. The opaqueness of CCP actions is only matched by their real impact in people’s everyday lives. I saw this firsthand during the passage of the mental health law in 2013, which among many things, eliminated a counseling licensing system overseen by the Ministry of Labor and created an unclear, undefined distinction between psychological counseling (咨询) and psychotherapy (治疗) that is more medicalized and favors hospital care.

Even though a few of the most senior professors in the psychology department I was affiliated with were supposedly consulted and invited to meetings during the writing of the law, there were multiple department meetings where psychology and counseling students and faculty alike struggled to understand the vague rules and purpose of the law. A popular theory was that the law was the result of an internal struggle between the Ministry of Health and Ministry of Labor, with the Ministry of Health gaining the upper hand this time.

Another consequence of the opaqueness of the CCP is the “businessfication” of higher education. For example, the psychology department I affiliated with has spun off a business development group. Some professors and their graduate students are working on developing books and courses they can sell to the general public. As a viable career in truthful and rigorous research becomes more and more limited, I see Chinese academics redirecting their energy towards packaging their existing knowledge to sell to consumers as a long-term business outside the university.

In a system where conducting research can be at great professional and personal risk to a scientist, it is not hard to imagine the challenges involved in current scientific work on the coronavirus in China.