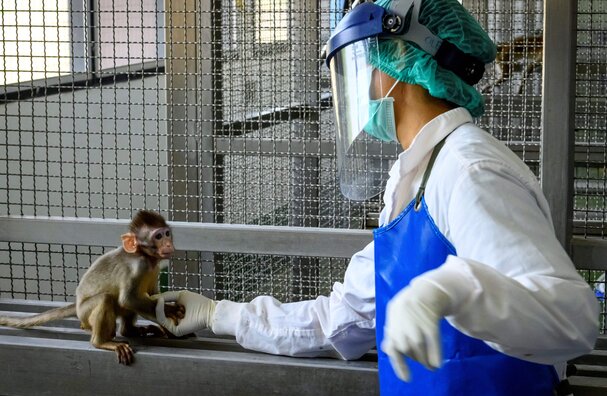 In May 2020, scientists from the National Primate Research Center of Thailand at Chulalongkorn University in Saraburi had begun testing a COVID-19 novel coronavirus vaccine candidate on monkeys, such as longtail macaques. A juvanile is seen here interacting with a laboratory employee.

When California issued a ‘shelter in place’ order in March 2020 to curb the spread of COVID-19, her lab was forced to dramatically reduce the number of staff on campus. Many rodents were “sacrificed ahead of time”, says Gray, as her lab was only able to keep those that were critical to ongoing studies.

“[Our institution] did its best to allow us to continue experiments without having to do massive amounts of euthanasia,” says Gray, who left her lab manager role at the University of California, San Francisco in August. “A lot of other labs across the country were not so lucky.”

In the early stages of the pandemic, reports of university labs culling hundreds or thousands of mice threw a spotlight on a system that depends on live subjects. Experiments were abandoned or put on hold, all at an incalculable cost to the international research community in time and resources.

Some hope that the disastrous effects of the pandemic on research reliant on animal-based testing will motivate researchers and institutions to be more open to alternatives, such as in-vitro (cell cultures), in-silico (computational simulations) and 3D models of organs and tissues.

Models of the human brain, for example, have been built using induced pluripotent stem cells (iPSCs). Derived from human skin or blood cells, iPSCs are ‘reprogrammed’ to an embryonic, or pluripotent, state. They can be developed into different cell types, such as motor neurons and liver cells, for applications in toxicology and disease modelling, and to observe host-pathogen interactions.

In February 2020, researchers at the Johns Hopkins Bloomberg School of Public Health in Baltimore, Maryland described how stem-cell-derived ‘mini-brains’ called BrainSpheres could be used to identify the harmful side effects of paroxetine, a common antidepressant.

BrainSpheres have also been used to study viral infections such as Zika and Dengue. In June, the Johns Hopkins team explained how they used BrainSpheres to investigate whether SARS-CoV-2, the virus that causes COVID-19, can infect human brain cells.

'Mini-lungs' grown from human tissue donated to hospitals in the UK are another promising alternative to animal models. Researchers from the University of Cambridge, UK and Seoul National University Hospital in South Korea reported the use of these tiny three-dimensional tissue cultures to observe how COVID-19 damages lung tissue in a December edition of Cell Stem Cell.

Non-animal alternatives such as these have advanced rapidly over the past 20 to 30 years, but continued support from governments and institutions is crucial to ensure that new iterations keep pushing the limits in closely resembling human biology, says Francesca Pistollato, who studies alternatives to animal testing at the Joint Research Centre of the European Commission in Ispra, Italy.

“There is a need for new regulatory approaches, and to persuade research funding bodies and the scientific community at large that it is important to allocate more resources to methods that are more reliable, useful to humans, ethical and ecologically sustainable,” she says.

In the United States, both the Environmental Protection Agency and the Food and Drug Administration have committed to substantially reducing animal testing in research institutions, announcing new policies in 2019 and 2018, respectively. But inconsistencies in how the US regulates animal experimentation make it difficult to keep track of the actual numbers in use in any given period.

Rodents, such as mice and rats, represent roughly 95% of animals used for biomedical research in the US, the Foundation for Biomedical Research, a non-profit based in Washington, DC, estimates. This could equate to more than 20 million individuals being used at public and private institutions across the country each year, according to Speaking of Science, an international group that advocates for the use of lab animals.

Birds, mice and rats are excluded from the Animal Welfare Act (AWA), the only federal law in the US that regulates the treatment of animals in research, exhibition, transport and by dealers.

Signed into law in 1966 and enforced by the US Department of Agriculture (USDA), the AWA has been amended several times since. In one such amendment, made in 2002, the definition of "animal" was written to specifically exclude birds, rats of the genus Rattus and mice of the genus Mus bred for use in research.

Proponents of the exclusion argued that most birds, mice and rats used in research are already protected through the US National Institutes of Health and other federal funders, and through institutional policies.

Critics of the exclusion say it’s resulted in the absence of a centralized record of how many of these animals are being bred, bought and disposed of in the US. The use of other animals, such as cats, dogs, rabbits and non-human primates, is more closely monitored.

“It leads to a lack of transparency, as one does not even know how many animals are used in science in the US,” says Kathrin Herrmann, a researcher in animal welfare science, ethics and law at the Johns Hopkins University Center for Alternatives to Animal Testing in Baltimore, Maryland.

Efforts to reduce and replace animals in research are guided by the Three Rs Principle, widely accepted by the international research community as best-practice for animal-based experimentation.

Proposed more than 60 years ago by British scientists William Russell and Rex Burch, the Three Rs Principle calls for the replacement and reduction of animals where possible, and the refinement of methods to ensure minimal suffering.

The problem, says Erwan Bezard, director of the Institute of Neurodegenerative Diseases at the University of Bordeaux in France, is that while this principle is good in theory, in practice, it can drive the kind of wasteful behaviour it was designed to mitigate.

For the past 20 years, Bezard has been studying conditions such as Parkinson’s Disease using non-human primates, including baboons and macaques. As there is no substitute for animal testing in his area of research, he says, knowing how to use this resource efficiently is crucial – and using fewer animals in an experiment is not always the answer.

“My main ethical concern with the use of animals is when I see an experiment that does not use enough animals to do a proper statistical analysis. To me, it means that these experiments are flawed and that the animals have been used for nothing, because we can't draw any valid conclusion,” says Bezard, who has labs in France and China.

“It would have been far better to use more animals, to be able to draw a sound conclusion. Then you won't have to repeat the experiment,” he adds. “So, we have to reduce, yes, but we have to reduce with a scientific approach in mind.”

Owing to well-funded advancements in animal-based methods, such as optogenetics, which gives scientists the ability to control neurons within the brains of genetically engineered animals using light, and pharmacogenetics, which shows how genetic variation might impact responses to new drugs, there is a boom in the use of animals around the world, rather than a reduction, says Bezard.

The speed at which animal-based experimentation can be carried out is also accelerating.

The Pfizer-BioNTech and Moderna teams that developed COVID-19 vaccines, for example, were given regulatory approval to run animal tests simultaneously with human trials to dramatically cut the timeline for development. So dramatically, in fact, it prompted a misconception among some members of the public that they had skipped animal testing altogether.

“There are some questions that you have to deal with using animals,” says Bezard, citing research related to complex physical functions, such as walking, and psychological behaviours. “You cannot run cognition studies in a Petri dish.”

The impacts that animal-based research methods can have on the mental health of researchers is seldom discussed. The issue became more prominent during the early months of the pandemic due to the scale of mass killings and the speed at which they were carried out.

While efforts are made to minimise suffering in living subjects, working with animals in research requires resilience from researchers and support from leadership, says Bezard.

For Lindsay Gray, routinely following mice through their lifespan in the lab, performing surgical procedures and behavioural experiments, and ultimately euthanizing them, wore on her in a way that working with flies didn’t.

“It was a conflict that tipped the scales for me,” says Gray. “I think an aspect of academia that is too often overlooked is the emotional and mental toll that doing this kind of work takes on researchers.”

Bezard has a keen understanding of where the limits to the necessary resilience may lie.

“You have to be very careful with the feelings of staff, students and researchers in order to assess what they can do,” he says. “I know from experience that you cannot ask a researcher who has been working with the same primates for two years to terminate them. It is impossible.”

With this in mind, within Bezard’s teams, different people perform different steps to lessen the emotional toll.