The Japanese capital is a hub of local research collaborations. 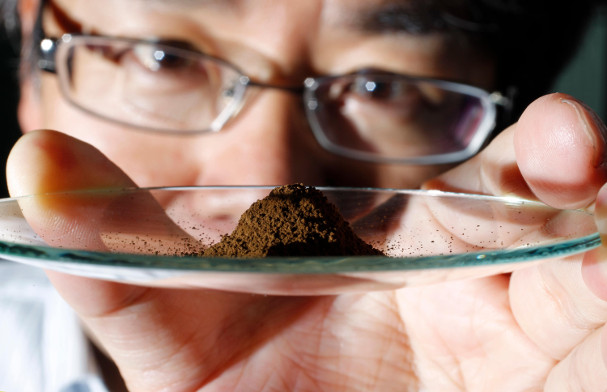 Yasuhiro Kato, of the University of Tokyo's Frontier Research Center for Energy and Resources, and his team found clusters of the rare-earth elements in the Pacific Ocean.

In 2011, a team of Tokyo scientists made a startling discovery that had huge economic potential. Across vast stretches of the Pacific Ocean seafloor, they found clusters of the rare-earth elements needed to manufacture high-tech devices such as lasers, compact fluorescent light bulbs, medical equipment and smartphones.

Five years later, the researchers from the University of Tokyo, the Tokyo Institute of Technology and the Japan Agency for Marine-Earth Science and Technology (JAMSTEC) are still working together and publishing papers. They recently uncovered the conditions that help form these hotspots of rare-earth elements.

When it comes to forming successful research partnerships, new data from the Nature Index reveals Tokyo is also a hotspot of local collaboration. There were 925 partnerships between two Tokyo institutions in 2015 — second in the index only to Paris for intra-city scientific collaborations. The top 50 partnerships are show on the map below.

What’s on the map: Circles show an institution’s contribution to journals in the index, a measure known as fractional count (FC). Lines denote collaborations between pairs of institutions in the Tokyo metropolitan area on papers included in the index. Line thickness represents the strength of a collaboration between two institutions, which is measured by bilateral collaboration score.

With a regional population of 37 million people, Tokyo — the world’s most populous metropolitan area by many rankings — has the second highest number of organizations publishing in index journals, after Beijing. The contribution of those 201 institutions accounted for close to a third of the country’s high-quality science last year. “The very concentrated city, Tokyo, plays an important role as a hub of scientific activities in Japan,” says earth scientist Hikaru Iwamori, a member of the rare-earth minerals team from JAMSTEC.

The University of Tokyo, the country’s highest ranked institution in the index, is the epicentre of that hub (see graphic). It was a partner in one out of every eight collaborations in Tokyo last year, including eight of the ten strongest partnerships. Its collaboration with the RIKEN Center for Emergent Matter Science was the city’s most productive.

The university is part of several long-term programmes to foster innovation and new technologies with others, such as the 4 Universities Nano/Micro Fabrication Consortium, a project that began in 2008 to develop engineering and construction methods for objects that are smaller than 1 micrometre. The consortium, which receives funding and cooperation from national and local governments, also involves some of Tokyo’s other top institutions such as Tokyo Institute of Technology, ranked 7th in Japan, Keio University (12th) and Waseda University (17th) in 2015.

“Active collaborations among different universities in Tokyo can be attributed to the concentration of competent universities,” says geologist Yasuhiro Kato, a professor in the University of Tokyo’s Frontier Research Center for Energy and Resources who leads the rare-earth minerals research team.

When Kato needed help decoding a massive collection of data on the chemical composition of nearly 4,000 samples of deep-sea sediments, he turned to Iwamori for his expertise in statistical analysis. “We know that there is a limit to what can be done by each researcher or a research group having similar knowledge and skills, and therefore believe we should actively collaborate with people who have what we lack,” says Kato.

Using a statistical method called Independent Component Analysis (ICA), which was first used in neuroscience and information science, Iwamori helped the team sift through the data. By combining Iwamori’s analysis with the team’s observations from individual samples, they concluded that a sufficiently slow sedimentation rate allowed the sea-floor to absorb rare-earth minerals from seawater over 65 million years. “In collaborations, different techniques and ways of thinking can bring new and robust ideas,” says Iwamori.

It also helps that Kato and Iwamori have been friends since they were classmates at the University of Tokyo more than three decades ago.

The pair still meet up, something Iwamori believes is important for successful collaborations. The rare-earth minerals team met to examine their data using 3D rotating diagrams, which led to deeper interpretations of the results.

“Face-to-face discussion is different from email-based discussion. It is much more informative and interactive, and quicker perhaps,” says Iwamori, who is also a visiting professor in Tokyo Institute of Technology’s Department of Earth and Planetary Sciences.

Tokyo’s high concentration of universities also means many conferences and symposiums are held in the city each year. Such a situation facilitates new encounters between scientists in different fields.

Once researchers get to know each other, their collaborations will last even after some of them move to other universities outside the city, says Kato. He recently started collaborating with microfossil expert Tetsuji Onoue from Kumamoto University, more than 900 kilometres south-west of Tokyo, after the two were introduced by a colleague.

Their work combined Onoue’s skills identifying microfossils with Kato’s chemical analysis expertise to study an extinction event in the Triassic. “It enables us to investigate one research subject much more multilaterally and comprehensively, and to propose the more interesting scientific story,” says Kato.

Read more: The city with the highest number of research partnerships